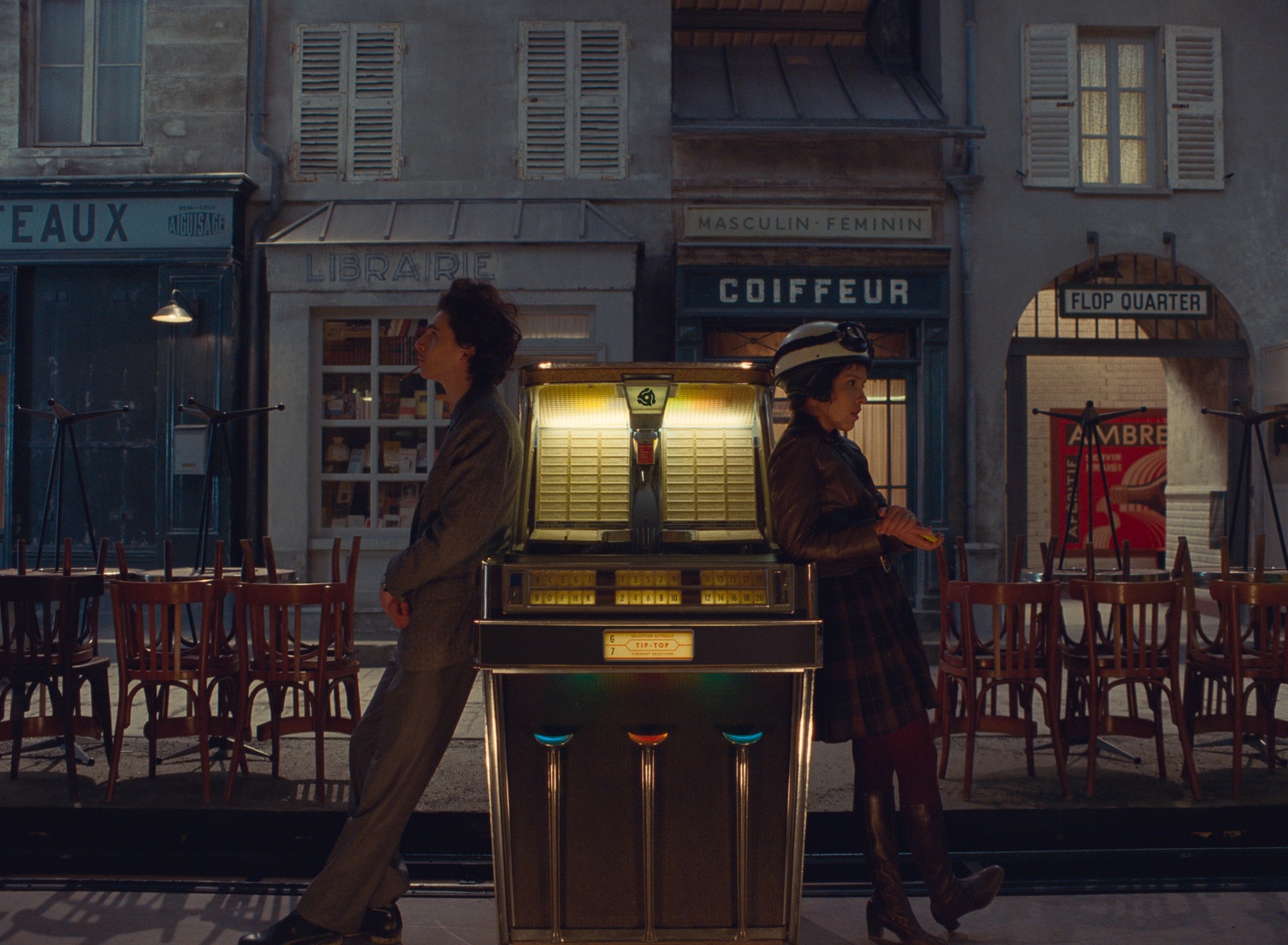 Timothée Chalamet and Lyna Jhoudri in Wes Anderson's "The French Dispatch." By Courtesy of Festival de Cannes
By Aissatou B. Diallo, Contributing Writer

Wes Anderson’s distinct filmmaking style remains dreamy. His latest film “The French Dispatch,” which The Crimson reviewed at Cannes, is set in the fictional town of Ennui-Sur-Blasé, France. In this fanciful setting, a group of writers’ stories for the film’s fictional eponymous newspaper come to life after the death of their beloved editor-in-chief, Arthur Howitzer Jr. (Bill Murray). Anderson structures his film as a theatrical anthology featuring three distinct central stories and their writers: “The Concrete Masterpiece” by J.K.L. Berensen (Tilda Swinton), “Revisions to a Manifesto” by Lucinda Krementz (Frances McDormand), and “The Private Dining Room of the Police Commissioner” by Roebuck Wright (Jeffrey Wright). In 108 action-packed, quirky minutes, Anderson pays homage to the exceptional real-life writers and journalists that inspired the film. But the film isn’t just witty and lovable because of its premise: Anderson pays undivided attention to costuming and set design, making “The French Dispatch” an unforgettable tribute.

Herbsaint Sazerac (Owen Wilson), who writes “The Cycling Reporter,” claims the first standalone chapter of the film. Sazerac appears in dark green khakis and a long sleeve beige pullover, complemented by a black beret and a camera strapped around his neck. As Sazerac narrates cycling through “a day in Ennui,” each set in his village is given intricate visual detail and a rich history, embodying the symmetry and pastel scenery that typifies Anderson’s unique vision and, in the context of the movie, springs from the magazine writers’ imaginations. His vintage orange bicycle is not just a stylized way to journey across this small town but also a symbol of the setting’s charming appeal. As a classic reporter in both attire and demeanor, Sazerac acts as a familiar guide to the audience, breaking the fourth wall to literally invite the audience through his story.

But this is no understated tale, and Anderson has more quirkiness to offer. Each article in Howitzer’s magazine consists of climactic and often humorous backstories with characters that, in true Anderson fashion, are eccentric and surreal. For instance, the melodramatic J. K. L. Berensen (Tilda Swinton) presents a hilarious tale of a prisoner-turned-artist in “The Concrete Masterpiece.” The writer’s absurdity is reflected in her orange and yellow attire, red hair, and gold jewelry. Her costuming validates the theatrical and artful story she tells, as well as her infatuation with artist Moses Rosenthaler (Benicio Del Toro).

In “Revisions to a Manifesto,” Anderson switches up his visual style again: This time, the costumes and coloring embody a formal and muted academic aesthetic. College radical Zeffirelli (Timothée Chalamet) is a helpless teenager in a perfectly-tailored grey suit. Against the mustard yellow of the Sans Blague cafe, his dark suit is complemented by a form-fitting black sweater underneath, a cigarette, and an obviously deliberate messy shag. Juliette (Lyna Khoudri), another teenage character, sports a brown leather jacket and a knee-length plaid skirt — half-teen, half-revolutionary. Both of these characters want to be taken seriously, and their wardrobes reflect their resulting anxiety and inadvertent narcissism.

Anderson’s set design adds another layer of meaning to his characters beyond their candid delivery of lines and unconventional outfits. His focus on aesthetics turns every shot into a visual embodiment of fabulously-detailed magazine writing. “The Concrete Masterpiece” is an easy-to-miss example of this artistry. The prison inhabited by artist Moses Rosenthaler and his prison guard muse, Simone, is carefully scrubbed of any color or detail. The set’s grey-and-white walls, wooden floors, miscellaneous scaffolding, and greyscale high ceilings do not seem to warrant a second glance. Yet, on closer inspection, the black and white adds an illusory, balanced lens to the cinematography. Much like Rosenthaler’s character itself, the prison’s atmosphere feels somewhat inscrutable. In one scene, art buyer Julien Cadazio (Adrien Brody) attempts to learn more about the artist as the grey smoke from both their cigarettes subtly blends into their backgrounds. But Rosenthaler is imprisoned, emotionally unavailable, and throws tantrums to create his art, which resembles children’s drawings. The implied seriousness of his dull black and white setting amplifies and even pokes fun at the ridiculousness of J. K. L. Berensen’s story. The sets in “The French Dispatch” are themselves reliable narrators and are the reason that audiences buy into the world that each writer has created.

Needless to say, “The French Dispatch” builds on Anderson’s popular filmmaking style, and his well-established artistic choices work well as affectionate depictions of the creative minds of writers. It is as Wes Anderson as a viewing experience can get, not just because it is made up of quaint characters, sets, and costumes, but because his aesthetic goes hand-in-hand with the film’s premise. Nothing is more imbued with nostalgia than a storybook come to life.