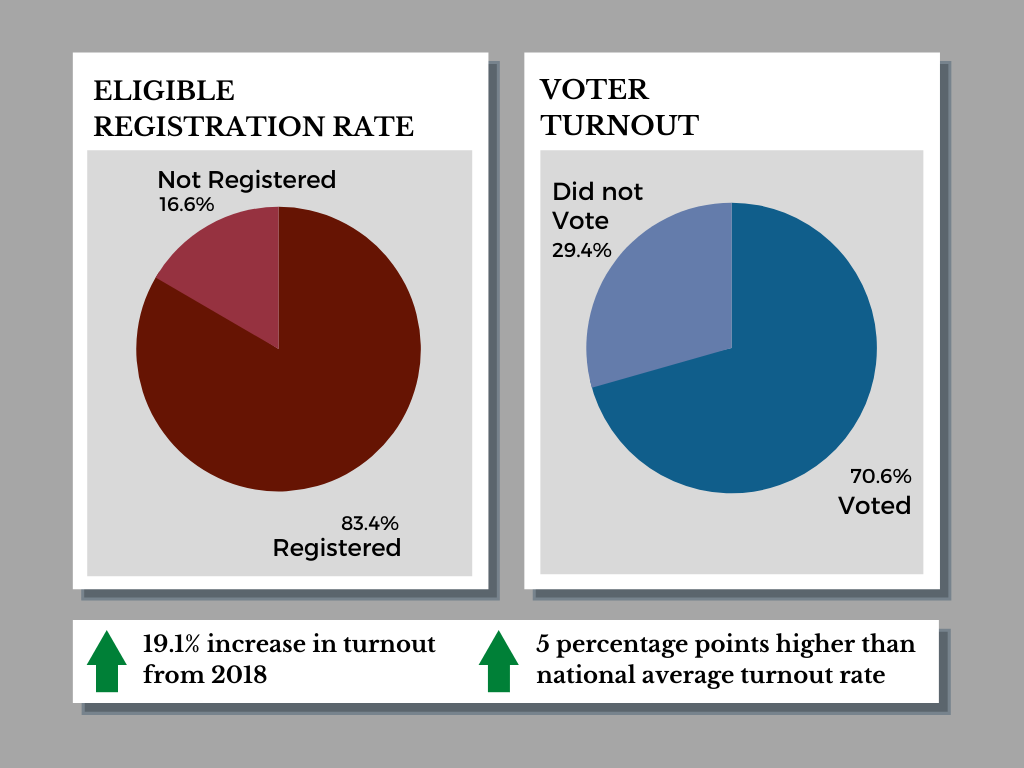 Nearly 71 percent of Harvard University students eligible to vote cast ballots in the 2020 election, jumping roughly 9 percentage points from the previous presidential election cycle, according to data released last week by the National Study of Learning, Voting, and Engagement.

According to its 2020 national report, Harvard University had a 70.6 percent overall eligible student voter turnout rate in the 2020 election and an eligible registration rate of 83.4 percent. Harvard’s overall student turnout rate — which was five percentage points above the national student average — represents a 9.3 percent increase from 2016 and a 19.1 percent increase from 2018.

Harvard students who worked to increase student turnout in the 2020 election celebrated the study’s findings.

Founded in 2018, Harvard Votes Challenge is a student-run and university-wide initiative that is co-run by the Institute of Politics and the Ash Center at the Harvard Kennedy School. HVC aims to expand voter registration, turnout, and civic engagement among University affiliates.

“Encouragement from the president of, say, the Asian American Association, is much more powerful than some random person texting you to vote in the 2020 election,” Park said.

He added Covid-19 had the unintended positive consequence of empowering students to take initiative to navigate the voting process.

“If there’s one silver lining through kind of the pandemic was that a lot of students gained experience in voting in difficult conditions,” Park said.

Kevin L. Ballen '22, a former co-chair of the HVC and current vice president of the Institute of Politics, said HVC specifically tried to promote civic engagement among affinity groups in 2020.

“We did a lot of work with cultural affinity groups across the 2020 election, building a variety of different coalitions and really sort of investing in leaders of these different organizations,” Ballen said.

Ballen said the study confirms that students make up a powerful voter bloc in the electorate.

“Now it’s time to engage us and factor us in when you’re making decisions or when you’re going out in your campaigns because we’re going to show up at the polls and our generation is going to have increasing influence every single year,” he said.

HVC Co-Chair Lily Richman '24 said that despite high voter turnout among Harvard students in the last election cycle, she believes there is still room for growth.

“We want to reach the final twenty-nine percent and we want to make sure that every student who is eligible to vote turns out and votes,” Richman said.