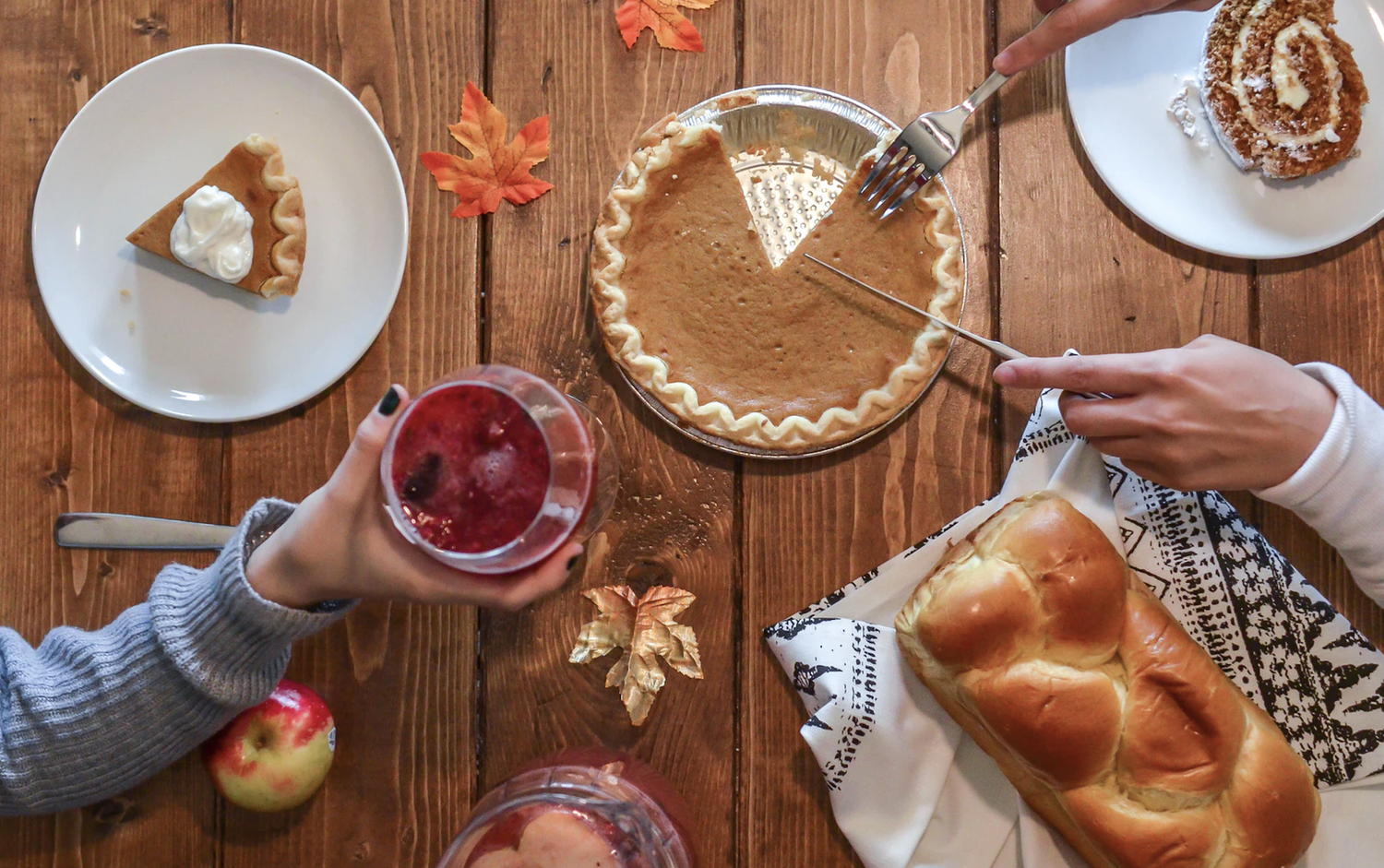 A Thanksgiving table provides the inspiration for this Arts Playlist. By Courtesy of Element5 Digital/Unsplash
By Katia O. Soares dos Santos, Contributing Writer

Synesthesia is a condition where the senses overlap so that they’re nearly indistinguishable from each other. For instance, upon hearing a sound, a person with synesthesia might immediately think of a color. This concept has always fascinated me — particularly because I believe we all experience some innate crossovers between our senses. Indeed, a classic debate online has revolved around what colors people assign to each school subject. (For example, math is red, science is green, and English is purple).

Enter: The connection between sound and taste. Perhaps this is an idea better left in the darkest depths of my Notes app, but in the true holiday spirit, I am charitably sharing it for the world to see. In honor of the recent holiday, here are my interpretations of the sonic identities different Thanksgiving foods might take on.

Turkey: “Here Comes The Sun” By The Beatles

Dare I say that the traditional Thanksgiving staple is overrated? Turkey takes a very known and loved concept — chicken — and miserably fails in imitating it to an almost offensive degree. With inferior flavor, turkey makes you question how eating it each year even became a tradition. (“Does the U.S. government subsidize turkey farms?”, you wonder.) Not to mention that turkey is also dry no matter how you slice it. You may be itching to object and tell me that I just haven’t had a good turkey by someone who knows what they’re doing. I assure you, my grandmother and my mother are fantastic chefs, but even the most moist turkey is dry compared to the driest chicken.

“Here Comes the Sun '' by the Beatles is nice. But I beg the question: Would you like it quite as much if it wasn’t something that you grew up listening to? (Relatedly, would you like it as much if it wasn’t in the “Bee Movie?”) Considering that the Beatles and indeed much of early rock music were derivative of jazz stylings, and that contemporaries like Pink Floyd were taking much bigger artistic leaps, I struggle to understand why the Beatles achieved quite the level of reverence that they have today. In this way, the two classic staples are not all that different.

Now, this is an interesting case. Even though turkey as a whole is a huge disappointment with few redeemable qualities, gravy manages to take the best parts of turkey and turn it into a sauce. Gravy is delicious, so it is hard to imagine that it comes from turkey. It succeeds in all of the ways that turkey fails.

Frank Ocean’s “White Ferrari” samples “Here, There, and Everywhere” by the Beatles. I don’t think that it’s controversial to say that the two are quite different — the main difference being that “White Ferrari” is something I will voluntarily listen to. The existence of gravy is nevertheless dependent on turkey. As reluctant as I am to admit it, without the Beatles, “White Ferrari” wouldn’t exist.

Stuffing: “I’m The One” By DJ Khaled

Of course, stuffing is delicious. It takes only the most popular bits of many dishes and combines them together into one complimentary concoction. Who could say no to the combination of bread, butter, and onions? However, stuffing isn’t doing anything new, provocative, or particularly interesting. What risks does it take by combining everything that people love and leaving out what they don’t?

Exclaiming “we the best music,”DJ Khaled attempted to make the summer blockbuster’s musical equivalent with his 2017 song “I’m the One.” In the song, DJ Khaled totes an impressive lineup of big names (arguably the bread, butter, and onions of 2017 music): Justin Bieber, Quavo, Chance the Rapper, and Lil Wayne. Still, “I’m the One” has a debatable amount of artistic merit. Like stuffing, “I’m the One” is an enjoyable experience. However, because DJ Khaled doesn’t take any meaningful artistic risks in “I’m the One,” its legacy fails to extend beyond Spotify’s “US Summer Hits of the 10s” playlist.

Ye ole’ reliable: a nostalgic dish that can’t help but remind folks of youth and home-cooked meals. With no real texture other than smoothness, even the pickiest of eaters can appreciate the dish as something that agrees with everyone and everything. Sure, it’s not exactly pushing the envelope, but sometimes that's alright. You can’t go wrong with this one.

Science would call “Africa” by Toto the best song ever because of its widespread appeal. Now, this is a bold claim. However, with its strange yet compelling lyrics and upbeat melody, the infamous track is hard to hate and easy to like, much like the Thanksgiving staple in question.

Cranberry sauce is a series of contradictions: Its bold flavor is an immediately recognizable sensation despite its gelatinous and unstructured body. It is tangy and sour, but also has an underlying sweetness that makes one consistently come back for more. It’s bold and provocative, with the potential to instantly transform any dish, as its sourness cuts through fat and gives dimension to the rest of the palette. Some may not like it, and that’s okay. It is a luxury only to be appreciated by the most sophisticated palates.

Certainly “Immaterial” by SOPHIE also packs a bold punch. The song is four minutes of electric hyperpop synthesizing that propels it forward. However, this is all in conjunction with a consistent beat and low reverb that creates a light sonic texture. You may not like it upon initial hearing, but there's an undeniable appeal that keeps you coming back for seconds.

Sweet Potato Casserole with Marshmallows: “All Caps” By Madvillian

A distinctive flavor that people either love or hate, sweet potato with marshmallows plays on the most peculiar balance between sweet and savory, almost as though someone combined whatever leftovers that they had laying around and — by some grace of God — it worked! Something about this dish is also emblematic of childhood. Its sweetness presents an undeniably nostalgic quality, but its unique combination of flavors gives it an air of sophistication.

Opening with a sample from a vintage movie’s soundtrack, “All Caps” by Madvillian takes the aesthetics of nostalgia and throws them out the window. Like marshmallows in a casserole, the track is fun, exciting, and itches the brain in a surprising and unexpected way.

Smooth and sweet with an unexpected crunch, some would say that dessert is the best part of the meal. At the very least, I propose that it is certainly a part of the meal that everyone looks forward to. Apple pie is no exception. It is as American as blue jeans and the Kardashians. “In these divided times, apple pie can help to bring us together,” one can almost hear the president say.

Imagine it: eyes closed, taking a bite of warm apple pie with cool, melting ice cream dripping off the spoon. Almost without exception,“In A Sentimental Mood” by Duke Ellington and John Coltrane is playing in the background of an imaginary scene with this amount of sensuous pleasure. It’s the perfect conclusion to any meal.