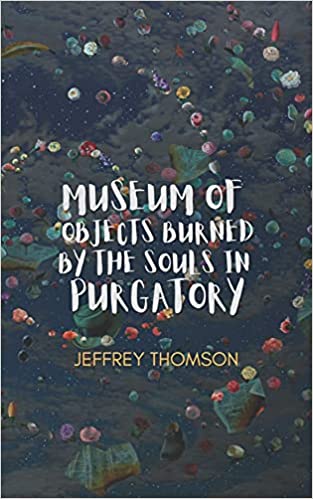 Cover for "Museum of Objects Burned by the Souls in Purgatory" by Poet, Jeffery Thomson. By Courtesy of Alice James Books
By Anya B. Cheng, Contributing Writer

Imagine a museum containing a carbonite statue of Han Solo, the Notre-Dame Cathedral, and a Costa Rican beach. This is the museum that Jeffery Thomson curates in his upcoming poetry collection, titled “Museum of Objects Burned by the Souls in Purgatory” after a small gallery located in Rome of the same name. Mirroring the experience of a physical museum, each poem is dedicated to a piece of art, though he defines “art” loosely — and often finds it in unexpected places. Aptly titled, “purgatory” indicates the subtle theme of half-death that permeates his work, as each piece of art has “died” in some sense. Throughout the collection, Thomson pulls each piece of art out of death and into purgatory, where they can be reimagined, revived, and reconsidered.

Thomson opens his collection with a quest for truth. His epigraph, a quote from “The X-Files” — “The truth is out there.” — is a daring yet effective promise. As the collection begins, the reader quickly learns that Thomson is a man of his word. The truth, certainly, is out there; the book discovers it and reveals it in potent lines and staggering revelations, line by line, poem by poem. In one breathtaking example, Thomson asserts, “We have broken / the world so often / we have the pieces… we do not understand / why they do not / fit back together.” In another poem, he argues, “only / the best can / pretend to / fall for / nothing’s / easier than / failure.” Clearly, Thomson can find truth in the mundane as well as the extraordinary, and revelations like these are commonplace in the book.

Each poem in “Museum of Objects Burned by the Souls in Purgatory” is a meditation on a specific artistic relic — all of them dead, gone, and lost, yet still made piercingly relevant. The collection is an art and culture history lesson, and the reading experience is intimate. Since the poems do not simply describe pieces of art, but also interpret and learn from them, Thomson becomes a personal museum tour guide. After each title, he sets up the poem with a bit of context: the materials used, the location of the art, or quoted material from pop culture that speaks to the work. These precursors are one of the most interesting aspects of the collection, often working with the poem to illuminate the work in a new way; for example, “Transparent crystal, facial sections of a human head, silver plate” is the material list for one of the poems.

Thomson effectively juxtaposes pop culture with historical artwork, using both in tandem to convince the reader of the value of art from all sources. His choices for subject matter are not pretentious. His sternum (“Ode to my Sternum”) deserves a poem just as much as Marco d’Agrate’s statue of Saint Bartholomew (“St. Bartholomew Flayed”), and both deserve to exist in the same collection as lyrics quoted from Tupac. He challenges himself to find truth in each piece of art; he dares the reader to trust him on his quest.

Thomson’s wide variety of cultural references make the collection a fast-paced, head-spinning journey across space and time. For example, he opens his poem entitled “Día de los Muertos'' with the word “Odysseus.” Three lines into a poem that initially appears to be about the Trojan horse, he jolts the reader back to the present day, writing, “The virus began in an animal, perhaps a bat.” In a meditation on a Mexican coral reef, he references “those Chinese soldiers standing / forever buried beneath the earth” (the Terracotta Army, of course). Thomson’s brilliant, complex connections create intellectual whiplash in the best way possible. In contrast to what the title suggests, these poems are not all based on historical work from Rome, nor are they based on art that has since died and been in purgatory. His work is excruciatingly current, even when he draws inspiration from the past.

Even with these striking truths and fascinating subject matter, Thomson’s poetic expertise shines through, using structural variation, shape, and diction to bring the artwork to life. The collection does not stick to one consistent structure; rather, poems blend from one style to the next depending on what the art requires. Thomson also adjusts the shape of his poems to impart further meaning onto the artwork. Fittingly, for the poem “Two Halves of the Skull of John the Baptist,” Thomson splits the poem into two sides that can be read either as one complete poem or as two separate pieces. Thomson’s skillful and precise diction creates vivid imagery and distinctive lines that stick with the reader long after the collection is over. The diction ranges from remarkable and complex (“Obsolete antediluvian”) to punchy, daring, and effective (“what shit what piss / what wind what air”). Thomson takes care to match his stylistic elements to the artwork itself, the two working in unison to find truth in each piece.

“Museum of Objects Burned by the Souls in Purgatory” is Thomson’s resultant depiction of the process of experiencing art. This is where the collection draws its greatest strength. The poet is speaking to the reader directly and, through the artwork, he lets the reader into his own life as well. His poetry is not just about the art in front of him. Through the great martyr Demetrius, he confronts his experience with young gay love; through a myth about stones, he confronts his experience with grief. Art becomes accessible with Thomson’s expert touch, and on his tour through the museum, the reader finds the truth.