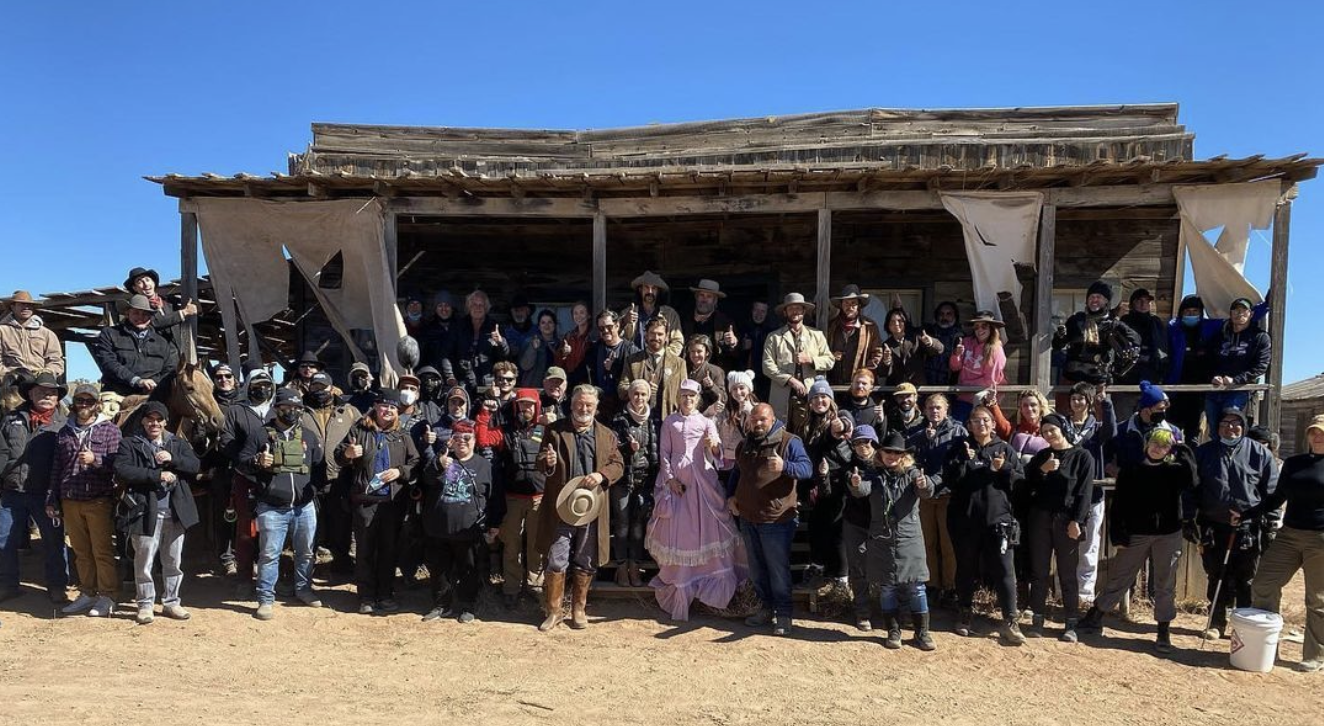 Cinematographer Halyna Hutchins posted this image on her Instagram with the caption “Standing in #IAsolidarity with our @IATSE crew here in New Mexico on RUST.” By Courtesy of Halyna Hutchins @halynahutchins
By Mia E. Taylor, Contributing Writer

On Oct. 21, when Alec Baldwin went into work on the set of his latest film, “Rust,” a day that started out as usual quickly turned into tragedy. While shooting a scene, a prop gun Baldwin was using for a scene mistakenly fired a live bullet, killing the film’s prolific cinematographer Halyna Hutchins and injuring director Joel Souza.

For those not involved in the world of filmmaking, it can be difficult to understand exactly how something like this could have happened. The misguided popular conception of what a “prop gun” is proves a part of that. Rather than a specially designed fake gun or computer rendering, the makers of “Rust,” like many other filmmakers, used real guns loaded with blanks (bullets with no tip) to shoot scenes where a character fires a gun. A designated crew member is supposed to ensure that a gun contains no live rounds before handing it off to an actor; a failure in this step could prove fatal and, in the case of “Rust,” it did. An assistant director picked up one of three prop guns laid out by the film’s armorer and handed it off to Baldwin, who needed it for a scene. Unbeknownst to either of them, the gun actually still contained live rounds.

It goes without saying that what happened on the set of “Rust” is a tragic accident caused by human error, but that doesn’t mean it occurred in a vacuum. Just earlier this month, the International Alliance of Theatrical Stage Employees (IATSE) asked its members to vote on the possibility of a strike against poor working conditions, including overly-long work schedules, unfair pay, and safety hazards. The result? A resounding 98.7 percent of union members responded “yes.”

One of the main reasons the IATSE decided to vote on a strike is the oftentimes hazardous conditions film crews are forced to work in on set. In a recent article from Deadline, it was reported that there were more than 50 reports of 14-hour workdays within the first seven months of 2021. Forcing employees to work for such extended periods of time without sleep is not only inhumane, but also increases the likelihood that mistakes such as what happened on the “Rust” set will occur.

It’s worth noting that some of the support for the IATSE’s potential strike came from employees who worked on the set of “Rust,” including Hutchins herself. In an Instagram post made two days before her death, Hutchins reposted a photo of the “Rust” crew on set with the caption partially reading, “Standing in #IAsolidarity with our @IATSE crew here in New Mexico on RUST.” The post was originally shared by “Rust” actress Frances Fisher.

In light of what happened on “Rust,” what was once an average post now feels especially haunting. But it also highlights a bitter truth about incidents like this one: They’re often the aggregated result of several compounding abuses and disregard for the safety of those who work in filmmaking. Her death isn’t the first of its kind, and unless there’s systemic change within the film industry, it likely won’t be the last. In 1993, Brandon Lee, the son of actor Bruce Lee, was shot and killed by a prop gun on the set of the film “The Crow.” His death was ruled an accident due to negligence and heightened the discussion surrounding safety on film sets as well as the need for protection. Still, not much happened as a result and the conversation surrounding the circumstances that led to his death eventually fizzled out, a fact that is now painfully obvious.

Now, almost three decades later, the world is watching a similar tragedy unfold, and all one can hope is that there’ll be a real change this time. Some workers have already called for the use of only computer-generated gunshots in film as a way to avoid real guns, but others have brought up the difficulty in making the gunfire appear genuine. Such special effects are also a lot more expensive, bringing with them the types of costs that producers are often trying to cut. But if no effort is made to at least improve on the technology used, then the blatant disrespect Hollywood has for those who make it run becomes more pressing. There is absolutely no making up for the loss of human life, but the very least that could be done is to ensure that nothing like what happened on the set of “Rust” will ever happen again. Such efforts at improving the safety of everyone working on a set will not only help guarantee that everyone who goes in the morning to work on a film set can return home to their family that night, but will also ensure that crew members don’t have to come into work and leave traumatized. And if there’s no way to do these kinds of scenes safely, then the question arises about whether they need to be done at all.

Hopefully, things will be different moving forward. Still, it’s admittedly idealistic — very little change has occurred in the years since Lee’s death, and even outside of incidents like what happened on the set of “Rust,” Hollywood has shown its true colors time and time again. One needs to look no further than the #MeToo movement, when Hollywood faced countless accusations of sexual harassment but did little, if anything, to address them. When audiences watch movies on screen, it can be easy to forget all that goes into making them. And oftentimes, what goes on behind the scenes is not entirely pleasant. The movie industry has a long history of using, abusing, and endangering their workers, and what happened on the set of “Rust” is just the latest incident. Only time will tell if positive change will truly be made, but in the meantime, the “Rust” tragedy just serves as confirmation of Hollywood’s pressing need to protect its workers.