No. 1 and No. 2 Harvard Squashes Dartmouth In Women’s and Men’s Showdowns 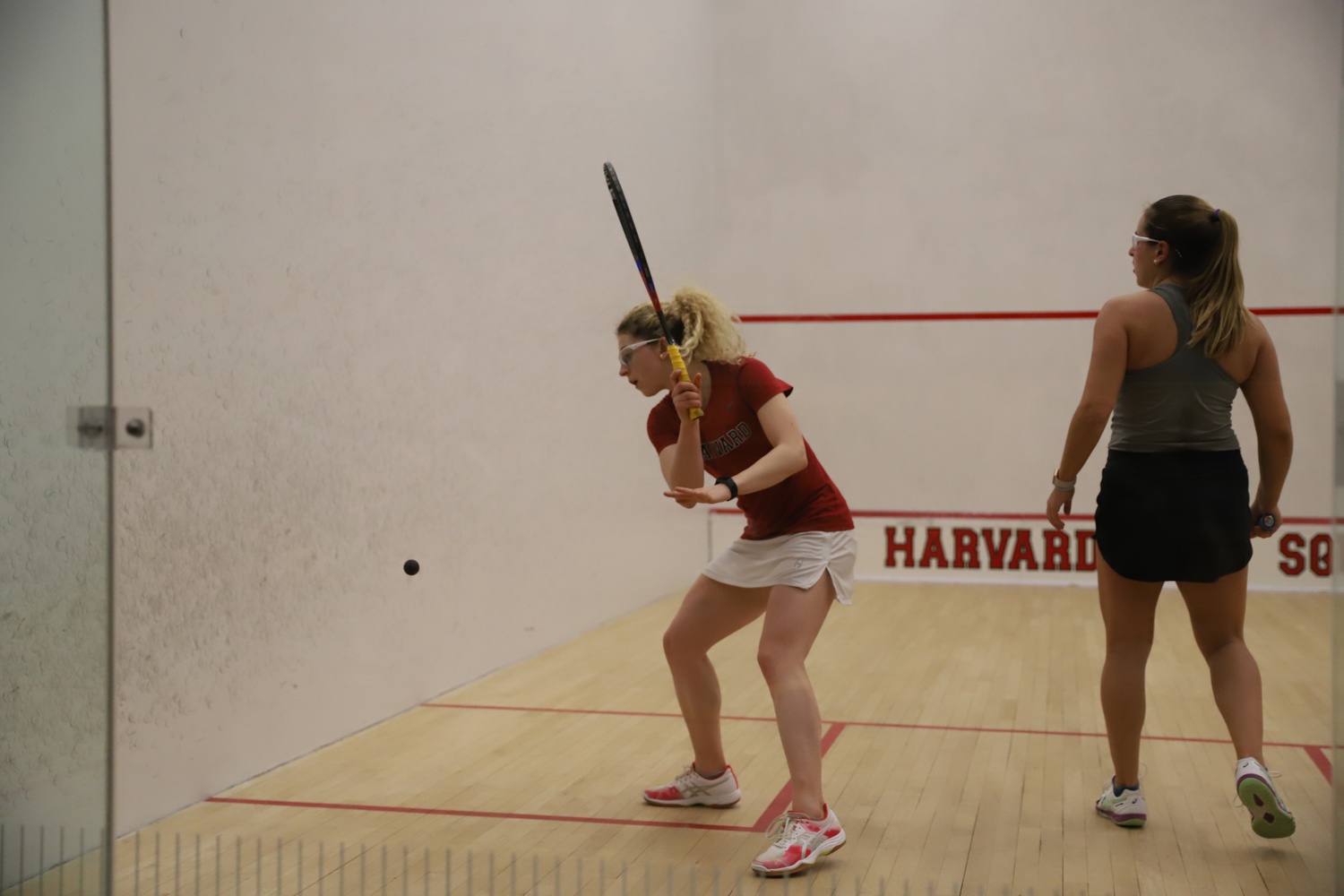 Harvard women's and men's squash are off to undefeated starts in 2021-22 yet again, bringing the winning streaks to 86 in a row for the women and 38 in a row for the men. By Owen A. Berger
By Callum J. Diak, Contributing Writer

The tenacity of the opposing Dartmouth players was nothing to neglect despite the sweep for the men and near sweep for the women. The Crimson was forced to dig deep against a relentless Dartmouth squad, on multiple occasions in game-deciding points.

Tate Harms, a first-year on the men’s squash team, found himself in a very tight spot during his third game of a best-of-five match, finding himself down 6-10 in a race to 11. In such a precarious place, Harms dug deep to make an impressive late-game push, carrying him to a 15-13 win, a crucial moment in ensuring his ultimate 3-1 match victory.

Through all the night’s matches, it was clear that superior mental and physical conditioning in the late game was going to be the deciding factor, and Harms recognized this.

When asked how his strategy changed in the late game, Harms highlighted the importance of forcing his opponent into difficult positions by moving them around the court.

“You never want to be running more than your opponent,” Harms explained. “We say ‘Give them a tour of the four corners [of the court],’ which is what I made sure to do.”

Brecon Welch, a rookie on the women's squad, saw herself in a similar situation, having dropped her first game in the best-of-five showdown. Welch once again highlighted how skill, as well as mental and physical resilience, is important to winning a match.

“Coach is a big proponent of mental toughness,” Welch said. “In between games he’ll ask us to reflect on ourselves, and make us think of what we need to do better.”

Coach Mike Way has been at the helm of the Harvard squash program for 12 years now, leading the Crimson to multiple Ivy League and National titles, and is immensely respected by his student-athletes. Throughout the night, Way could be seen amid the action, cheering on his athletes courtside and offering them valuable words of wisdom.

“He [Coach Way] wants us to get to a point where we are playing our best,” Harms praised.

Welch decidedly identified where her game needed to improve. She proceeded to win the next three games in a tour de force, clinching the fifth overall point for Harvard early in the evening and securing the victory for the Crimson women’s squash team.

The win from both the women and men builds on an already impressive legacy of squash dominance. The women’s victory adds to the Crimson’s impressive 86-match winning streak, while the men acquired their 38th consecutive win.

With such a rich history of success in the Harvard squash program, there are sights on a prize further down the road.

“The team’s ultimate goal is winning nationals,” Welch outlined. But to Welch, the season is about more than a championship. “We really just want to be improving our game as much as we can. Just trying to end the season better than we started.”

Based on their perfect records, both these goals certainly seem achievable.

Women’s and men’s squash will take a hiatus for winter recess, giving players a chance to re-energize. Both Harms and Welch express their eagerness to enjoy a relaxing break. But for the squash teams, the break is just a chance to train even harder without the extra pressures of school as they prepare for an ambitious winter season. The Crimson will come charging into the new year on Jan. 9 as both the women’s and men’s squads will faceoff with the University of Virginia in Charlottesville, Va.