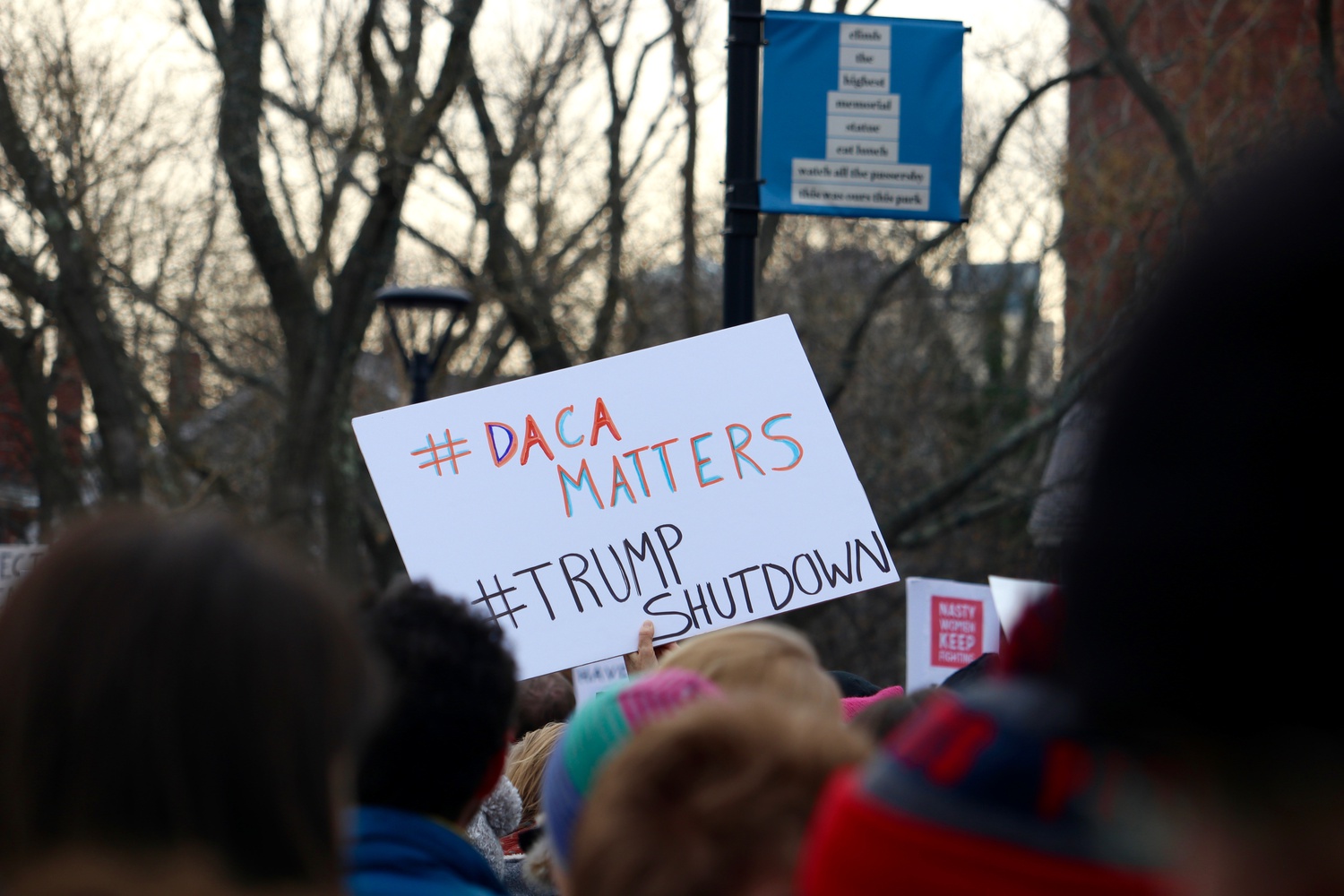 Protestors assemble during the government shutdown in early 2018 that resulted from the Senate's inability to reach an agreement on the Deferred Action for Childhood Arrivals (DACA) program. By Amy Y. Li
By Audrey M. Apollon and Leah J. Teichholtz, Crimson Staff Writers

A non-profit website, run in part by Harvard College students and incubated in the University’s iLab, is pushing forward in its mission to provide free aid to those working through immigration applications.

ImmigrationHelp.org helps users file for naturalization, green cards, work and travel permits, and the Deferred Action for Childhood Arrivals program, simplifying what can be a long and complex process, according to executive director and co-founder Jonathan Petts.

“My dad was an immigrant to the U.S. in the 70s,” Petts said. “The sad thing is that in the last four years, my dad’s dream was basically impossible for most low-income immigrants from Latin America, from Africa, from the Caribbean.”

Some students — like Fernando Urbina ’22 and Lavinia Teodorescu ’22 — chose to continue working at the nonprofit even as the summer came to a close.

Urbina, a director of outreach and a member of the founding team, said he “fell in love with the work” and was inspired to help others as the son of a Mexican immigrant.

“I remember my mom went through a very complicated naturalization process,” Urbina said. “I wanted to be part of a team that helps streamline immigration processes for people so that accessibility could be increased for immigrant communities.”

Teodorescu, an international student who also directs media relations for the group, said she was moved to work for ImmigrationHelp.org last spring after noticing an uptick in immigrants facing legal troubles amid the intensifying pandemic.

“We all needed to be safe, and other people had to worry about ‘Am I safe, just by being in my home?’” Teodorescu said. “That should be a clear response, ‘yes, you’re safe by being in your home,’ but that wasn't the case for many people.”

In the last month alone, more than 500 people have used ImmigrationHelp.org, per Teodorescu.

Requests to help file DACA applications make up most of the site’s traffic, according to Petts. On his first day in office, President Joe Biden signed an executive order to preserve DACA, a policy that protects undocumented youth.

“I never want to count chickens before they've hatched,” he said. “But I'm so optimistic about the prospect of the next four years in creating a permanent path for some of our users to live in the country.”

Near the end of fall semester, Jaya J. Nayar ’24 received an email that ImmigrationHelp.org was seeking a volunteer for winter term. Nayar said she volunteered with ImmigationHelp.org by writing grants to help the nonprofit offer more services such as financial training and job coaches via their website.

Given her father’s immigrant background, Nayar said that ImmigrationHelp.org was an “amazing opportunity” to give back to immigrant populations.

“With Biden in power, he’s easing up immigration restrictions so there’s going to be a flood of people coming in,” Nayar said. “We don’t want to get backlogged, so it’s important that we have organizations that have a wider capacity to help immigrants apply for things.”