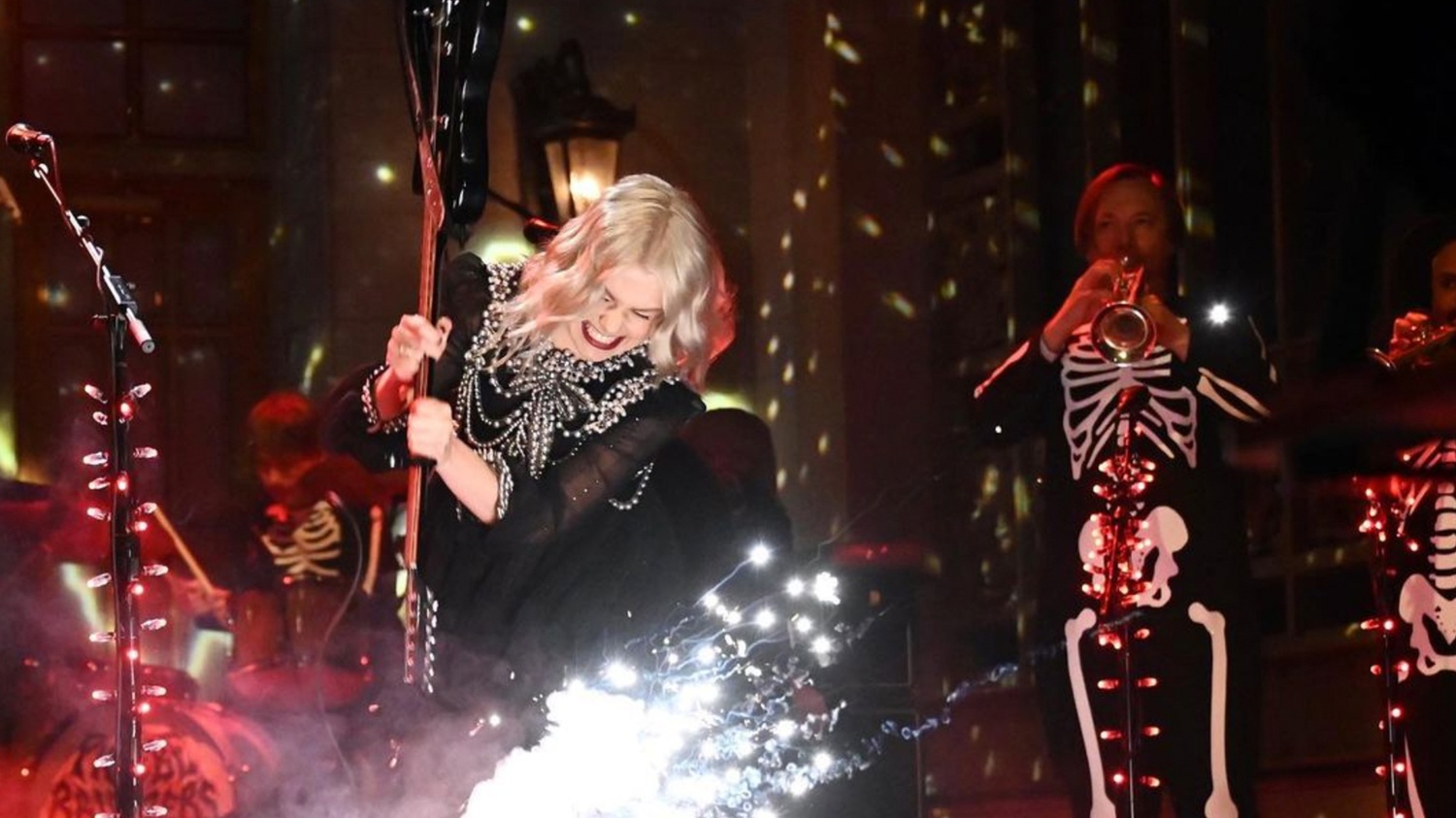 Phoebe Bridgers smashed her guitar at the end of her SNL performance. By Courtesy of Phoebe Bridgers @phoebebridgers
By Hannah Hope Tsai Kim, Contributing Writer

On a Feb. 6 episode of “Saturday Night Live,” host Dan Levy of “Schitt’s Creek” fame invited indie rock artist Phoebe Bridgers to perform the final number off her recent album, “I Know the End.” The camera panned and the lights dimmed, leaving a red spotlight on the singer-songwriter and mirroring the cover of her quadruple Grammy-nominated album, 2020’s “Punisher.”

Earlier that night, she had performed her hit song “Kyoto” from that same album, wearing her iconic skeleton onesie alongside her bandmates. For “I Know the End,” Bridgers was outfitted in a beautiful pearl-embellished ribcage piece. The harness and her platinum blonde hair reflecting the red light created an ethereal setting for what was to become one of the most awesome and memorable SNL musical performances in recent memory.

Two-thirds of the way into the performance, Bridgers and fellow musician Harrison Whitford, both on guitar, synced into an electric duet, marking the song's evolution into mesmerizing chaos. Bridgers then screamed into the mic, the audience cheering and trumpets blaring, and in proper grand finale fashion, smashed a Danelectro guitar into a fake sound monitor. Every moment of the song had been building up to this point, upon which expectations were blown into sparks, quite literally. Ultimately, it was not the guitar or sparking monitor that caught fire, but the internet.

Bridgers, 26, is a Los Angeles born-and-raised artist who made her first major mark upon the release of her first studio album, 2017’s “Stranger in the Alps.” Her sophomore album “Punisher” once again proved Bridgers’ sheer talent and artistry. Bridgers’ songs are captivating and raw, exploring trauma in ways one might be too hesitant to explore on their own. In a recent interview with MTV news correspondent Dometi Pongo, Bridgers said, “I feel like if I didn’t write about personal stuff, I would be robbing myself of the experience of talking with fans with mirrored experiences.”

Bridgers’ performance on SNL was breathtaking, even past both visual and sonic levels, yet another example of how her music addresses such complex truths of life, and how effortlessly Bridgers elicits an emotional response from her audience. Still, some viewers did not see her performance this way.

One viewer stoked a fire on Twitter after writing “Why did this woman, Phoebe Bridgers, destroy her guitar on SNL? I mean, I didn't care much for the song either, but that seemed extra.”

However, it was David Crosby, co-founder of The Byrds and one third of the folk trio Crosby, Stills & Nash, who injected the most visible criticism of Bridgers’ performance. When asked by a fan on Twitter what he thought of her guitar smashing, he wrote “Pathetic,” to which Bridgers simply responded “little bitch.”

Many supporters came to Bridgers’ defense, poking fun at the unnecessary controversy and echoing Bridgers’ own witty and blunt internet presence. Founder of the Foo Fighters and former Nirvana drummer David Grohl offered his support of Bridgers, saying that his days in Nirvana were filled with drums with holes in them: “It was every fucking night,” he said on “The Howard Stern Show,” On Instagram, Bridgers said “got some really great feedback from my performance ! next time I’ll just burn it and it will be more expensive.”

Although Crosby later explained that he condemns all guitar smashing, this “controversy” calls attention to the double standard for women-identifying artists. Was Crosby actually concerned with the preservation of guitars, as they are “for making music… not stupidly bashing them on a fake monitor for childish stage drama,” or was he disturbed by a female rock artist joining in on the fun and subverting expectations, as others have claimed?

There is clearly a double standard for women to perform neatly and at the service and comfort of men — that much is obvious. But, the criticism Bridgers received for doing a popular rock show tactic also comes to show how society infantilizes and restricts the artistic freedom of women.

Rock and roll is a genre often defined by the aesthetic of excess, of high volumes and high times. If rock and roll had a rule, it would likely be that there are no rules. Clearly, the internet’s criticism of Bridgers’ performance goes beyond a worry for wasted materials like a guitar and a useless sound monitor, but from covert misogyny and infantilization, seeing women as objects to control and groom. In the music industry, women are treated as lacking some sort of knowledge that male artists inherently possess.

Was Bridgers really being immature or was she displaying her genius? It might be easy to write Bridgers’ music off as too sad and cynical, but what comes with her diligent crafting of every lyric, chord progression, and song composition is an intricate view into the human condition.

In her performance of “I Know the End,” Bridgers invites us into the liminal space of a post-death, non-reality state (see: ghost costumes, skeleton motifs, and her description of her music as “silly death”). The guitar smashing represents a subsequent return back to the visceral sadness of life’s realities in a raging outcry. This duality is best illustrated by the tender hug Bridgers shared with her bassist, Emily Retsas, seconds after Bridgers’ intense guitar smash. Maybe there is no line between dreams and reality, between life and death, between love and loss. With this dissection, it is hard to name even a few artists willing to explore these harrowing truisms like Bridgers seems to do so naturally — that our existence is inevitably painful and angry and joyful and beautiful.

And thus, the controversy over a smashed guitar comes to die. As abstract artist Ad Reinhart put it in his book “Art as Art,” “art is art-as-art and everything else is everything else… art is not what art is not.” If so, may art be imagined, created, and consumed in spaces of freedom and resistance, not in spaces of comfort for old men. And as she should, Bridgers’ had the last word on this matter, writing on Twitter, “I can’t believe I am the first woman ever.”