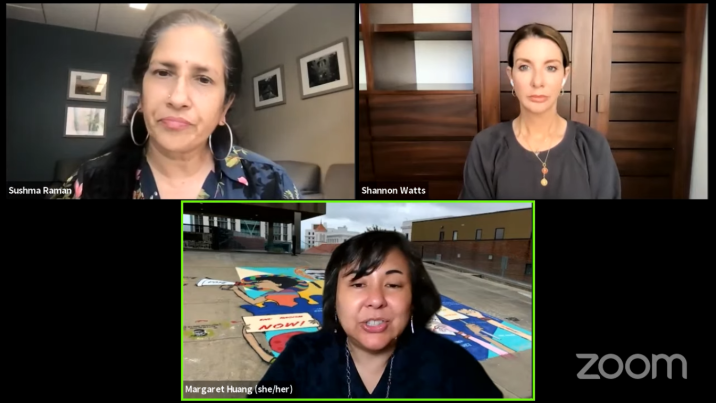 A Wednesday panel hosted by the Kennedy School explored how an increase in anti-Asian sentiment during the coronavirus pandemic has led to violence against Asian Americans. By Simon J. Levien
By Simon J. Levien, Crimson Staff Writer

The mass shooting, which took place on March 16, targeted three spas and left eight dead— six of whom were Asian women.

Moderated by Sushma Raman, Executive Director of the HKS Carr Center for Human Rights Policy, the panel explored how the uptick in anti-Asian sentiment amid the Covid-19 pandemic created an environment conducive to openly committing acts of violence against Asian Americans.

Huang shared data published by the reporting center Stop AAPI Hate that found nearly 4,000 incidents of hate crimes against Asian Americans since the beginning of the pandemic.

She expressed disappointment that law enforcement has yet to classify the Atlanta shooting as a hate crime and added that the SPLC will push for more thorough documentation of hate crimes.

“Sadly, we have seen a lot of hesitation in the shootings in Atlanta, but we will continue to push for stronger hate crimes documentation across the country, because it affects so many different communities,” Huang said.

Watts, who founded Moms Demand Action for Gun Sense in America, discussed how gun violence against women — especially women of color — could be tempered by more stringent federal regulation of gun laws.

“Strengthening our gun laws at the state and federal levels, like passing background checks. reauthorizing the Violence Against Women Act — those things go a long way toward protecting women right now,” Watts said.

She added that the recent shooting in Atlanta and Monday’s shooting in Boulder, Colo. are a “deadly outcome” of “allowing gun lobbyists to write our gun laws.”

Huang gave a brief history of anti-Asian racism in the United States from the 19th century to the present. She said stereotypes of Asian women as “docile or servile,” particularly in regard to sex work, contribute to a “patriarchial violence narrative.”

“If you look at any of the other examples of some of these terrible mass shootings, it is not hard to find misogyny and violence against women in nearly all of them,” Huang said.

“Last week in Georgia, the victims were mostly AAPI women, a community that has long faced the triple threat of misogyny, racism, gun violence,” Watts said. “In the last year, this threat has just continued to grow.”

To make headway on progress, Watts said gun control advocates should speak out against the “vocal minority” who largely influence gun policy.

“When we talk about how do we change hearts and minds, it’s really getting what has been a silent majority, to be a vocal majority, so that they have more power and control than this — what has been for so long — a vocal minority that has held sway over so many of our laws, including gun laws,” she said.