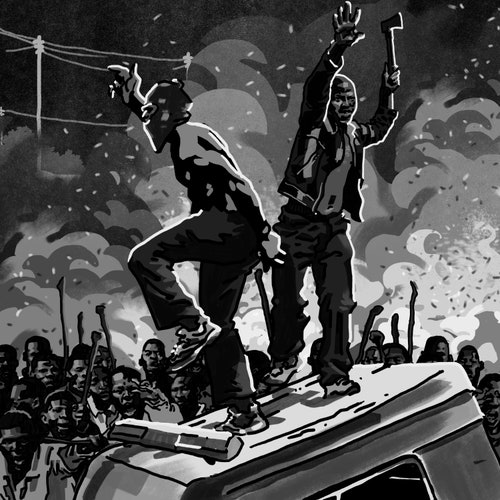 Cover of "Rainforest" by Noname By Courtesy of Noname
By Caleb K.P. Gordon, Contributing Opinion Writer

If you can imagine a Malcolm X speech with the energy of Soul Bossa Nova, you can imagine “Rainforest.” A stunning hit by Twitter’s favorite scholar, Noname's “Rainforest” is a powerful exercise in dichotomy: The artist perfectly weaves together her signature bubblegum trap musicality, soft delivery, and cutting lyrics to develop an intimately complex and exciting piece of art.

If you were to take out Noname’s words and guess the context of this song, you would maybe place it in the soundtrack of an inspirational movie about a double dutch team or the theme song for one of Disney’s slightly more diverse originals. If you were to look at the lyrics in isolation, you would think you stumbled on some lesser-known spoken word pieces from Bernie Sanders in the ‘60s. You would not expect these two to mesh. But rap as a genre has a long history of hiding painful, dramatic, and political lyrics in an otherwise upbeat song — and Noname is a master of this form.

Her debut mixtape, “Telefone” was full of this. In “All I Need,” Noname raps about drugs and alcohol over a beat that sounds like it came from “Steven Universe.” “Casket Pretty” — a song about gun violence and police brutality — is underscored by a dub of a baby laughing. Noname took her lyrics to a new level of seriousness in her freshman album, “Room 25.” In it, Noname more boldly tackled the topics of her previous work but also attempted to match the topics with the sound, allowing minor chords and melancholic synth. In doing so, Noname also lost the playful energy the world had fallen in love with on “Telefone,” and the work was weaker because of it.

With “Rainforest,” Noname has found the best of both worlds. This is her most overtly political work, yet she maintains that distinct playground energy she developed in her mixtape. This may be because the Noname of today has so much more history to explore than the Noname of her past work. Since “Telefone,” Noname has become visibly socialist, started a national book club for reading radical Black texts, fought with the Beyhive for comments about Beyonce and Jay-z’s capitalism, and refused to perform for primarily white audiences. When J. Cole tried to tone police her, she called him illiterate in response on “Song 33” (although she would later express regret for the diss track).

“Rainforest” embraces this history. Lyrics like, “How you make excuses for billionaires, you broke on the bus?” echo her prominent and public critiques of billionaire defenders. The song features lines referencing the “Wretched of the Earth” — a radical anti-colonial text from the ‘60s written by Frantz Fanon — lines critiquing American imperialism, and lines about ecological injustice and international anti-Blackness. This is built on an upbeat loosely Ska and Samba-influenced, jazz-rap musical foundation. “Rainforest” is simultaneously a song to smoke with your friends to, a song to slow dance to, and a song to theorize to. In a very Illuminati-reverse-the-track type fashion, Noname invites the listener to take what they want from the piece, while she passes on her subliminal messages of radicalization.