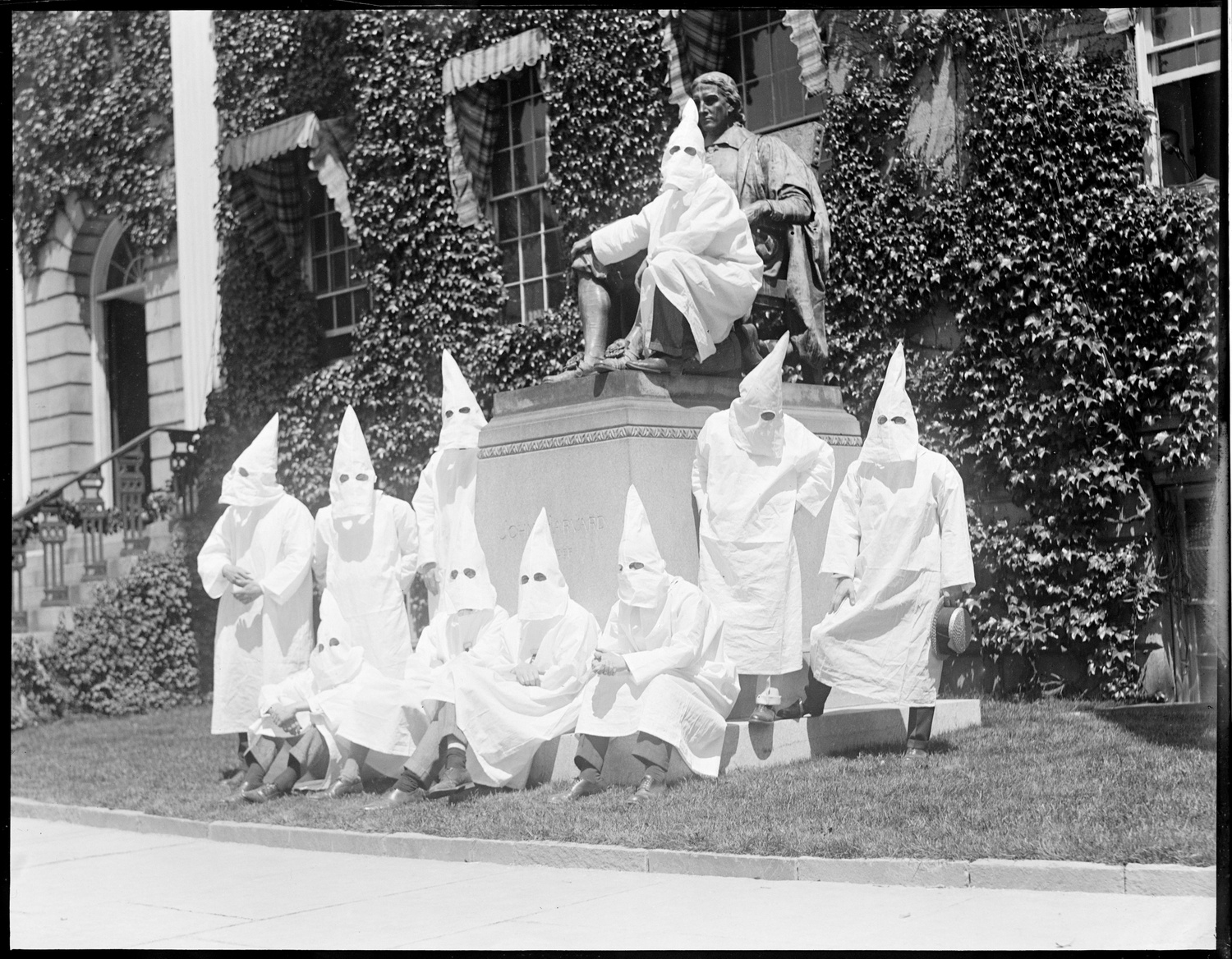 You’ve seen the image by now (if not, scroll up). Members of the Harvard branch of the Ku Klux Klan pose, in full regalia, for a 1924 graduation photo huddled around our campus’s most renowned landmark: the John Harvard Statue. Slacks and dress shoes poke out from their robes. One Harvard Klansman cheekily straddles John Harvard and turns his head to the camera. The group looks defiantly calm — almost as if they’d already guessed our University’s then lax stance towards their ideology.

The pictured students were, per a recent deep dive into the KKK’s Harvard’s ties by Crimson staff writer Simon J. Levien ’23-24, only one testament to the white supremacist group’s pervasive presence on our campus throughout the 20th century.

In the 1950s, freshmen carried out a cross burning in the corner of Harvard Yard where the handful of Black students in Harvard’s freshman class primarily lived. In the ’20s, Harvard Klansmen ran a “klanidate” to oppose Cambridge’s mayor, who disparaged and threatened to disband Harvard’s chapter. Through the ’90s, incidents speaking to the Klan’s continued influence, such as the appearance of KKK leaflets, graffiti, and propaganda on campus, persisted. Harvard’s administration, to the present, largely remained silent.

Despite the Klan’s tendency to operate in “considerable secrecy,” a robust archival record of its presence and dynamics exists (to the curious: try searching The Crimson’s website). So why did it take decades and significant personal effort on behalf of a student to illuminate our bleak past?

We commend our fellow Crimson staffer for helping unearth one of our University’s darkest and most startlingly unexcavated chapters. His work, like that of other college journalists before him, highlights the potential of student journalism as a source of accountability separate from our institutions, through which students may unveil important yet deeply inconvenient truths.

The history Levien has dutifully brought forth is painful; the image itself, jarring and the work altogether urgent. Yet we can’t help but regret that the story didn’t come earlier and from Harvard itself, full account and apology hand in hand.

Levien’s research into the Crimson Klan represents exactly the kind of tale that needs to be told if we are to genuinely and accurately reckon with our institution’s past. That the KKK did not come up in existing institutional attempts at historical reckoning reveals flaws in Harvard’s current efforts to reexamine its old self.

Back in 2019, University President Lawrence S. Bacow announced the creation of the $5 million Initiative on Harvard and the Legacy of Slavery to, in his words “help the university gain important insights about our past and the enduring legacy of slavery.” The program, however, rarely delves into the 20th century, focusing on our earlier, more temporally distant ties to slavery and racism rather than our palpably shameful recent past. It appears that no one involved in the initiative knew of Harvard’s Klu Klux Klan chronicles or thought to investigate the topic.

Yet what is the legacy of slavery — of the founding of the United States upon the pillars of white supremacy and the absolute exploitation of Black people — if not virulent racism, which the KKK so brazenly and uniformly represents? Investigating slavery’s legacy necessarily includes examining the dynamics and abuses, modern and past, that follow from such a premise. It is then alarming that it fell upon a student journalist to unearth Harvard’s relationship with the Klan rather than Harvard’s multi-million dollar Legacy of Slavery initiative, funded expressly to investigate its namesake. If the initiative does not consider studying Harvard’s literal Klu Klux Klan chapter under its purview, what exactly is?

The short-sighted and, at worst, purposefully evasive approach to investigating Harvard’s relationship with slavery and its legacy (racism) leaves us wondering whether the initiative’s aim is constructive engagement with the past — understanding pain caused and wrongs in need of righting — or mere historical navel-gazing.

Far too often, the burden of “unearthing” these past examples of white supremacy has fallen on the backs of Black people, as the victims of bigotry become the main and often only chroniclers of their victimization. And so it was through the words of J. Max Bond Jr. ’55, a Black student who was forced to witness a cross burning outside his dorm, that we learned of its existence following Levien’s publicizing of his account. If the Legacy of Slavery initiative is to succeed, the University has a responsibility to offer alternative epistemological paths forward: ones that protect students from having to constantly retell and relive their painful experiences for the sake of combating white supremacy and the historical record.

The creation of a 20th-century subcommittee within the initiative is thus long overdue — as is an analysis of how former racially exclusionary practices might still shape campus dynamics. The latter might prove surprisingly insightful: Levien’s own article revealed, for example, that presenting discrimination as something funny (the Lampoon’s crass 2019 joke about Anne Frank comes to mind) is a campus trend and rather than a new campus phenomenon: Harvard’s 1952 cross burning was written off as a “prank” by administrators at the time.

It is worth remembering that some 1920s Harvard Klansmen thought having a collegiate chapter at the “100 percent American” Harvard was redundant — the quoted phrase equating Americanness with whiteness, and a Waspy slice of it at that. In other words: KKK members thought that, through upholding white supremacist and exclusionary admissions practices, Harvard was already Klan-like enough for them. In considering “our present” through the Legacy of Slavery initiative, as Bacow laid out the initiative would, Harvard must think deeply and perhaps unconventionally about how commonly accepted modern higher education practices may stand to lengthen slavery’s ugly shadow, as whites-only college admissions did then.

Crucially, inspecting our recent history might help disprove some of the most common, reductive myths about American racism. The fact that Harvard undergraduates attended bi-monthly Klan meetings speaks to how racial bigotry isn’t always a product of pitiable, teachable ignorance or geographically confined to some imagined “hillbilly” South. More work must still be done to dispel the false idea that the North is automatically anti-racist or an idealized foil to Southern slavery; Harvard, through a thorough examination of its flawed racial record, could lead the way.

Our university’s history is more than top-notch research, billionaire dropouts, and obscenely wealthy donors. The terror endured by Black students at Harvard — the scars jeering from Harvard Klansmen and the cross burning made — shouldn’t be forgotten. Its inclusion within our broader historical record might be embarrassing or disturbing, and rightly so. But it will also offer a fuller, more truthful account of what campus was truly like; one that allows students to place themselves within a nuanced and expansive continuum. A true history of our complex past — including the good, the bad, and the depressingly ugly — urgently needs writing.