‘It Really Boosts Your Morale’: Harvard Experiments With In-Person Instruction

As Harvard prepares for a full return to campus for students this fall, the College is experimenting with in-person and hybrid courses to develop best practices for in-person teaching and learning.
By Meera S. Nair and Andy Z. Wang 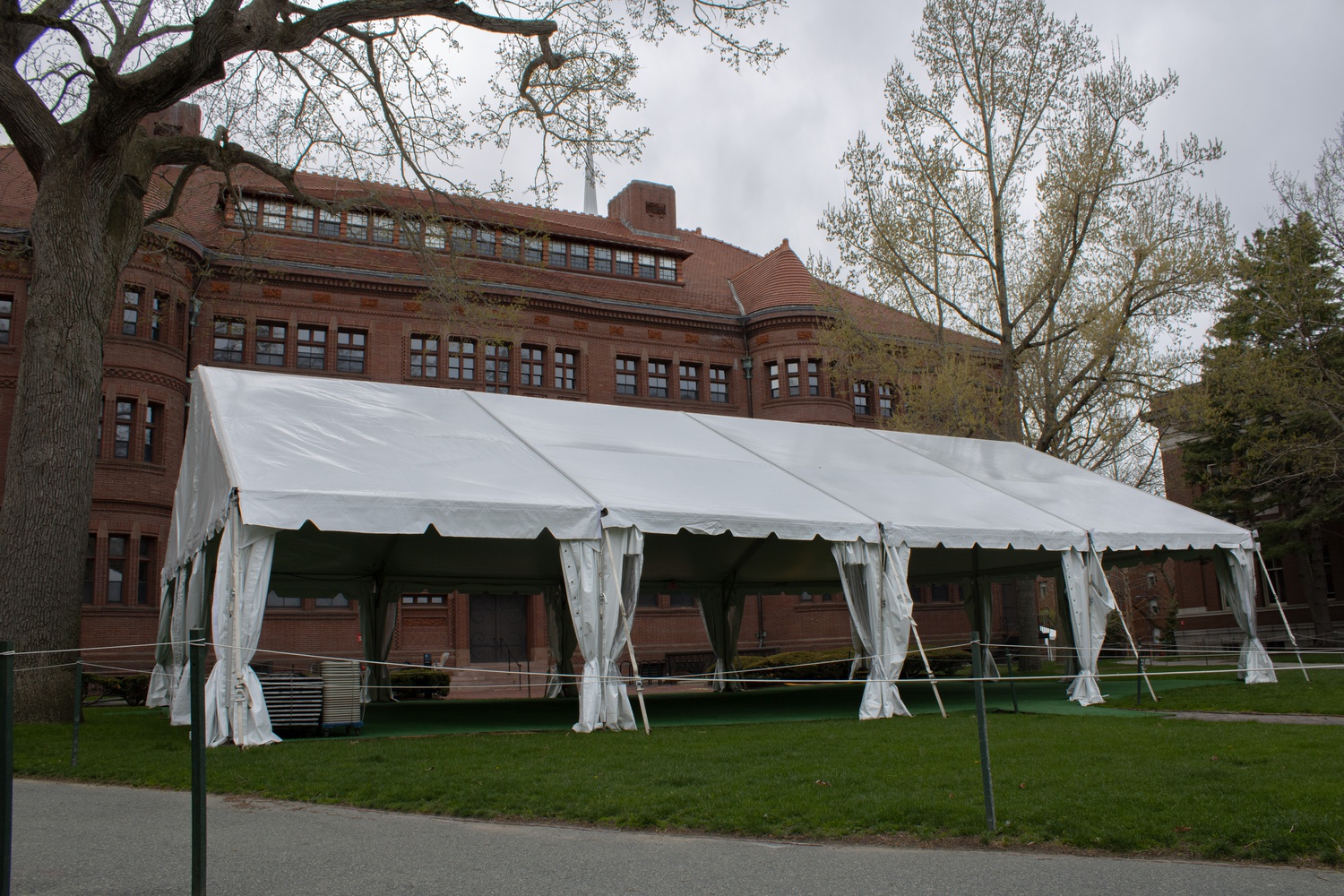 The College is experimenting with in-person and hybrid courses to develop best practices for in-person teaching and learning, with some classes being held in a tent behind Sever Hall. By Angela Dela Cruz

As Harvard prepares for a full return to campus for students this fall, the College is experimenting with in-person and hybrid courses to develop best practices for in-person teaching and learning.

Dean of the Faculty of Arts and Sciences Claudine Gay first announced the trials in a December 2020 faculty meeting, noting that they would help the FAS “work through the logistics” of offering in-person instruction in the fall.

Rebecca N. Nesson, associate dean of the Harvard College curriculum, said in an interview that the College’s pilot program has two components: “full in-person teaching and learning with distancing and masks” and “hybrid teaching,” with students both physically and digitally present.

Nesson said 14 courses are participating in the trial, with a specific focus on classes especially disrupted by Covid safety protocols, including vocal music and lab-based science offerings.

“We really focused on doing a small and targeted pilot, where the intention was to make sure that we tested out the modes of teaching and learning that we felt were most impacted by moving online or would be most different,” Nesson said.

Smail — who was stationed with the “roomies” — said he had to become familiar with Harvard’s HELIX technology, which allows online students to join a live classroom through large monitors.

“The students in the classroom were really good sports,” Smail said. “I remember on a couple occasions, they said, ‘If I want to talk to my classmates, where do I look?’ So we pointed out the camera.”

However, Ryan K. Low, a teaching fellow for the course, said he found leading a hybrid section “very, very challenging.”

“When they're all sitting in an amphitheater, and some of them are on a TV screen in the back of the room and watching what's going on from Zoom, that's really difficult for the TF who's running the section,” Low said.

Reshma Menon, a mathematics preceptor in Math Mb: “Introduction to Functions and Calculus II,” said although she was initially “a little bit nervous going into the first day of teaching in-person,” typical classroom dynamics came back naturally to her and her students.

“When I was in the actual in-person class, my students were much more willing to take risks or think out loud,” Menon said. “In a breakout room, students may be thinking out loud, but I can't really hear that.”

Menon said many of her students demonstrated enthusiasm for the in-person pilot, including one member of the section who recounted feeling “like a kid who's going to the first day of school.”

“I could see my students actually laughing and joking with each other when they wouldn't understand a problem or when they had made a mistake that they realized was a common error,” Menon said.

Kira G. Fagerstrom ’24, a student in Menon’s section, said she had “never done an in-person class as a freshman” at Harvard and was “super excited” to sign up for the in-person pilot.

“They kept the structure of a problem-solving-based class, but for our breakout rooms, we were actually like there with each other,” Fagerstrom said.

Sebastian L. Garcia ’24, who participated in an in-person section of Human 10b: “A Humanities Colloquium: From James Joyce to Homer,” said he was “really surprised” about how being physically present in the classroom “boosts your morale.”

“I know for a lot of us, it's been a year and a half since we've been in the classroom. So it's really surprising just how easy it is to get back in there and actually start talking and have a good learning experience,” he said. “It made me more excited to learn.”

Smail, the instructor for Gened 1044, said that it was “great” to meet his students in person for the first time.

“It's the two dimension to three dimension. I don't just mean the screen — I mean that you just start seeing them as people,” Smail said.

Michael Yin ’22, a student in English CKR: “Introduction to Playwriting,” said his classmates — many of whom are first-years — were “blown away” by having an in-person section.

“I certainly was nostalgic as well. It’s been so long,” Yin said. “This does give me hope that even if things aren't totally back to normal, even if we had to have some classes in this tent, I honestly wouldn't mind.”

Jasmine N. Adams ’24, another student in Menon’s Math Mb section, said her in-person section was a “subtle reminder” of the full college experience she hopes to have in the fall.

“I walked out of class almost in shock because it was just such a huge difference from online classes,” Adams said. “I've kind of forgotten how it felt to be in an actual classroom.”

Samyra C. Miller ’21, who participated in an in-person trial for TDM 119: “Vocal Production for the Stage,” said the University will have to exercise “creativity” to ensure spaces safely accommodate the arts as it prepares for a full return to campus next semester.

“They should really heavily consider how they're going to rework classes and also extracurriculars that involve the arts, like dancing, singing, acting, because those are also very important parts of the University,” Miller said.

Nesson said that she expects students to “regain appreciation and gratitude” for the classroom experience when they return to campus in the fall.

“It's going to be both very positive and a little bit overwhelming,” she said.