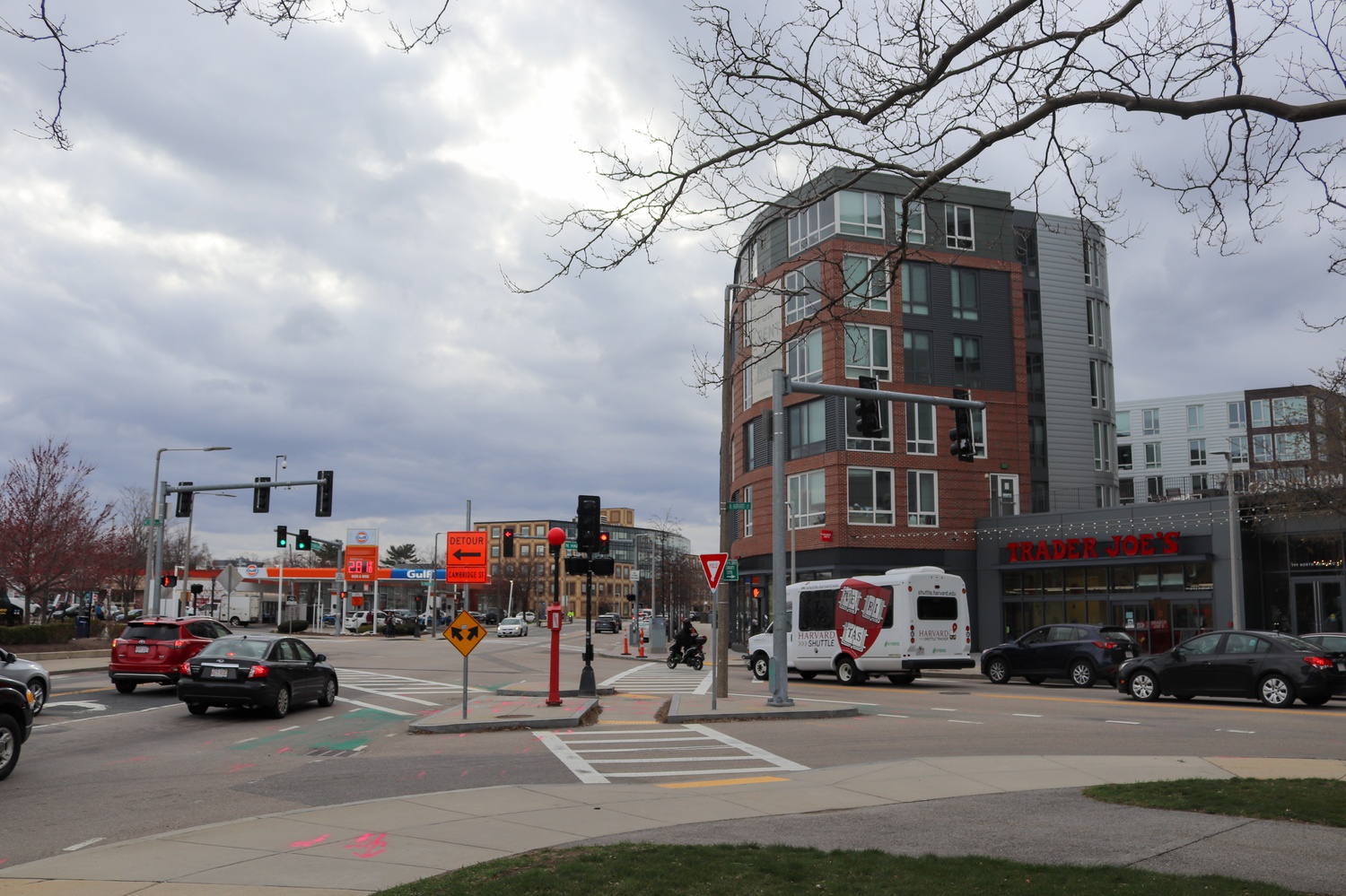 During a public meeting of the Harvard-Allston Task Force Tuesday, some residents questioned the developers of 180 Western Ave. on how they would mitigate complaints that arose during the contruction of 2014 Continuum development — seen above, right — in Barry's Corner, which was led by the same firm. By Santiago A. Saldivar
By Maribel Cervantes and James R. Jolin, Crimson Staff Writers

In their fourth virtual meeting with the Harvard-Allston Task Force Tuesday, the developers of 180 Western Ave. shared updated plans for mitigating construction and fostering public spaces. Some task force members and locals, however, remain worried about the impact that construction at Barry’s Corner might have.

The development — which will be constructed on Harvard-owned land — began formal public review in July 2020, when the developer, Samuels and Associates, filed their Letter of Intent with the Boston Planning and Development Agency.

Since then, the developers have solicited feedback from the Harvard-Allston Task Force, which is serving as the development’s impact advisory group, and filed an additional planning notification form March 5, detailing further plans for the development.

The latest meeting comes three days before the BDPA’s April 30 deadline for the public to submit comments on the development’s planning notification form.

The information from the task force meetings and feedback from other city agencies will eventually be compiled by BPDA into a “scoping determination,” which will present the developers with suggested next steps before seeking BPDA board approval.

Samuels and Associates Vice President of Development Julia Wynyard presented a brief update on plans for the development’s public spaces and bike safety.

Wynyard said they will seek to include both, rather than just one, of their previous plans for open space — a wider sidewalk and additional trees near North Harvard Street, and an outdoor seating area along Bertram Street.

She also added the developers intend to create a “raised cycle track” and repaint parts of North Harvard Street to “accommodate a dedicated, striped bike lane.”

Following Wynyard, the majority of the meeting focused on construction mitigation, including a presentation from the development’s construction consulting firm, CSL. CSL Consulting Principal Edward G. LeFlore elaborated on the efforts to mitigate potential disruptions and damage caused by 180 Western Ave.’s construction.

He said the developers are committed to establishing a number of lines of communication — including a telephone hotline, dedicated email address, and flyers for residents without technology access — to ensure consistent contact with local residents who will be impacted once construction begins.

He also outlined CSL’s “rodent control plan,” which aims to address what he indicated has been a long-standing problem in Allston. The plans, per LeFlore, will begin with in-depth analysis of the current rodent situation to establish a “baseline” and prevent a “mass exodus” of rodents once construction workers break ground.

LeFlore acknowledged that plans for the development are likely to change after the developers hire a construction manager, and as they try to meet the needs of residents in real time.

“It’s really about having a transparent process about how we’re going to move forward,” he said. “Even before there’s a shovel in the ground, or even before anything’s demolished, everyone in the neighborhood will understand what the current condition is — and then between all of us, we’ll determine if our approach is the right approach or if something else needs to happen.”

Harvard-Allston Task Force member Cindy Marchando questioned whether Samuels and Associates should proceed with development, referencing the firm’s 2014 Continuum development in Barry’s Corner, which garnered criticism from Allston residents who claimed their homes were damaged during construction.

Marchando asked how the developers can move forward with their support “when they’re not doing what they need to do.” She also alleged construction workers had damaged her home and said she hoped the developers would “take responsibility.”

Wynyard said Samuels and Associates “made every effort at the time to understand what was going on and to communicate with the neighborhood” about the issues that arose.

Brighton resident Eva Webster expressed disapproval with the development’s design, referring back to Continuum, which she believed was “one of the least attractive buildings.”

“I am sick and tired of missing the opportunity to beautify our neighborhood with new construction by design that’s too arrogant and and not really respecting our character,” Webster said.

Emily Papella — vice president of Elkus Manfredi Architects, the firm in charge of the development’s architecture — said she appreciated the comment and recognized the need to “pay a lot of attention to the design” of the building.

Harvard-Allston Task Force member Tim McHale thanked Webster for introducing the subject of architecture and said he is also looking for a “masterpiece” of a building with “an amazing public realm.”