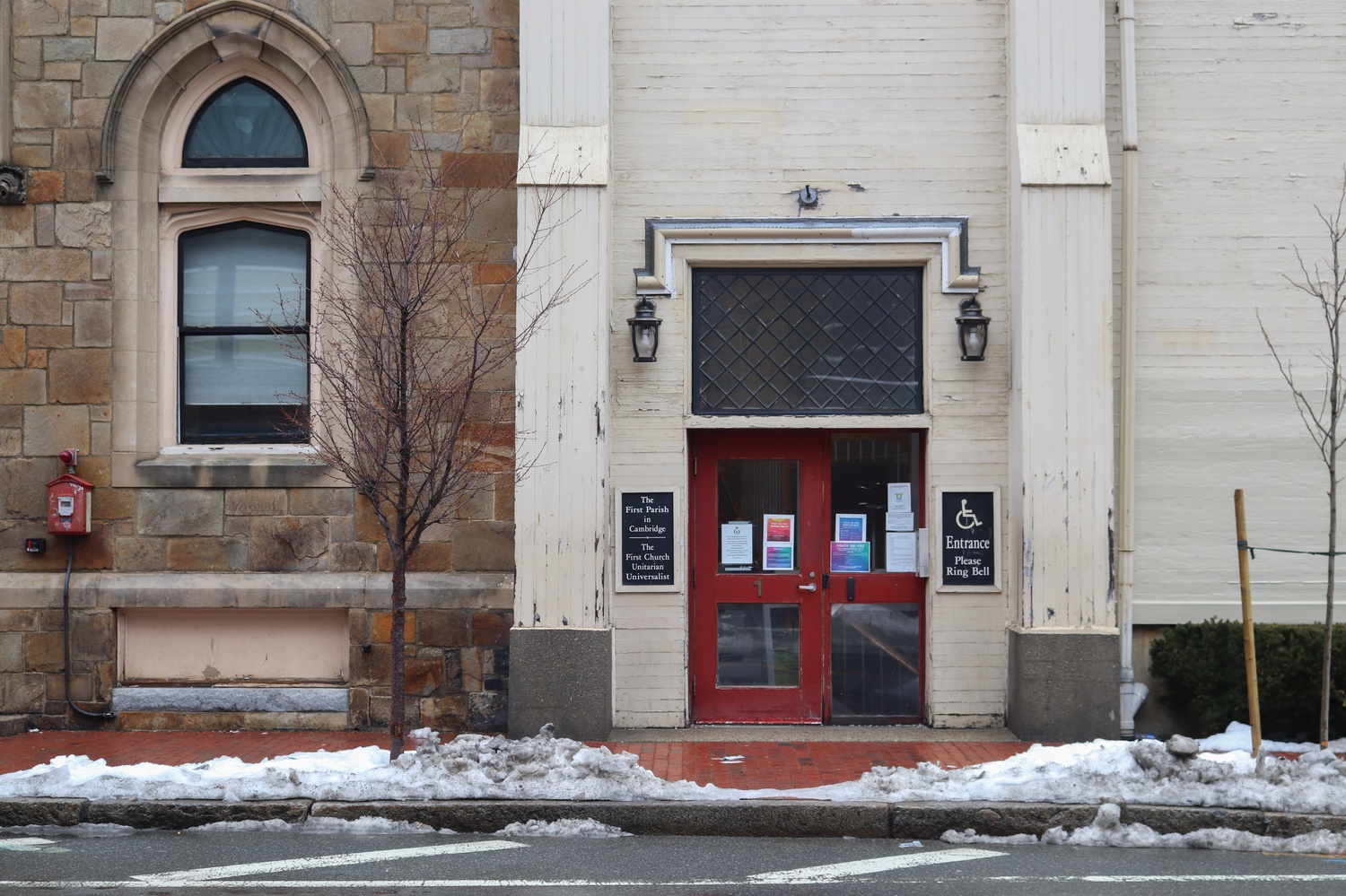 The Y2Y shelter — pictured in February — operates out of the First Parish Unitarian Universalist Church in Harvard Square. By Santiago A. Saldivar
By Raquel Coronell Uribe, Crimson Staff Writer

Y2Y Harvard Square, a youth homeless shelter staffed by Harvard students, has continued to accommodate guests under modified protocols this semester despite the ongoing Covid-19 pandemic, while also recruiting volunteers online and facilitating vaccine distribution for guests and staff.

Cecilia R. “CC” D’Arms ’21, a staff director at Y2Y, wrote in an email that operating the shelter during a pandemic has been challenging, though she added not much has changed since the fall semester. D’Arms said among the issues the shelter has faced are reduced guest capacity and restrictions on students allowed to staff the shelter, measures implemented last year as a Covid-19 precaution.

“Working at Y2Y during a pandemic has definitely been hard—it has not felt like as much of a student staff community, and we are serving fewer guests so the space is less vibrant,” D’Arms wrote.

E. Shea Hausman ’22, another Y2Y staff director, said in an interview that students who are currently able to staff Y2Y must be living off-campus.

“Y2Y is sort of considered an in-person activity,” Hausman said. “Due to the high Covid risk nature of the work, folks who are living on campus are not able to [work a] shift.”

Additionally, Y2Y has struggled to recruit first-year students who did not get a chance to participate as Y2Y volunteers before the pandemic, according to Hausman.

“So the majority of [staffers] are upperclassmen, just because we haven’t been able to recruit new people to work in person since freshmen were in dorms and folks who were in dorms couldn’t shift with us,” Hausman said.

She said, however, that the shelter has instituted online programming to engage first-years and other students living in University housing.

“We’ve been able to engage some underclassmen through remote programing. So right now, our case managers are available over Zoom for guests, which has been working out really smoothly,” Hausman said.

Y2Y is currently operated with a reduced number of beds for guests as a public health measure. Usually, the shelter is able to accommodate 27 guests — five of whom normally occupy cots for use in short-term, “emergency” housing — but capacity has now decreased to 22 guests. The shelter also now accommodates guests indefinitely, as opposed to the pre-Covid-19 system in which guests were granted beds through a lottery on a 30-day basis.

D’Arms, a former Crimson News editor, said as the vaccine rollout ramps up in Massachusetts, Y2Y has gained more leeway in how it operates.

“Staff have a little more flexibility on some things thanks to the vaccine. For example, we no longer have to wait as long before we turn over beds,” D’Arms wrote. “But most of our guidance from Harvard and [Massachusetts Department of Public Health] is still to go slow.”

Hausman said all guests and staffers were offered vaccines through the Boston Health Care for the Homeless Program and that Y2Y has also instituted programming to inform guests of their vaccine eligibility and to clear up any questions that arise.

“I know our position has been working across multiple sites, often with the same population, in order to make sure folks know that it’s available to them, make sure they get all their questions answered,” she said.

Hausman added that despite its negative impact, the pandemic allowed Y2Y to reflect on the five years it has been operating and develop new programs to promote “guest autonomy.”

“I’m really hoping we can return to a mostly student-run model next year if students are able to be in the dorms and shifting,” she wrote.

Tags
Harvard in the CityCambridgeHomelessnessCoronavirus