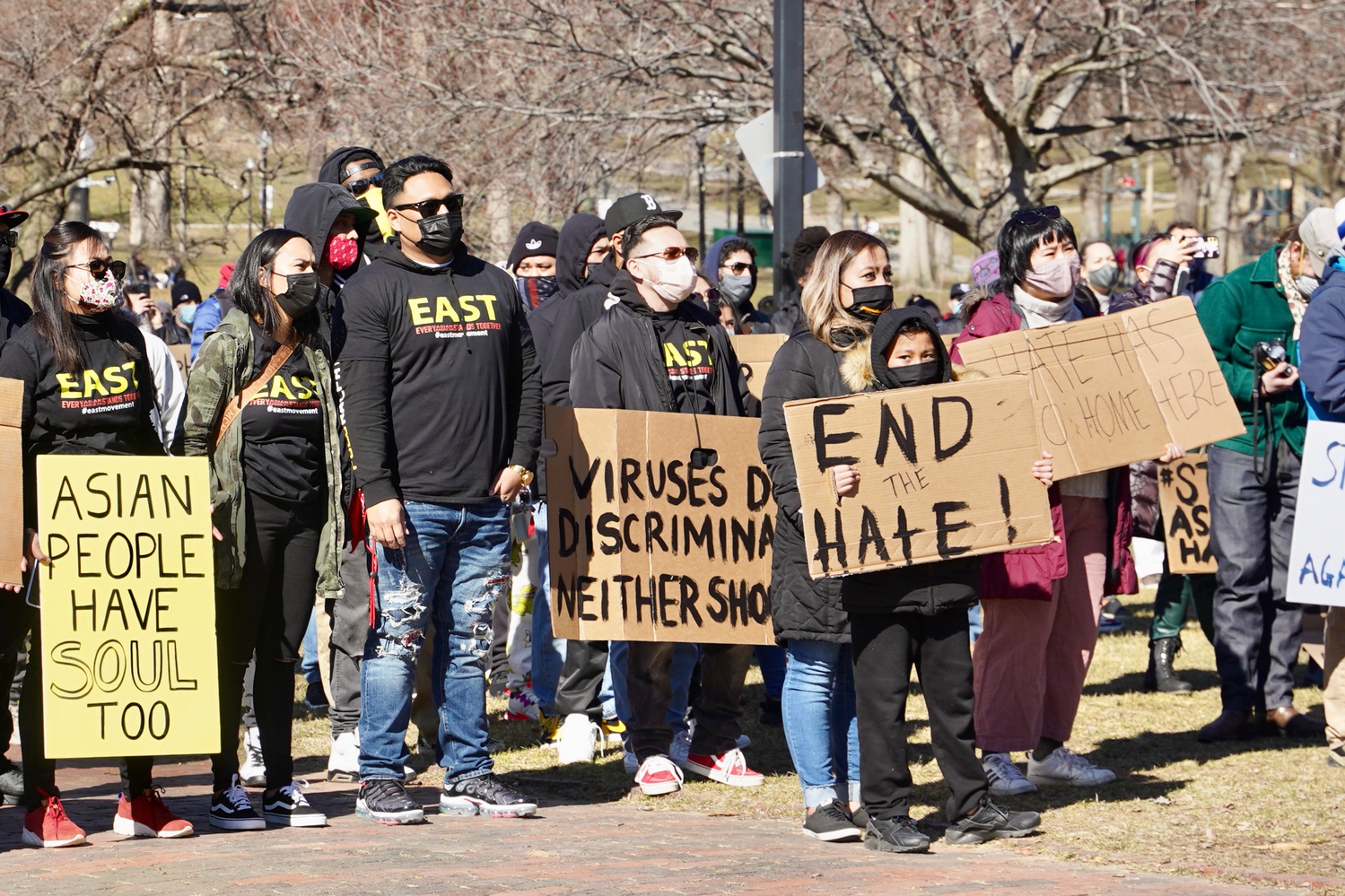 Racism directed against Asian people in America is old and urgent. The recent murder spree carried out in Asian spas and massage parlors in Atlanta — in which eight people, including six Asian women, were shot and killed — is the latest horrific entry in the history of violence Asian American and Pacific Islanders have been subject to in the United States.

This violence sickens and shocks us, but perhaps our shock is a failure in and of itself. Asian Americans have been sounding the alarm on their lack of protection for over a year as attacks against Asian Americans have sharply risen. Covid-19, despicably dubbed “Kung Flu” and “the Chinese Virus” by former President Donald Trump, has triggered a wave of irrational violence against people of Asian descent. Between this piece’s publication and when our board first gathered to grapple with the Atlanta shooting, a woman of Filipino descent was brutally attacked in Times Square by a man spitting that she did not “belong here.” Yet even as the threat became more evident and pressing — even as New York reported a more than nine-fold increase in anti-Asian hate crimes, and an 84-year-old Thai man lost his life in San Francisco to a brutal attack his family describes as racially motivated — most of American society remained unfazed until Atlanta. It took a massacre for us to pay attention.

This is a pattern of behavior for America: Victims of racism that cry out for help are ridiculed, ignored, and accused of crying wolf. Then, when the unimaginable happens, we rediscover what entire communities already knew. The wolf wins the day, and those outside of the marginalized group are shocked and — briefly — sympathize.

Learning from Atlanta must mean learning to listen. To listen when we can still save lives and not just when they’re lost; to listen when we’re told that sustained antiracism that isn’t pushed or pulled by trends is crucial for the safety of our peers.

The deaths of Xiaojie Tan, Daoyou Feng, Delaina Ashley Yaun, Paul Andre Michels, Soon Chung Park, Hyun Jung Grant, Suncha Kim, and Yong Yue were not inevitable, and “learning” from them cannot possibly atone for the undeniable loss and horror their slaughter creates. Our inaction — our failure to combat the pervasive dehumanization of our Asian and Asian American peers — failed them. This failure sears and is irredeemable, but it doesn’t mean acting to combat further anti-Asian violence is futile.

So what does action look like? First, it means stating bluntly and unequivocally that the Atlanta tragedy was an act of virulent racism. Doing so is crucial for the sake of accuracy, as well as plain decency; mincing words on this is racist. It’s cruel that Asian Americans have to cope with the simultaneous traumatization this hate crime and its erasure present, and it is on everyone to set the record straight.

The suspect in the Atlanta shootings claims that he was not racially motivated; that his decision to shoot up three separate Asian-affiliated establishments was a reflection of his ‘“sex addiction” and desire to remove the “temptation” Asian spas presented. The sheriff in the county the crime took place seemingly sympathized, saying on the alleged perpetrator: “He was pretty much fed up and kind of at the end of his rope. Yesterday was a really bad day for him and this is what he did.”

This coddling and utterly absurd response underscore how racism and white supremacy shaped the course and fallout of the Atlanta shooting.

We are a country with a rich history of coddling white, male mass murderers. Authorities and the media extend undue sympathy even when their crimes demonstrate an extreme disregard for human life. It’s a privilege we rarely afford other demographics; one we only seem eager to extend when victims, unlike the perpetrator, belong to a minority group: Cops buying mass murderer Dylan Roof Burger King comes to mind. The dynamic is symptomatic of how racist biases and misconceptions can shape our response to crime, and of how failing to understand their pervasive influence can mean completely misinterpreting the root of tragedies born from racial hatred.

Police sympathy for this suspected murder doesn’t eliminate the fact that the fetishization of Asian women is inseparable from white supremacy — it has been for centuries. It was white supremacy that led to the passage of the 1875 Page Act, a prelude to the Chinese Exclusion Act which specifically barred Chinese women from entering the United States over concerns that they were sex workers. It was white supremacy that helped convince America that it had to establish itself as an imperial power in the Asia Pacific, where Asian women were subject to sexual violence and pornographic objectification, particularly in Vietnam and Korea. And it was white supremacy that allowed hypersexualized portrayals of Asian women to become culturally and pornographically commonplace, perpetuating stereotypes about sexual desirability, docility, and disempowerment.

Racist tropes kill. Atlanta’s six were victims of the same forces that regularly place Asian-related terms at the top of pornographic searches, of the same supremacist bedrock that influenced our foreign policy for decades. This racist past helps explain our murderous present. It might also offer a tentative path forward: solidarity.

Solidarity means focusing on our common societal goal of defeating white supremacy, whatever shape it takes. In doing so, we must avoid pitting urgently needed movements against each other; forcing them to prove their comparative validity. Oppression Olympics are counterproductive, particularly when the common, violent enemy looms as large as white supremacy. Stop Asian Hate must function as a rightful ally of its counterparts like Black Lives Matter; minority ethnic groups standing in solidarity against the lashes of white hatred and rage. As for white Americans: Start fighting white supremacy in your own communities.

Solidarity among marginalized groups counters white supremacy in and of itself by chipping at the model minority myth, used to pit Asian people against other minority groups and to promote the falsehood that anyone can succeed their way out of racism. The financial success of some Asian Americans has been weaponized to perpetuate the notion that other people of color could achieve the same success if only they worked hard enough. The model minority myth not only glosses over the huge income disparity that exists within the Asian American community but also ignores the historical injustices and systemic barriers that have been constructed to keep African Americans specifically in poverty. Expressions of unity are one way to dispel this insidious myth, alongside rejecting any stereotype that caricatures the incredibly diverse Asian American and Pacific Islander community as a monolith.

Harvard needs to play its role as well — ideally beyond telling our peers that they “may wish” they weren’t Asian. We appreciate the routine email stream administrators sent out following the Atlanta shooting. These acknowledgments are necessary. But much like this summer, the real work begins when the emails end; when public outcry and pain are no longer forcing a response out of the administration. Harvard needs to critically examine what it teaches and what it does not teach. In particular, creating an ethnic studies department and furthering curricular offerings in this area is long overdue, especially when it comes to communities subjected to the U.S. as a colonial power, such as the Philippines. The erasure of narratives of American imperial violence has and will continue to cause real-world violence.

Finally, to our Asian American peers: We see you, and understand that Atlanta is just the latest straw after a year-long onslaught of unjustified vilification and hatred. You deserve better than the response Harvard has given you, and more than what this editorial could ever offer. In the aftermath of Atlanta, we can offer no silver lining; only a reaffirmed commitment from this board to listen, learn, and use our voice to discuss and dismantle anti-Asian hate as best we know how.