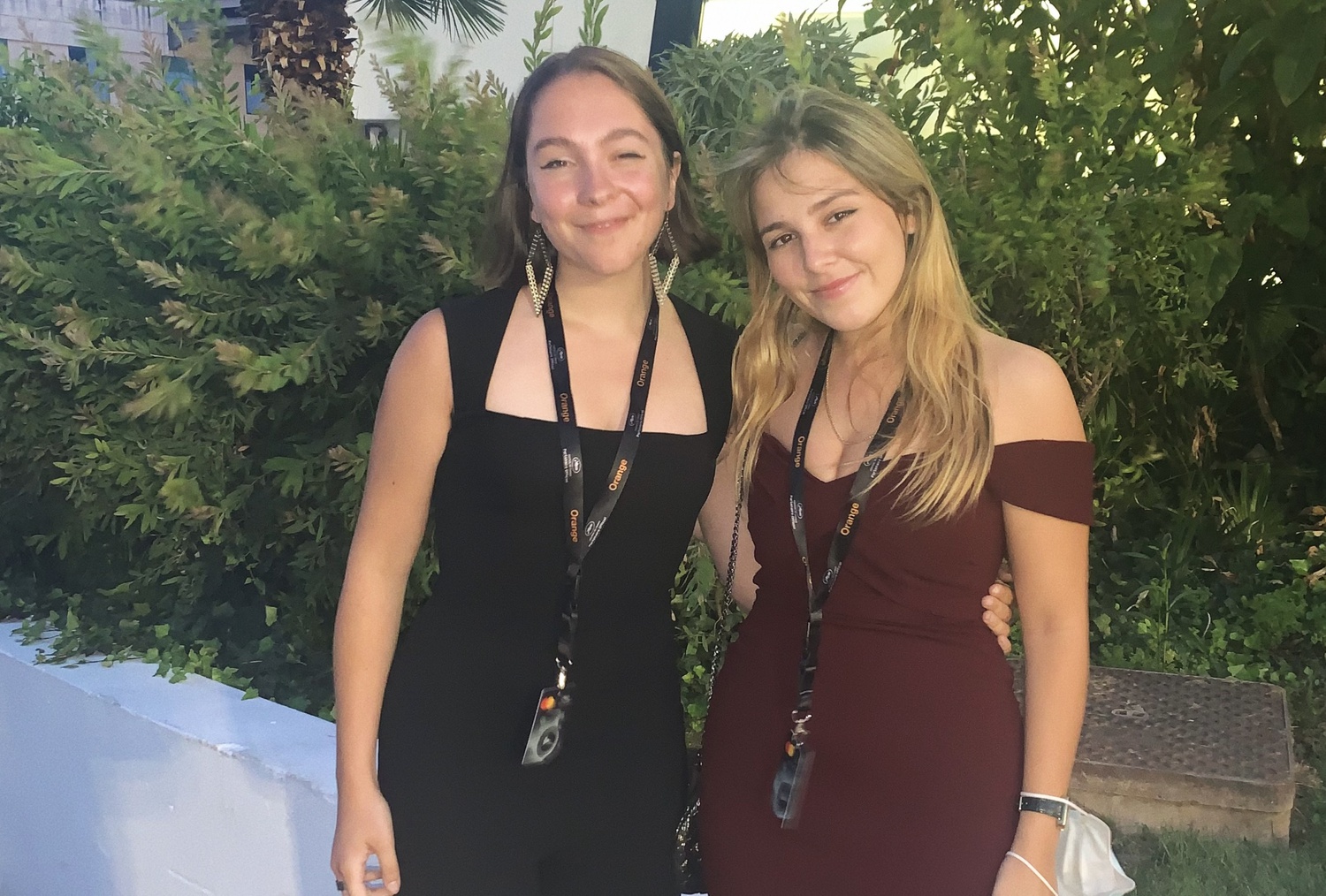 Sofi and Joy after the premiere of “Stillwater.” By Courtesy of Sofia Andrade
By Sofia Andrade, Crimson Staff Writer

As I write this at 3 a.m. with approximately three hours of sleep (thank you, 8 a.m. screenings!), I can’t help but think about the many ways that Cannes has been a dream so far. Sure, we’ve had our struggles — largely because having a yellow press badge means most of our time is spent waiting, either for premiere screenings or for those coveted celebrity interactions — and, of course, the massive sleep deprivation of the past two days is sure to only get worse (Joy is on her 85th cup of coffee for the trip, and I am only exaggerating a little bit). But we’ve also already had some truly life-changing opportunities!

I saw “Annette”’s Simon Helberg (famous for playing Howard Wolowitz in the “Big Bang Theory”) yesterday while exploring the rooms that my lowly yellow press badge can access at the Palais de Festivals. And while I didn’t say “hi,” or even make eye contact, really, I did secure bragging rights in the family group chat, and that’s enough.

That was in the morning. Joy and I spent the rest of the day in and out of screenings, frantically writing reviews in the meantime. We also spent the better part of our night scheming how we could get into the world premiere of the Matt Damon-starring drama “Stillwater” the following day. By “we,” I mean that I would pester Joy with countless different plans for how we could attend said screening, while she would politely smile and pretend that she wasn’t tired of hearing me obsess over any given celebrity for the upteenth time.

When we finally decided it was time to go back to our apartment, it was only around 10 p.m. and we were excited to write the rest of our reviews from home. “We’re so organized!” we told ourselves. “So on top of things!” But we were hit by the perfect storm.

I had multiple calls scheduled for the next hour, which meant Joy was left with the responsibility of navigating Cannes’ surprisingly confusing bus system all alone as we raced through the Croisette, desperate for our beds. The resulting chaos meant that we waited three hours last night for a bus that was never supposed to come, causing us to miss the buses we actually were supposed to take. (It was then that it finally made sense to me why our host, Joy’s own blockmate, gave me the keys to the apartment instead of Joy.)

In our late-night delirium, I felt compelled by some odd force to start singing a song from Leos Carax’s “Annette,” but since we had only just seen it yesterday, I only knew one lyric. I assured Joy this was the best way to get us to Mandelieu, as it would manifest an appearance from “Annette”’s Marion Cotillard, who could then give us a ride back. We soon learned that we had been looking at the map wrong the entire time, so with no show from Cotillard, we finally got onto a bus at 12 a.m. To everyone’s dismay, the “Annette” singing continued on my end (It was stuck in my head! I couldn't help it!) which inspired Joy to begin singing “Jesus Take the Wheel” as a coping mechanism. Much to her chagrin, the result was that I now associate that song with the “Annette” song, which, given how often Joy sings “Jesus Takes the Wheel,” is not good for anyone.

After arriving back at our Mandelieu apartment at around 1:30 a.m., I got to work on yet another review. When I came back to the room a few hours later, I found Joy passed out on the bed, fully clothed, with the lights on. Oh, Cannes, we love you so!

The misfires of yesterday meant that we were more than motivated to make today’s festival schedule the best it could be. And I’m now happy to report that we largely succeeded. The day’s screenings and review-writing went on as planned, but come late afternoon, we had changed out of our business casual garb into prom dresses, jumpsuits, and stilettos. We were ready to make our way, sans ticket, into the “Stillwater” premiere, even if that meant standing for hours outside in six-inch heels in the blistering French Riviera. Much to our surprise, we were successful!

Walking up the red carpeted steps of the Grand Théâtre Lumière, we saw the stars just a few steps below us. Wanting to immortalize the moment, we attempted to take pictures but were promptly reprimanded by festival staff. Even still, the relief we felt after days of wanting-in to these highly coveted black tie screenings was unmatched. Afterwards we met up with former Crimed extraordinaire, Caroline A. Tsai ‘20, who used her Cannes expertise to help us hatch a plan to catch former Harvard student Matt Damon’s attention as he left the theater. “We’re from Harvard, too! We live in Lowell House!” we yelled. The fact that only Joy lives in Lowell House and Caroline has graduated was irrelevant to us. Damon lived in Lowell, which meant we would say we did too. Despite our best efforts, however, Damon quickly rushed away from the throngs of fans that had similarly hoped to catch him at the exit, crushing our dreams of including a quote in this blog post.

But don’t worry, dear Crimson readers, we have bigger and better plans for the next time we chance a celebrity rendezvous. Stay tuned.