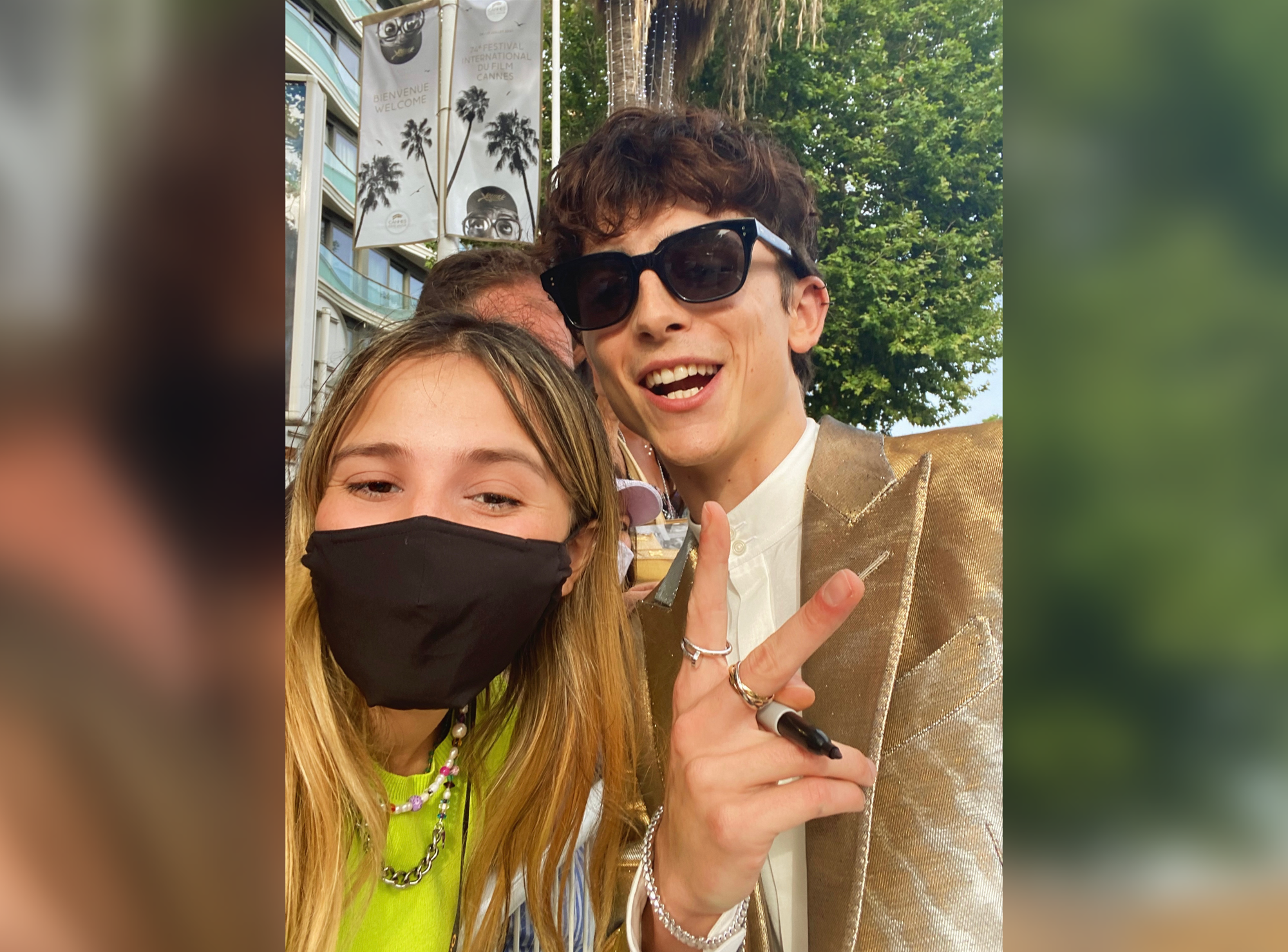 On the twelfth of July, in the year of our Lord two-thousand-twenty-one, I met Timothée Chalamet.

He was on the red carpet for his very first Cannes premiere, the Wes Anderson-directed “The French Dispatch,” the gold of his metallic Tom Ford suit dazzling under the bright Cannes sunlight. I was right behind the barricade, sweaty and tired after waiting in line for five-plus hours in the brutal heat. By all accounts, it was a match made in heaven.

After coming all the way to the French Riviera for this express reason (please don’t tell Crimson film execs Lanz Aaron G. Tan or Jaden S. Thompson), the 5-second conversation I had with him and subsequent selfie were proof it was all worth it.

The odyssey to the red carpet had started two days before, when Arts Chair emeritus Caroline Tsai ‘20 and I — the resident Timothée fans at Cannes — started our effort to secure “French Dispatch” tickets. Waking up at the ripe hour of 7 a.m. to check the festival tickets page, we were heartbroken to find that all three screenings of the film were sold out. (Yes, there were only three opening screenings for the biggest film of the festival. And yes, one of them was at one of the smallest venues at the festival.) Thus began a 48-hour spell of compulsive refreshing, both of us desperate to find a coveted ticket. I, for one, checked the ticketing website on my phone every 15 minutes, every 20 if I was feeling risky.

“SOFI,” Caroline texted our Cannes group chat at 10:25 p.m. on Sunday. “HE’S HERE.” I was in a late-night screening when I surreptitiously opened my phone to see a picture she had sent of Chalamet with a fan at a French airport. Still in that aforementioned screening, I started to log into the ticketing website again, my heart racing.

“DISPATCH OPRN! GONNOW!” I texted Caroline and Joy at 11:28 p.m., the typos a result of the fact that I was holding my phone under my seat while simultaneously trying to watch an entire film and take notes on it in the dark. The 7:30 p.m. slot had opened up, and I wasted no time in booking. At 12:37 a.m., Caroline finally responds: “I BOOKED 7:30 FRENCH DISPATCH … THE RELIEF COURSING THROUGH MY BODY AT THIS MINUTE.” I watched the rest of my screening, for the first time in days, totally at peace.

The next morning at 10:03 a.m., from Caroline: “good morning rise and shine it’s french dispatch day.”

Our plan for the rest of the day was ambitious: Wake up, get dressed, and arrive at the barricade closest to the red carpet as soon as possible, armed with charged laptops and phones to carry us through a day’s work. At around 2 p.m., we settled in, made some friends, and prepared ourselves for hours of waiting on the concrete floor. At around 6:30 p.m., the celebrities started rolling in in their black vans. Finally, after a string of folks-we-wish-we-knew-but-didn’t, we saw Bill Murray staring out from a Greyhound Bus down the road. We all lost it.

The cast for “The French Dispatch,” including director Wes Anderson, all appeared out from the bus like a vision: Tilda Swinton’s bright-pink-with-green-sequins blazer; Owen Wilson, Benicio Del Toro, and Anderson in their black suits; and eventually, in the distance, Chalamet in that iconic golden getup, complete with pierced ears and silver Cartier rings. What came next was a blur: we screamed his name, he came up to us, I asked for a selfie, we chatted, he signed my notebook, the next person called and he moved on. Like a dream, it was over before I really knew what was going on.

With our quest complete, Caroline and I ran back to the Palais, quickly debriefed over a San Pellegrino, and got to our “French Dispatch” screening with just enough time to post my Timothée content on Instagram. By the time we left the theater, the stan accounts had found it, and I checked my phone to see hundreds of notifications (and texts from my mom with screenshots from every account that had reposted it). I also found, much to my surprise, that someone had taken a video of the conversation we had (if you can even quantify 5 seconds as a conversation), and that it was now everywhere. Of course, that wouldn’t be a problem if I had remembered to carry a conversation like a normal person, but I didn’t. He asked me if I was American, I said yes. He asked me how I got here, and my very frazzled self thought it would be a good idea to answer “on a plane.” Before I could save myself, he was gone. (But because I have no regrets, I’ve linked the video for your enjoyment here.)

Although I’ve been occasionally cringing at that response throughout the day, I’ve found solidarity from my few, but sympathetic, supporters. Here’s to hoping he’ll see this and give me a do over?