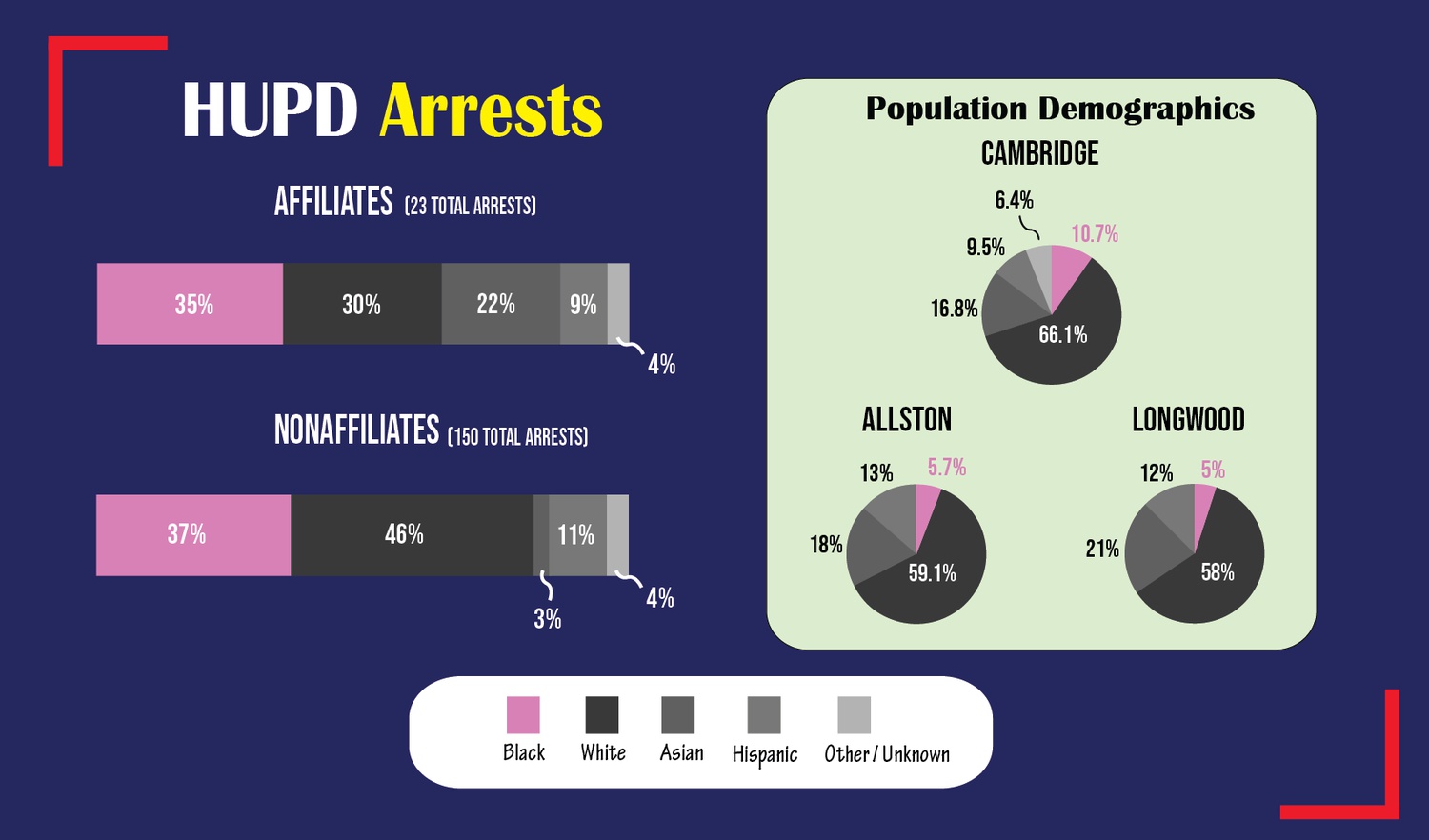 The Harvard University Police Department has been arresting Black people at a disproportionate rate compared to the general population over the last three years. By Yuen Ting Chow
By Raquel Coronell Uribe, Crimson Staff Writer

The Harvard University Police Department has been arresting Black people at a disproportionate rate compared to the general population over the last three years, according to data from the department’s new workload and crime dashboard.

From 2018 to 2020, 37 percent of the non-Harvard affiliates arrested by HUPD have been Black, per the dashboard. In contrast, in the cities in which HUPD operates, only 10.8 percent of Cambridge residents, 5.7 percent of Allston residents, and 5 percent of Longwood residents are Black.

Arrest rates of Harvard affiliates show a similar trend. Thirty-five percent of affiliates arrested have been Black, a much higher percentage than the 7.6 percent of undergraduate and graduate students and 6.5 percent of faculty and staff members who are Black.

The dashboard, which the department launched in June, was a recommendation of the external review by 21CP Solutions into HUPD launched by University President Lawrence S. Bacow. The review, published last December, recommended a wholesale re-evaluation of HUPD’s policing philosophy and procedures.

The dashboard includes three calendar years’ worth of data, and according to the HUPD website, “serves to improve communication, information-sharing, and transparency.” The dashboard displays a breakdown of arrests and criminal complaints by several key points.

Undergraduate Council President Noah A. Harris ’22, who serves on a committee tasked with advising HUPD, said the disproportionate arrest figures were not shocking to him.

“I wasn’t too surprised, and that isn’t a good thing,” he said.

“We have to figure out, okay, now that we know that we have the dashboard as proof that these are issues, what are things we can do to mitigate those issues?” Harris said.

Ione Barrows, a graduate student and spokesperson for the Harvard Alliance Against Campus Cops, a student group advocating for Harvard to defund HUPD, wrote in a statement that the data “confirm what student organizers have long been saying.”

“Harvard spends millions of dollars a year on a police force that violently targets racialized people, as well as poor, unhoused, and other marginalized members of our community,” Barrows wrote. “There is no reform that could expunge racism from HUPD.”

HAACC published a report in December 2020 titled “Harvard’s Finest?: The Case for the Abolition of the Harvard University Police Department.” The report, which group members spent five months researching and producing, revealed similar statistical trends to those documented in the new dashboard and set forth a seven-point list of demands it believes will set in motion the abolition of HUPD.

HUPD spokesperson Steven G. Catalano wrote in an emailed statement that all field stops and arrests HUPD makes are based on “reasonable articulable suspicion or probable cause that a crime has occurred, is in the process of occurring or is about to occur.”

“The HUPD takes seriously its responsibility to protect the rights of all members of our community,” Catalano wrote. “As part of that commitment, officers will not stop people in a manner that unlawfully discriminates on the basis of race, age, sex, national origin, ethnicity, religion, gender, gender identity, gender presentation, or sexual orientation.”

Catalano also said HUPD takes “many factors” into account when deciding to arrest someone, including the seriousness of the offense and a victim’s preferences in how they would like the case concluded.

Nationally, Black people are five times more likely to be arrested than their white counterparts, according to a 2020 analysis by ABC News. And in Massachusetts, Black people make up just 6.5 percent of the population, but represent 17.1 percent of the criminal caseload, per a 2020 Harvard Law School report.

Chijindu G. “Jindu” Obiofuma, a former HLS fellow who co-authored the report, wrote in an email that the criminal justice system identifies Black people as targets for abuse, arrest, and imprisonment.

“Centering disparities play a role in uplifting that truth—that Black bodies are intentionally singled out for violence, even when marginally represented in surrounding communities—but there is no acceptable percentage of people deserving of the brutality of arrest and imprisonment, especially when the violence of policing is so deeply disconnected from any relationship to safety or justice that might be used to excuse it,” she wrote. 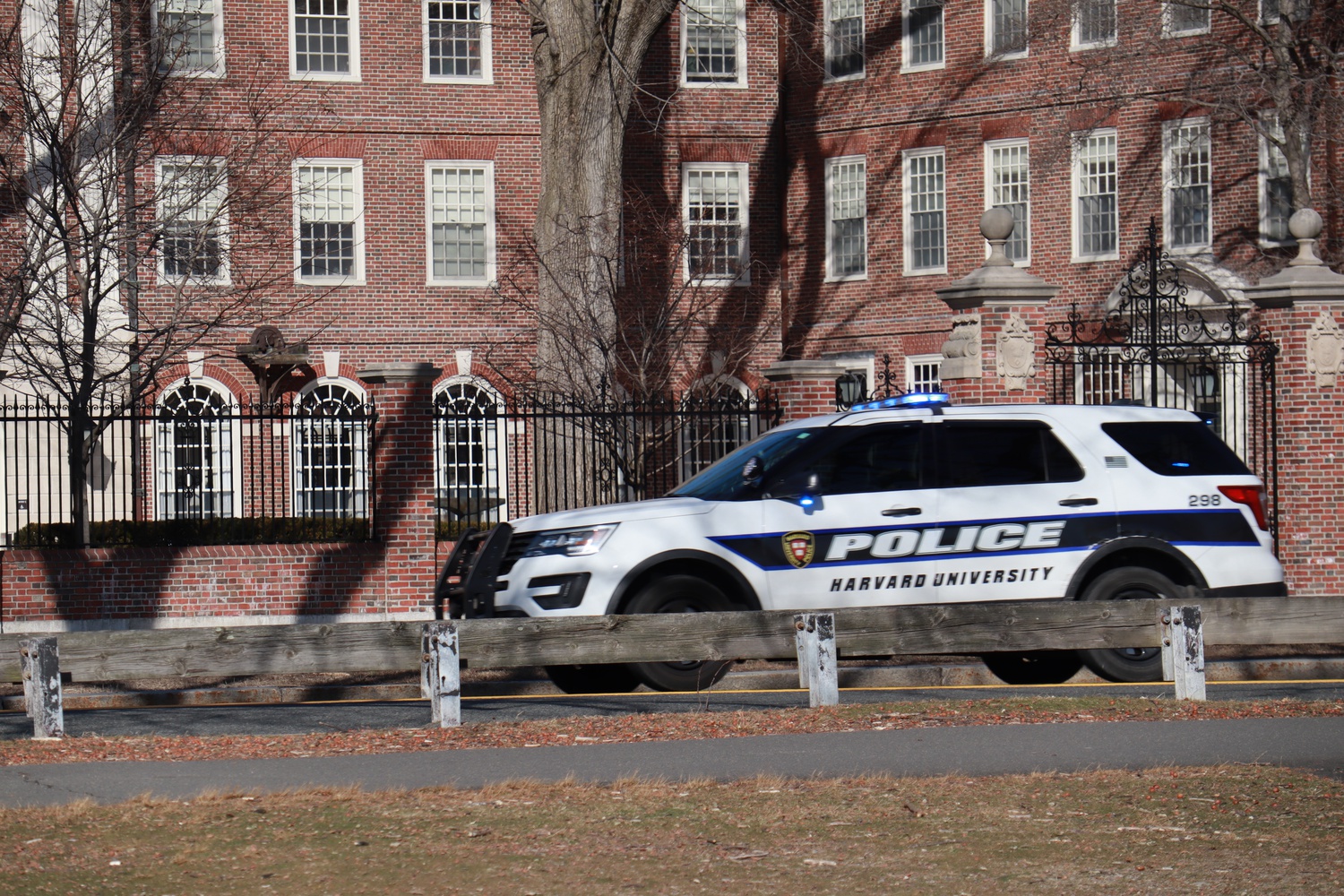 The Harvard University Police Department has been arresting Black people at a disproportionate rate compared to the general population over the last three years, according to data from the department's new workload and crime dashboard. By James S. Bikales
Advertisement

Per the HUPD dashboard, of all the incidents which resulted in arrest or in HUPD seeking criminal complaints between 2018-2020, just 11 percent of them were initiated by HUPD officers, while 89 percent were called in by affiliates.

A HUPD employee who spoke on condition of anonymity to describe figures not yet released to the public said that of the incidents resulting in criminal charges involving Harvard affiliates of color, zero were initiated by officers and were all called into the department.

Of the incidents in which HUPD arrested people of color not affiliated with the University, 11 percent were initiated by officers, and 89 percent were called in by Harvard affiliates, according to the HUPD employee.

Harris said that these figures underscore the need for alternative resources to HUPD, such as more robust mental health resources. He said that while the decision to call HUPD is a “gray area,” students have access to non-HUPD resources if they choose not to.

“When we are calling HUPD, we have to check our own bias as well, and so I think that’s something that we as a community have to work on and that a lot of communities have to work on,” Harris said.

“HUPD still has a lot to work on,” Harris added.