‘Sometimes I Might Be Introvert’ Review: Big Hit, Little Simz 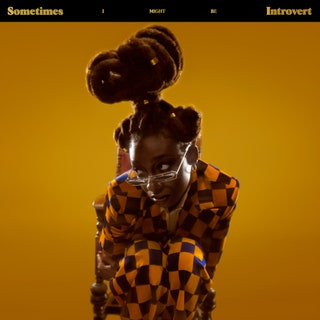 Cover of Little Simz's "Sometimes I Might Be An Introvert" By Courtesy of Little Simz / Age 101 Music / AWAL
By Caleb K.P. Gordon, Crimson Staff Writer

For the hip-hop head, Virgo season has been an exciting period of musical output. While the rest of the world debates “Donda” versus “Certified Lover Boy,” London rapper Little Simz has jumped across the pond to win the September album drop series with her stunning new release, “Sometimes I Might Be an Introvert.” Amidst the clamor of rap’s heavy-hitters, Simz’s homage to the underdog rises to the top and serves as a masterclass for any aspiring (or established) artist on how to turn beats and sounds into a work of art.

While Simz’s strong suit has always been her ability to string together language to form hard hitting bars, “Sometimes I Might Be Introvert” transforms her from an artist who can just rap well to one who can build a narrative. In a genre that so often rewards those who are the loudest and most brash, “Sometimes I Might Be Introvert”stuns in its technological subtleties and details while celebrating the real-life introverts who do the same.

While many may not know Little Simz by name, those who are active in the TikTok cinematic universe will more than likely remember her viral song “Venom.” The track is about women being overlooked in rap, and the trend associated with a 16-second snippet of that song that made it into the TikTok audio (“Never givin’ credit where it’s due ‘cause you dont like p*ssy in power / Venom”) is primarily women discussing their subversions of the patriarchy. Little Simz amplifies these messages of empowerment on “Sometimes I Might Be Introvert” and extends them to the women who global movements so often leave behind.

The album is a love letter to Black people broadly, and Black women specifically — honestly reflecting on the international struggles that accompany Blackness and womanhood and the beauty that arises out of the pain. This is literally shown on the second track, “Woman,” where Simz line-by-line calls out and praises the women of the diaspora’s nationalities by name. This sentiment is further echoed in other tracks like the intro song, “Introvert,” where Simz reflects on the societal expectations of silence that many Black women face regularly and simultaneously raves about their strength and wisdom.

What makes the album especially powerful is Little Simz’s willingness to embrace her own struggles with these themes. On “Little Q, Pt. 2,” Simz reflectes on a stabbing her cousin suffered and the dangers of systemic violence in her London neighborhood. While a less methodological rapper may share the story and move on, Simz reckons with the implications of the interaction. She refuses to fully victimize her cousin or condemn the perpetrator, but instead casts a direct condemnation on the racist societal structures that underscored the violence. She wrestles with this same conflict between individual responsibility and social pressure on “I Love You, I Hate You.” Underneath a beat repeating those words, she raps about her relationship with her father and how she refuses to forgive his lack of parenting but is growing to understand him as an imperfect man with his own trauma and challenges.

While every song delivers lyrically, Little Simz amplifies her words with incredibly diverse, consistently strong production. In just the first three songs, Simz moves from a bold marching band, FAMU Marching 100-esque underscore on “Introvert,” to a swinging jazz line on “Woman,” and ends on “Two Worlds Apart” with a sample from Smokey Robinson's 1975 ballad “The Agony and Ecstasy.” The rest of the album sees Simz sample children's choruses (“Little Q, Pt. 2”), transform corny Ed Sheeran-style guitar chords into a suave beat (“I See You”), and reveal herself as a Nigerian PinkPantheress complete with disco synth and fluffy vocals (“Protect My Energy”). Few artists can offer that level of versatility without sacrificing cohesion and consistency. What the listener is left with is a series of songs that can stand alone but shine even brighter together.

The primary fault of the album lies in its spoken interludes. Thinking back to some of the most iconic album skits like SZA’s badass Grandma or Frank Ocean's drug-fearing “mom,” a successful skit will follow roughly three components: be short and sweet, be strongly connected to the message of the album, and not be corny. The skits on “Sometimes I Might Be Introvert” fall short on rules one and three. “The Rapper That Came to Tea,” the longest of the three full length skits, sits at an unbearable two minutes and forty-five seconds. Most of the plots are conversations between a god-like character telling Simz that she can do anything she sets her mind to. This is all underscored by a mythical beat with 10 too many flutes that could also serve as the background music of Wizard101. Simz almost infatalizes her listener by spoon-feeding them the album's messages that she has clearly alluded to in the better parts of the album.

Skip the interludes, however and the album is left with 16 stunning songs. This body of work is the perfect combination of music and message; it is simultaneously empowering and fun to listen to. Fans of any rap subgenre should be a fan of Little Simz, because she gives a taste of everything to the listener without overwhelming. On the back of three strong albums, Little Simz had nothing to prove, but instead of complacency, “Sometimes I Might Be Introvert” is a victory tour of one of the great rap talents of the generation. The album is not perfect, but it does more than enough to solidify Little Simz as the queen of UK rap — and a strong contender for album of the year.

— Staff writer Caleb Gordon can be reached at caleb.gordon@thecrimson.com