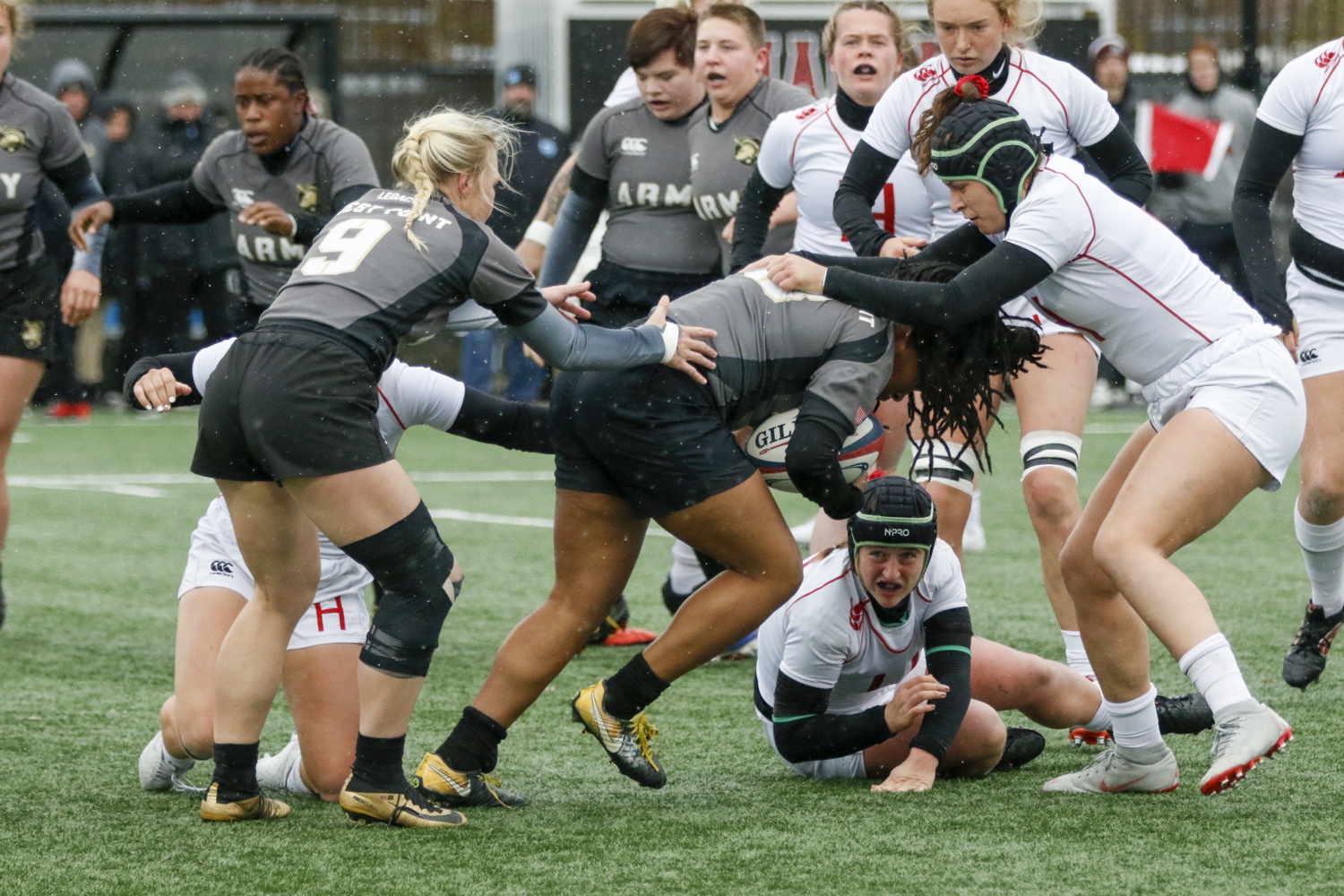 Harvard women's rugby finished the 2019 campaign as national champs, defeating Army West Point in the cold and rain. Friday's contest against Mount Saint Mary's is the first time back for the Crimson since that day in November 2019. By Timothy R. O'Meara
By Derek Schaedig, Contributing Writer

In 2019, Harvard women’s rugby earned the program’s first-ever National Intercollegiate Rugby Association (NIRA) national championship, defeating the then-undefeated Army West Point squad in the final game of the year. After being a club team since 1982 and elevating to the varsity ranks in the 2013-14 season, the program reached its pinnacle in the 2019 season. Then, four months later, Harvard students were informed they must leave campus with no confirmed return date due to the outbreak of Covid-19.

A year and a half later, the Crimson is finally back and ready to further the program’s success. However, the team is making sure to approach this year’s campaign with a calculated mindset.

“Something we’ve actually been talking about is not thinking about it as defending a national title because so many of our team wasn’t there for the national title, but having the mindset that we’re going to go out and win it again,” co-captain Cassidy Bargell confirmed. “It’s not ours to lose, but it’s ours to get back.”

Bargell’s co-captain Erica Jarrell is on the same page.

“It’s so much easier to be an underdog than it is to live in the past and try to recreate something,” Jarrell said. “It’s always true, but especially this year we have a different team than the team that won that title.”

A big difference from this year’s group compared to that 2019 roster is that, compared to clubs at other colleges who competed last season, many of the Crimson players have not competed in collegiate action yet. Nonetheless, the group feels ready to tackle this new challenge.

“I think that our strength is also our challenge, and I also think that our team is up for that challenge and putting in a lot of extra work to try and fill that gap as much as possible,” head coach Mel Denham said.

Although they are yet to have collegiate rugby experience, the team’s underclassmen are ready for the job, and Jarrell has taken note.

“They [the new members of the team] are also all so driven,” Jarrell said. “They want to keep up, and not just to keep up. They already want to lead, which is really exciting.”

Both Jarrell and Bargell were elected captains during the pandemic, and the task of leading the team has not come without its challenges.

“I think it’s been really challenging because we don’t have any role models or anyone we’ve watched captain during a pandemic in person before, so we’ve had to learn a lot on the fly, but I also think that’s been fun because we’re facing new challenges,” Bargell said.

“It’s a lot of very intentional conversations about stuff we would normally never have to worry about,” Jarrell added. “From the night of [captain’s] elections, if not the next day, we’ve been having meetings about how to foster leadership and rebuild our team culture with an unprecedented number of people who have never seen our team before.”

However, despite all of the adversity that the team has faced amidst Covid-19, the leadership group has adapted and continued to build a winning culture.

“We learned pretty quickly that being in Zoom classes all day and then trying to get on team Zooms and actually trying to do official, formal stuff was not the most effective way for people to connect, so we really put that on our leadership group,” Denham said. “You can find engagement on Zoom that people want to do, but you’ve got to find the right way to do it.”

The team had weekly Zoom meetings, sometimes with the coaches present, but mostly as only team members discussing international matches being played, various strategies to implement, team workouts, and even building chemistry through team craft nights.

The Crimson has no shortage of strong opponents this season; however, Harvard faces most of them in the latter half of the schedule. The squad’s players and coaches are making sure to approach every game with a mindset that will give them the best chance of success.

The team has its first match this Friday, September 3, at 7 p.m. against Mount Saint Mary’s University. The Crimson last faced off against the Mountaineers in 2018 in a game in which Harvard handily defeated the Maryland school 39-0.

“This weekend our season opener is really going to be a tone-setter for going out there, and I honestly don’t know what Mount Saint Mary’s is going to bring,” Denham said. “They have some big, heavy, aggressive forwards and big, heavy runners, and we have to show up ready to go out there and be our best because, otherwise, I think that could very quickly spiral into something.”

As the Crimson continues to grow throughout the season, Harvard will face off against opponents that have dealt the team tough losses and close matchups in the past.

“I think that when we get to Brown, that’s going to be a big game for us too, so I think really the season opener is huge for us to really go out there and play at a level that we want to play at and not underestimate our opponent,” Denham said. “Quinnipiac will be big, and then Brown is going to be a really big one before we head into the Army and the Dartmouth games.”

“Playing Dartmouth and Brown are going to be more high stakes than usual because it’s half of our Ivy League championship, and also they have a pretty strong recruiting class,” Jarrell noted.

Finally having the chance to return to the field as a team for the first time in nearly two years, the Crimson is eager to begin the year this weekend and pursue another national championship.

“We have to go out there with an attacking mindset to go and get it [a national championship] again,” Denham said. “This is a new journey for us, and that journey is going to look different.”