‘Babel’ Review: Critiquing the British Empire with a Fantastical Twist 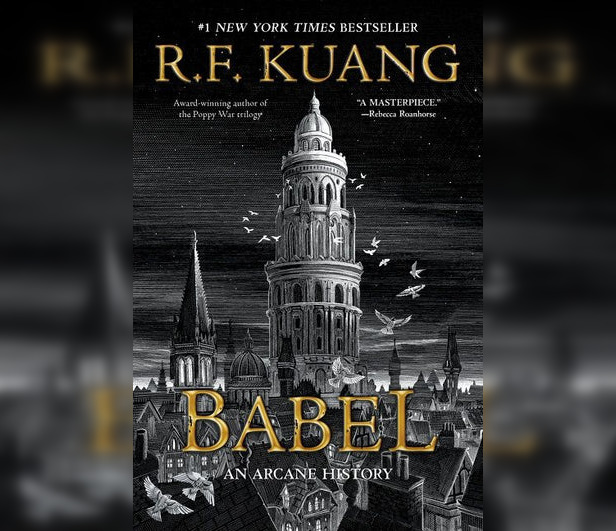 Language has power. It can influence our thoughts, interactions, and even the way we dream. This multifaceted influence of language is explored in R. F. Kuang’s “Babel: Or, The Necessity of Violence: An Arcane History of the Oxford Translators’ Revolution.” Set in Oxford during the 1830s, “Babel” imagines a fantasy world in which the study of languages, alongside the smelting of silver, can create magic.

Readers follow Robin Swift, a Chinese boy raised in England, as he begins to see how his powers are harnessed by Britain to control its worldwide empire. Kuang’s novel critiques imperialism and academia by utilizing a fantastical version of Oxford and underrepresented voices from the British Empire. Although “Babel” is occasionally straightforward in its themes, its well-researched plotline and amazing characters create a stunning alternate history which successfully critiques the legacy of empire.

R. F. Kuang has distinguished herself as a respected fantasy author through her “Poppy War” trilogy, which uses detailed research to reimagine Chinese history. Kuang’s work reflects her academic career — she has studied at Georgetown, Cambridge, Oxford, and is currently pursuing a PhD in Eastern Languages and Literature at Yale. The author’s deep passion for history and language are again put on show in “Babel,” making it a dream read for any academic, especially those who are interested in the social implications of empire or linguistics. Every historical reference and etymological phrase has been carefully founded in fact.

The struggles of the novel’s main character, Robin, are also based in the true stories of those oppressed under the British Empire. Robin is from China, but after his mother’s death is swept to Britain to be educated in the magic of language to serve the Empire. While there, Robin is constantly taunted for his Chinese heritage. At Oxford, he meets Ramy and Victoirie, who are also outsiders from India and Haiti, respectively. In “Babel,” these characters are allowed at Oxford, which in the 1830s would not have accepted people of color or women, yet they face discrimination at every turn. Kuang shows how foreigners in Britain were seen as exotic and uneducated, no matter their status in society.

Despite the clear research that went into the project, it sometimes felt as if Kuang was unsure about her own work. In an author’s note, she writes that “anyone who has spent time at Oxford will scrutinize your text,” and she seems to carry this anxiety throughout her piece. This insecurity spoils the novel’s nuance, since Kuang seems to constantly want to justify her ideas. “Babel” is littered with footnotes, which occasionally enhance the text by explaining certain foreign phrases, but chiefly disrupt the reader’s immersion. The tone comes off as awkward and unnecessary and gives the impression that Kuang did not trust the reader to comprehend basic European history or draw their own conclusions concerning the characters’ conversations. The novel could have benefited from the removal of these comments, which inject Kuang’s voice into the narrative rather than clarify confusing remarks.

While the fantastical magic system of the novel is compelling, it isn’t explored comprehensively enough. Magic in “Babel” is an intriguing combination of silver bars and linguistics, and the novel’s characters study languages and etymology in order to harness the magical qualities of silver. The reader is told that silver powers almost everything in the British Empire, including steam engines, water purification, and even the construction of Westminster Bridge. This system of magic is intriguing since it is rooted in the realm of academia and language, but the main characters are never able to truly access its power. Although they learn to use silver as they progress in their studies, their education never gets completed, and they lack the ability to harness its full power. While this lack of knowledge may be a deliberate metaphor for the British Empire’s ability to bar certain activities from its oppressed subjects, it also leaves the reader unsatisfied.

The unexplored aspects of the magic system leave the reader to ponder if “Babel” should even be a fantasy novel. Kuang’s research was amazing and most of its ideas could have been communicated in an alternative history of real-life Britain. Instead, Kuang sets her novel in a fantasy world, which is intriguing but less developed than her critiques of empire. “Babel” could have reached its full potential if its magical elements were explored further.

While Kuang’s disruptive voice and unexplored fantastical elements do affect the reader’s perception of “Babel,” the novel is still well worth the read. It allows its readers to reconsider their stance on the British Empire and see how outsiders were discriminated against at Oxford and England at large. Most importantly, it is an exciting foray into history and how it can be shaped by individuals. As Kuang writes: “History isn't a premade tapestry that we've got to suffer, a closed world with no exit. We can form it. Make it. We just have to choose to make it.” “Babel” chooses to make a new version of history, and does so quite creatively and successfully.