‘Queen of Magic’ Review: Magic, Family, and Acceptance. Can One Woman Have it All? 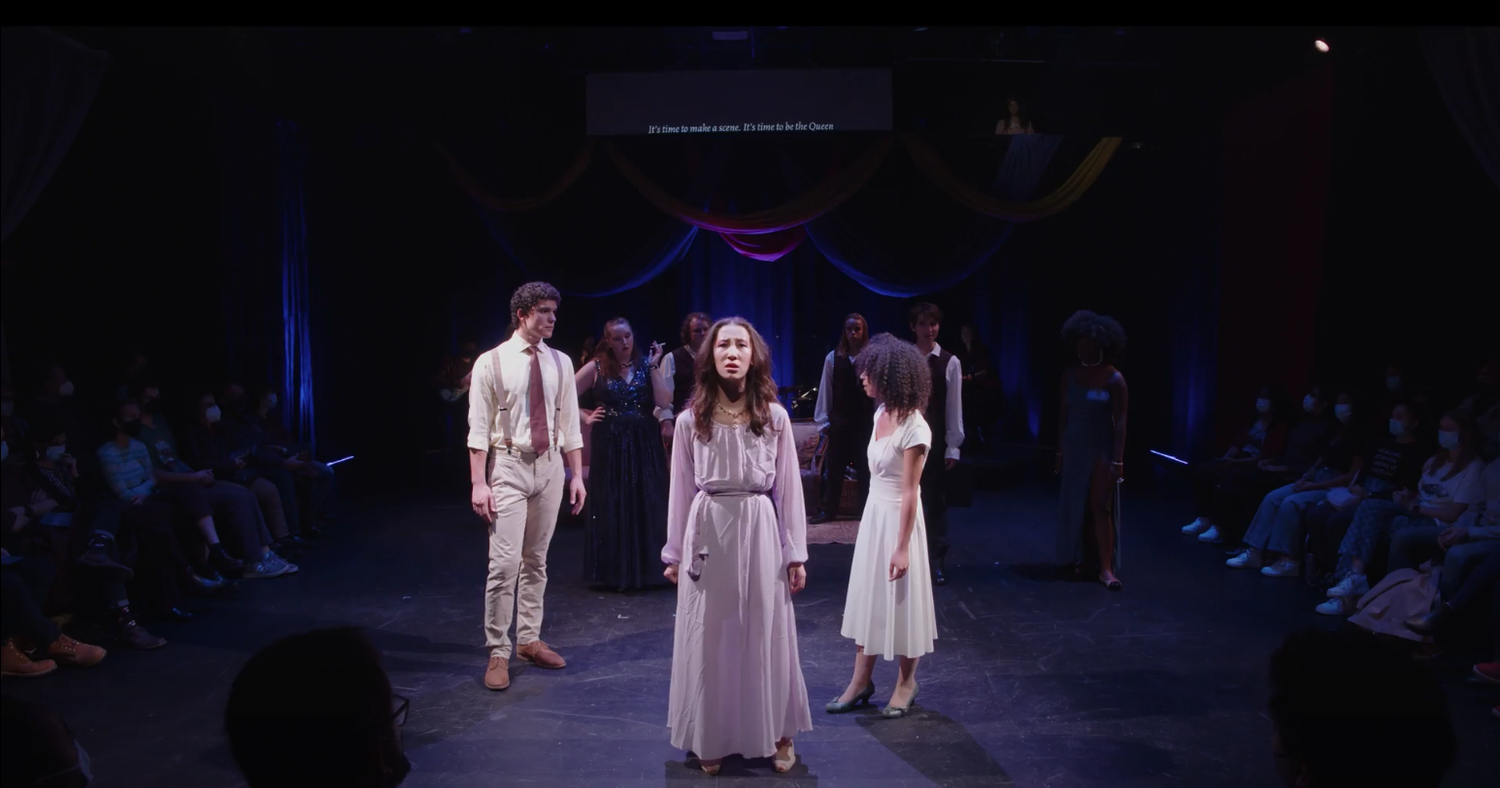 Cybèle Fasquelle '25 as Adelaide Herrmann in "Queen of Magic." The musical opened Dec. 1 at the Loeb Ex and run through Dec. 3. By Arwen Zhang
By Xander D. Patton, Contributing Writer

Described by the director as a “tale of ambition, friendship, and legacy," the “Queen of Magic” delivers a story that truly captures the complexity of narratives concerning successful women. Co-Created by Andrew G. Van Camp ’23 and Veronica F. Leahy ’23, and directed by Eleanor M. Powell ’25, this musical does not disappoint audiences. The show delicately dissects the ethics of selfish characters who also contribute to a massive social movement in a very selfless manner. At the same time, the “Queen of Magic” considers sacrifices that women often need to make to truly attain success, examining characters who are forced to make tough decisions between their loved ones and their careers. These complex themes ultimately turn into a thought provoking, visually beautiful, and overall emotionally mature production.

When a viewer of the “Queen of Magic” steps into the Loeb Ex for this show, their initial reactions are likely to be ones of shock by how full the small space feels despite the minimalist staging. Packed to the brim with audience members eager to witness this completely original piece, it is easy to feel how personal this performance will be. With a pit consisting of only four musicians — a keyboardist, a drummer, a guitarist, and a bassist — and a stage with only four pieces of furniture — a chair, a rug, a couch, and a basket — the performance urges audiences to see the power that a smaller show like this one can have.

At the core of this story is the life of Adelaide Hermann (played by Cybèle Fasquelle ’25), the real life “Queen of Magic,” and her long lost memoir. Adelaide was famed as one of the first female magicians to be recognized in the field. Set in the late 1800s and early 1900s, this musical details her career and its price, particularly her own experiences and those of her niece Adele (played by Devon N. Gates ’23). It is through the pain that the pursuit of career has brought these two women that audiences are introduced to a central conflict of the plot: The idea that societal pressures and inequalities that women face lead them to have to sacrifice more to reach the same level of success as their male counterparts.

The audience sees the story of Adelaide and Adele through the lens of Adelaide’s memoir, as Adele faces new reflection after she learns that her beloved aunt Adelaide — a woman who has provided her with an outlet for so much gratification and pain simultaneously — has passed. Thus we witness a series of flashbacks which allow audiences to zoom in on this ever complex aunt-niece relationship whose tensions were heightened tenfold by the pressures placed on these women as they try to make a name for themselves.

To Adele, Adelaide has always been a mentor character, one who has encouraged her to do what’s best for her, encouraging her to always pursue what she wants — especially if that thing is pertaining to the world of magic. Adele loves her aunt and even places her on a pedestal at times, being one of the first people to truly call her the “Queen of Magic.” But no matter how amazing she may be as a mentor, Adelaide is just human, and therefore makes very human mistakes. Becoming overwhelmed with her own stress, Adelaide comes to neglect Adele in her time of need, barely noticing when Adele finally decides to quit magic.

The other half of this story is set in the “present day” of our characters, the early 1930s. At this point in time, Adele has a well-established family life, having married the love of her youth, an architect named Charles (William R. Murray ’26), and even had a child with him. Due to the important impact that Adelaide had on her life, Adele feels inclined to tell her daughter about Adelaide’s legacy after her death. However, Charles is extremely opposed to this, not wanting his daughter anywhere near the world of magic that harmed his wife so dramatically. Tensions rise and arguments ensue from both sides, with Charles even becoming overly controlling and burning anything remotely related to magic or Adelaide.

Through these deeply interpersonal conflicts that are inevitably influenced by the patriarchal structures of the time period, this play makes a blatant commentary about the gravity of achieving success as a woman and the pain that inevitably comes with it. This play is not easy for audiences to watch, nor should it be, as it attempts to reflect the harsh realities of the world. However, it does provide its audience with hope, ultimately asking it to find a new better way of thinking, turning the stories of struggle like the one they just watched into something that will create a positive impact for generations to come.