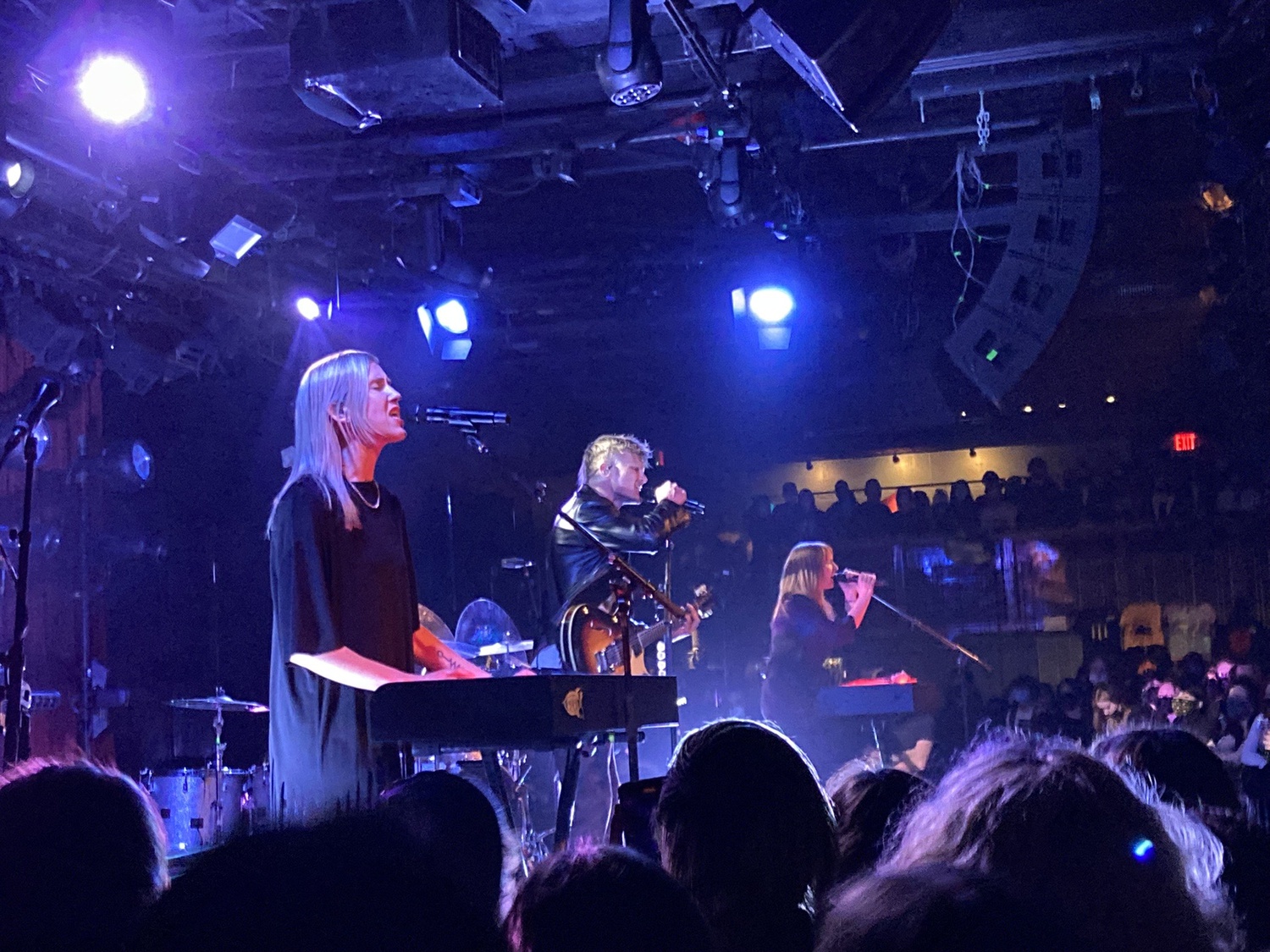 On Jan. 30, the entire block of the Paradise Rock Club — the small yet historically iconic venue next to Boston University — was surrounded by teens dressed in all black. The audience of new and returning fans were willing to brave the cold to see punk rock band Mother Mother play live in Boston at the venue for the first time in three years. The band has had a resurgence since 2020 due to their older music garnering popularity on TikTok — specifically, the tracks “Hayloft,” “Arms Tonite,” and “Wrecking Ball,”which were released in 2008. With the release of their latest album “Inside” in 2021, Mother Mother began touring internationally to commemorate both their new and old fan favorites.

Mother Mother’s sound is adored for its uniquely theatrical quality, and their live performance successfully capitalized on it. The set opened with a mysterious visualization of the opening track on “Inside,” called “Seven.” Enveloped in darkness, blue light broke through the smoke that crawled across the stage as the song built eerily. Lead singers Jasmin Parkin, and Ryan and Molly Guldemond slowly entered the stage while they sang the songs’ mystic vocals. The scene satisfyingly captured the song, and set the mood for the show to come.

A deep beat pounded through the dreaminess of “Seven,” amping up the energy until the song transformed into the beloved “O My Heart.” The transition was clever and compelling — a strategy that Mother Mother effectively used between many songs on their set. The energy on stage was overwhelming — the band members seemed to be fighting to make this their best show. In notable Mother Mother fashion, their performance was unconcerned with coolness, driven instead by emotive facial expressions (including acting out the lyrics when possible), confident dancing and head bobbing, and genuine excitement. Although the lyrics of “O My Heart” are tragic — “Oh my heart, it's a black in a rainbow / Oh my heart, it's so damn cold” — the performance felt heartwarming in its delivery

The show was visually stimulating, and the auditory experience was just as impressive. In addition to the set’s smooth transitions, the songs’ synthetic sounds were changed enough to be intriguing, yet not too strong to feel out of place. Guitar and synth solos were added, and Parkin and M. Guldemond had breathtaking vocal moments. These attributes showed through their rendition of “Sick of the Silence,” a single from “Inside.” Above its roaring guitar riff, R. Guldemond looked physically pained as he yelled some of its lyrics, proving that the song’s frustrations were conveyed even more effectively live. It was a definite highlight of the set.

“Who’s seeing us for the first time?” R. Guldemond called out mid-set, receiving the crowd's reply of applause. He responded by announcing: “You’ve given us the opportunity to resurrect some old songs … so we’re gonna take the opportunity to go back in time for a bit.” A crew member switched his electric guitar for an acoustic, and all three singers moved together toward the stage’s center for a more intimate setup. They began with “Wrecking Ball,” a notable fan favorite, as their singing could barely be heard over the audience screaming every lyric. The acoustic guitar added an endearing folk twist, befitting their quirky older sound. The singers physically acted out the “conversation” between the song’s competing voices as M. Guldemond and Parkin sang at each other — one voice sang, “Just break it,” another added, “Just because we can,” then together, “Just, just because, just because, just because.”

Of their older classics, “Hayloft” is one of their most iconic, and their performance (once again) lived up to the song’s theatrics. In heavy red and yellow lighting, R. Guldemond stood on the platform directly above the crowd, and played the opening riff to the song to an immediate uproar of recognition. The guitar was at ear-piercingly loud perfection, and R. Guldemond commanded it confidently, running to each side of the stage to strum dramatically at the crowd mid-song. After his showmanship, the song paused, and quieted for Parkin to wow the crowd with a moving acapella solo, only for it to build up into the verse once more. Yet the band did not stop at the triumphant end to “Hayloft” — R. Guldemond told the crowd that “there’s more to this story,” and a heavy bassline eased them into their newly released song, “Hayloft II.” As if it were the angrier sibling to the original track, its piercing red strobe lights danced to a cavernous beat that vibrated the stage.

The band wound down their set only to come out a minute later for an encore of another revived hit off of their album “O My Heart,” “Burning Pile.” It was an uplifting conclusion, as the singers sang along with the thunderous crowd and encouraged everyone to clap to the beat. “If I catch fire then I'll take my turn / To burn and burn and burn”: This deceivingly depressing tune was representative of the show as a whole. The dark subject matter of Mother Mother’s music was revisited in concert with joyful dramatics and a gratitude for the crowd so palpable they left feeling heartwarmed, even during the frigid trek home.

—Staff writer Chloe M. Becker can be reached at chloe.becker@thecrimson.com.