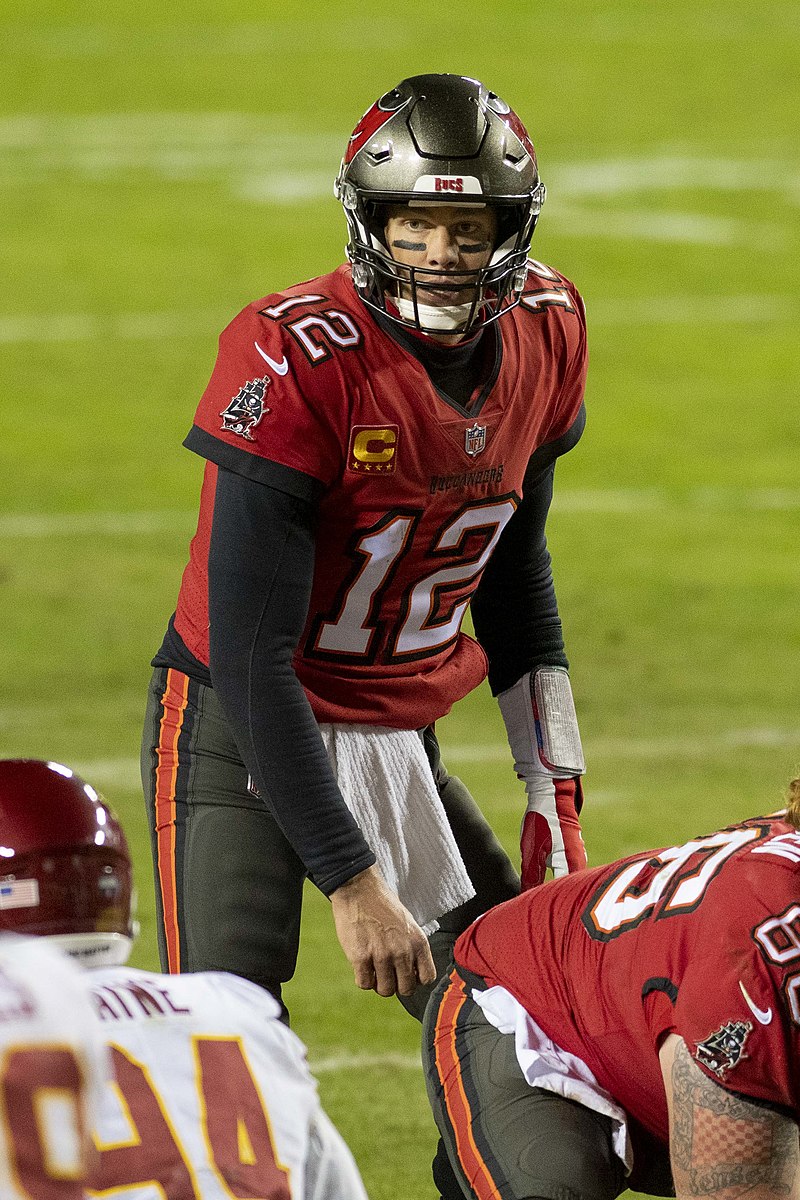 Brady is one of the few players every fanbase in the league can fault for routing their respective teams along a 22-year streak of sheer domination. By Courtesy of All-Pro-Reels
By Charles W. McCormick, Crimson Staff Writer

Breaking news! Her majesty Queen Elizabeth II has officially stepped down from her royal duties after 70 years of statesmanship. Wait, sorry, Boris Johnson just heard her say she was tired and thought this was reason to believe she was ending career. Wait, sorry again — she actually did say she was tired of being the Queen.

This would be crazy, right? Well, believe it or not, this exact scenario actually played out last week with the queen of American athletics, Tom Brady.

Along with his colleague Jeff Darlington, sports news Twitter guru Adam Schefter tweeted last Saturday afternoon that the Tampa Bay Buccaneers quarterback was retiring after losing in the Divisional Round of the NFL Playoffs. Naturally, this announcement sent shockwaves through the NFL world and the world in general. And rightfully so — Brady is one of the few players every fanbase in the league can fault for routing their respective teams along a 22-year streak of sheer domination.

His retirement would have upended the league’s current power dynamic and ushered in a new era of football. Except that Brady himself had said nothing about retiring. Brady’s agent cleared the air that afternoon, stating that the announcement would only be official if it came from the quarterback. Schefter and Darlington’s sources jumped the gun.

Cue the routine despair. Old Man Brady might come back and play in another six Super Bowls until the age of 50 before reconsidering retirement and sparing other teams from hopes lost and dreams deferred. His Majesty was poised to extend His reign.

But alas, the retirement buzz wasn’t totally unfounded. Brady confirmed the rumors in a fateful Instagram post last Tuesday, spurring sports fans around the country to turn to the Internet once more to express both their gratitude and admiration. That many surprised a 44-year-old man wants to stop playing a professional sport based on tackling others as hard as you can is a testament to his talent.

Much of the conversation during this three-day saga revolved around fans’ love-hate relationship with someone who seemed to make NFL dynasties rise and fall at his will, yet it was hard to ignore the unpleasant aftertaste of poor journalism. This episode only adds to Schefter’s growing track record of reporting blunders, which includes a questionable email exchange with a now-disgraced league executive and a false headline about a player involved in a domestic abuse scandal. Such mistakes substantiate broader criticisms of the sports media industry, which can produce provocative and misleading narratives about players with relative ease.

But the real focus of this story is His Highness Tom Brady, Head of the Commonwealth, Defender of the Faith, Mother of Dragons. Part of me really wanted him to play another season just to spite Twitter and its ceaseless speculation — he made it to the NFL before I was even born.

We must face the reality at the bottom of the social media madness: A legend has retired, and he’s left big cleats to fill. This debate has raged on for centuries: Will anyone ever rival Shakespeare’s gift with the pen or da Vinci’s eye for beauty? Perhaps, in time, New England Patriots quarterback Mac Jones will turn his attention from his breath in cold air to throwing the ball and share Brady’s success. After all, since this photo was taken nearly 22 years ago, Brady’s proven that anyone can do anything.

—Staff writer Charles W. McCormick can be reached at charles.mccormick@thecrimson.com.