Oliver Tree Concert Review: For All The Aliens 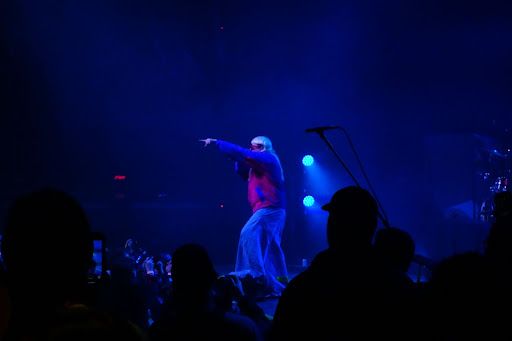 Oliver Tree, a.k.a. “Alien Boy,” transported fans to his planet inside Boston’s House of Blues on March 11. The attendees, lined up outside the sold-out venue’s red fluorescent signs, wrapped all corners of the block. Their outfits, complete with painted jean jackets, cowboy hats, fur coats with flame motifs, brightly bleached hair, and all kinds of stripes and squiggles, were a fitting introduction to the eccentricity of Oliver Tree.

The packed House of Blues audience welcomed the musician with dim lighting and homey decor. Most attendees were leveled on the floor facing the changing colors of the stage, or standing above it on one of the two balconies, before anyone got on stage. Even then, the crowd’s excitement, expressed through chatter and chanting, was unmistakable.

25-year-old alternative artist Sueco was the concert’s first opener. With his drummer to his right and his smiley tattooed guitarist to his left, the artist stood in front of a neon red sign reading “Sueco” dressed in a striped long sleeve. As soon as he sang his drum heavy hit “It Was Fun While it Lasted” with the shadows of waving hands under blue lighting, the edgy tone of the concert was set. He demanded that everyone rock out with him, threw out merch, and crowd surfed. He even smashed his electric guitar: “Imma throw this out to one of you after the show just so nobody gets hurt right now.” But Sueco truly let the audience know they were in for an interactive ride when he called out for a drummer in the crowd.

The concert’s second opener, 18-year-old Ontario native 347aidan, added a youthful sound to the venue's atmosphere. He passionately sang “Cigarettes and Adderall” before sharing that it was his first tour performance. The new artist proudly sang hits like “Memories” and audience favorite, “Dancing in My Room.”

Oliver Tree welcomed an anticipatory crowd wearing his classic pink and purple windbreaker, oversized blue pants, pink cat eye sunglasses, and blonde half bowl cut. After ending his first song with a dab, he yelled “Let’s make this a night we’ll never forget!” As he stood in front of a backdrop of a barn on fire, Tree dedicated his next song, “Alien Boy,” to “all the alien boys and the alien girls.” He circled the stage doing silly dance moves under iridescent lighting while the crowd chanted the lyrics word for word. After performing two songs, Tree said, “Thank you, goodnight,” introducing the audience to the first skit of the night. He complained that there was no time for another song, and said he was told that the crowd did not want to hear more. The artist's shameless personality and sense of humor was a refreshing complement to his alternative and indie pop sounds.

This concert was perfectly in line with the aesthetics of Oliver Tree’s new album “Cowboy Tears,” which incorporates country elements into his already dynamic and catchy sound. With songs like “Cowboys Don’t Cry,” the artist’s latest release maintains the unconventional lyrics, intricate guitar melodies, and distorted sounds that made Tree an indie chart-topper in the past. His affinity for all things out of the ordinary was clear, and proudly embraced by the crowd. Tree did not hold back. He screamed, “I am a human and I am allowed to grow and evolve and change. I’m taking this stupid ass outfit off,” before stripping to reveal a white and blue tracksuit. While a clone wearing his previous outfit walked on stage to pick it up. He roused the weed smokers in the audience, then jokingly told security to find them. The roaring crowd pumped their hands emphatically under bright red lighting, waiting to see what Oliver Tree would do next. His performance of “All That,” including a fierce death drop and head shaking, certainly gifted fans with the escape they came looking for.

The crowd jumped eagerly during his performance of the raucous hit “Fuck.” But the House of Blues shook most when Tree and his friend, artist “Little Ricky ZR3,” performed unreleased music from their upcoming mixtape. The new songs were well received, and so was the fake cow Tree proceeded to ride during his next, much slower jam. For fans, Tree’s performance was a must see.

—Staff writer Aissatou B. Diallo can be reached at aissatou.diallo@thecrimson.com.