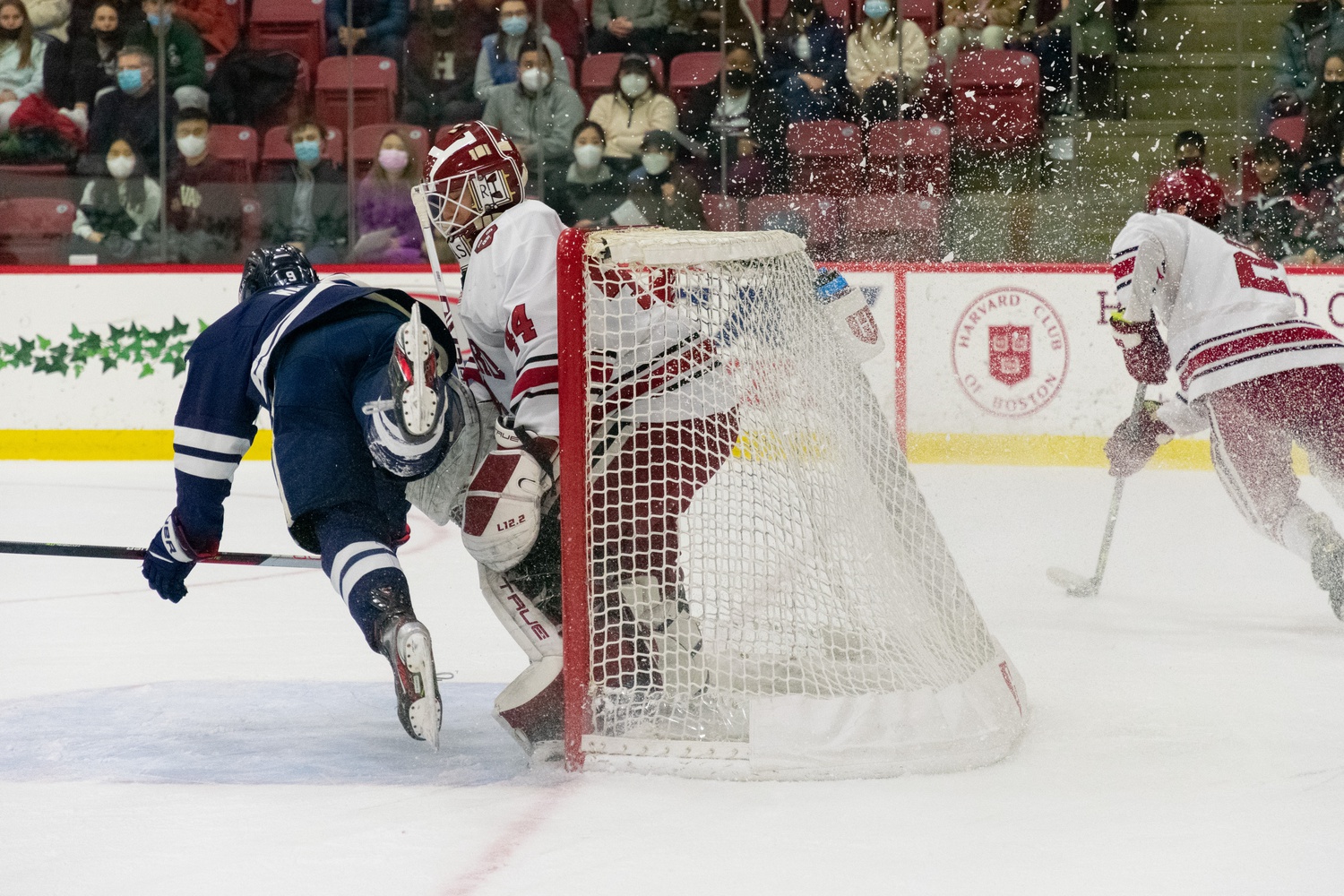 Junior goaltender Mitchell Gibson engages in a physical battle in front of the net with a Yale attacker in a 2-0 victory over the Bulldogs on Feb. 11. Gibson's heroics helped Harvard emerge with an ECAC Championship and NCAA Tournament bid. By Julian J. Giordano
By Bridget T. Sands and Aaron B. Shuchman, Crimson Staff Writers

Mere days after upsetting No. 6 Quinnipiac in the ECAC Tournament championship game, the Harvard men’s ice hockey team is set to take on an even tougher challenge in the Albany Regional’s No. 1 seed Minnesota State Mavericks. The game will be played at 12 pm on March 24 at MVP Arena in Albany, N.Y, and it will be the first-ever meeting between the two programs.

“We have a really talented team. We can get up and down the ice with anybody,” claimed head coach Ted Donato ’91. “We have some really good players that can play against anybody, they've shown that on the world stage…We're not going in thinking that we have to pull a rabbit out of our hands. We're gonna go in and put our best game forward and go in and try to earn a victory.”

“It started even before this weekend- the resiliency of this group and the calmness under pressure when we do go down a goal or something happens that isn't in our favor and we kind of have to fight through that to get a few more goals than we thought we needed,” added senior forward and captain Casey Dornbach. “This has been the tightest knit group and the best group that I’ve been a part of since being here at Harvard. We have a lot of guys that want to get better, that want to do something special.”

The Mavericks, members of the Central Collegiate Hockey Association (CCHA), spent the majority of the regular season on top of the NCAA rankings before being supplanted by the Michigan Wolverines in the NCAA tournament seeding. After finishing the regular season with a 35-5-0 record, Minnesota State defeated the St. Thomas Tommies, the Northern Michigan Wildcats, and then the Bemidji State Beavers to win the Mason Cup, the CCHA’s postseason championship. The Mavericks are elite on both ends of the ice, ranking second in the nation with 4.17 goals per game and 1.27 goals-against per game.

Leading the Mavericks on the ice are forward Nathan Smith and goaltender Dryden McKay, both finalists for the 2022 Hobey Baker Award, which is given to the top player in college hockey. Smith, a prospect for the National Hockey League (NHL)’s Arizona Coyotes, has recorded 49 points (18 goals, 31 assists) in 34 games played this season, which is second in the country behind University of Denver forward Bobby Brink. McKay, a two-time All-American and previous Hobey Baker finalist, has recorded a 1.27 goals-against average and .934 save percentage, both of which are in the top five nationally.

Despite playing in the CCHA, a weaker conference where only two other teams had winning records, the Mavericks recorded several wins against top competition, defeating then-No.1 ranked University of Massachusetts-Amherst in October, while splitting a series with then-No.2 ranked St. Cloud State later that month. Minnesota State also defeated then-No. 10 Providence before losing to then-No.3 Michigan.

“We know they’re an older team and they [have] a lot of offense too so we’re going to have to be firing on all cylinders,” Minnesota native Dornbach claimed. “Being that it's a team from Minnesota, [I] kind of know a little bit about some of their players, they got some good players, but we do too and I think it will be a great matchup.”

The Crimson enter the NCAA tournament on a 12-2-2 run, which began with a late January road trip to Colgate and Cornell in upstate New York. Despite finishing in a disappointing tie for third place at the 2022 Beanpot Tournament, Harvard went on a strong run through the ECAC tournament, defeating RPI two games to one in a dramatic series before beating Clarkson 5-3 in the semifinals and upsetting Quinnipiac 3-2 in overtime in the championship. The 2022 tournament is the Crimson’s seventh appearance under the leadership of Donato, who has coached the team since the 2004-2005 season.

Leading the Crimson in scoring is first-year forward Matthew Coronato, a prospect of the Calgary Flames and a member of Team USA at the 2021 World Junior Championships, who has recorded 35 points (18 goals, 17 assists) in his first season in Cambridge. Coronato also scored the game-winning goal in overtime to defeat Quinnipiac in the ECAC Tournament championship game on Saturday night. Right behind Coronato in scoring are junior forward and captain Nick Abruzzese, a Toronto Maple Leafs prospect and U.S. Olympian, who has recorded 32 points (9 goals, 23 assists), and junior defenseman Henry Thrun, an Anaheim Ducks prospect who has tallied 32 points (7 goals, 25 assists) this season.

In net, Harvard is backstopped by junior goaltender Mitchell Gibson, who has recorded a 2.10 goals-against average and a .919 save percentage this season. Gibson was particularly strong in the ECAC championship, making a career-high 47 saves on 49 shots to keep the Crimson alive in a game where they were outshot 49-17.

“Mitch is an amazing goalie who is only getting better. He’s heating up and had some huge games for us, this weekend being huge for him and huge for us,” reflected Dornbach on Gibson’s championship-winning performance. “We’re gonna need him back there and we have full trust in him to do just that.”

As a team, Harvard averages 3.32 goals per game while allowing 2.29, both of which are 11th in the country.

“We certainly recognize that we [have] some real talent, we [have] some real character, and we [have] really good players…Quite frankly, we just haven't played that many games together as a group, not only kind of in entirety, but even specifically just, you know, this year,” Donato said. “We had, I think, 17 guys go through Covid in like a three week period…We still have our best hockey ahead of us, and I think we're starting to hit that stride. We find ways to win.”

The game will be streamed on ESPNU at noon on Thursday. Updates will also be posted on Twitter by @THCSports, as well as the team’s account @HarvardMHockey.