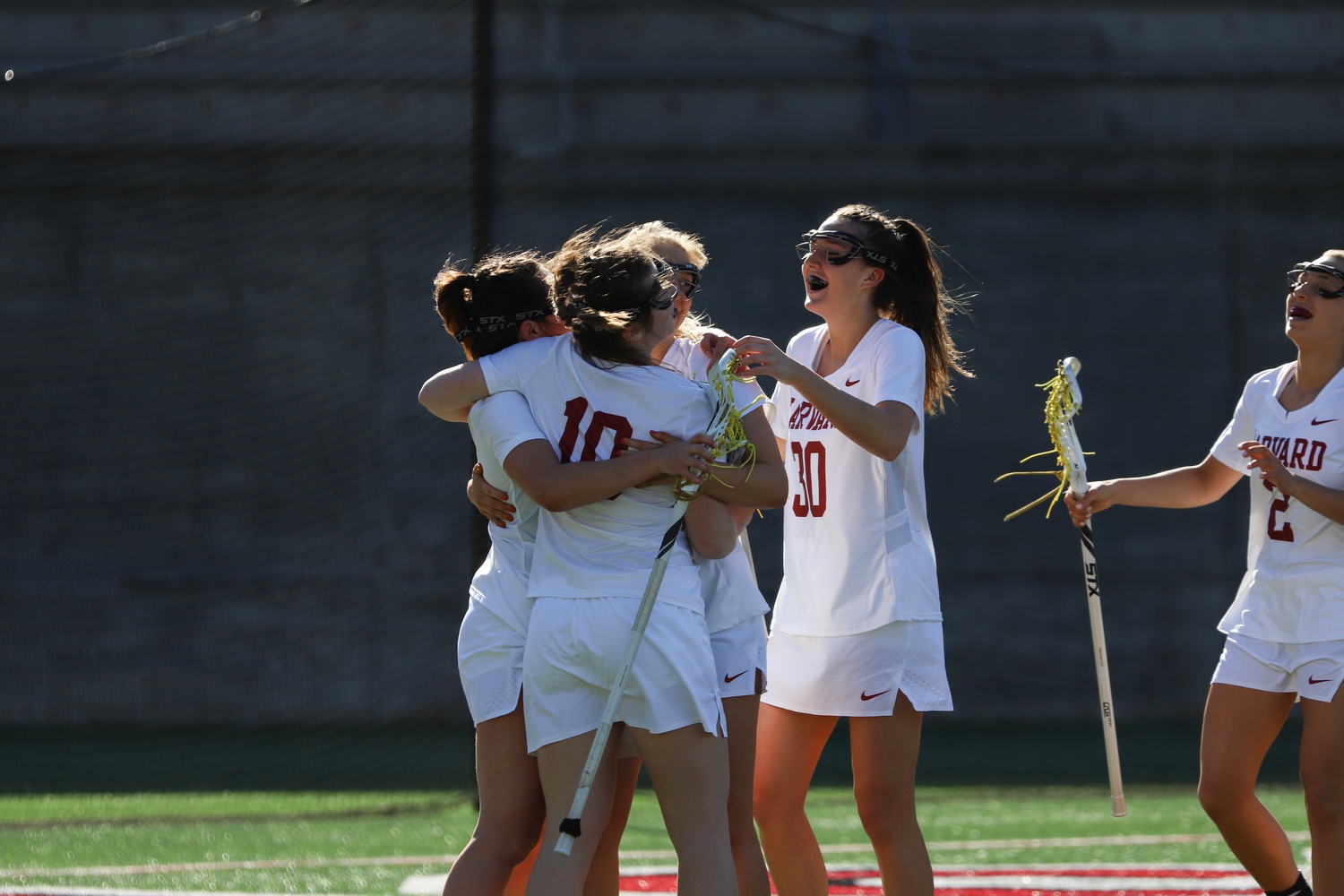 The Crimson celebrate after a goal during a 15-14 loss to Columbia on April 6, 2019. Three years later, Harvard exacted revenge with a 14-8 victory in New York City. By Quinn G. Perini
By Ben Morris, Crimson Staff Writer

After a rough past couple of games, the women’s lacrosse team got back on track over the weekend. The Crimson (5-6, 3-2 Ivy League) traveled to the Big Apple for a Saturday afternoon showdown with the Columbia Lions (2-10, 0-4 Ivy League). Despite the score being knotted at six apiece halfway through the contest, Harvard came out firing on all cylinders in the second half, outscoring the Lions 8-2, with streaks of three and five straight unanswered goals.

This was an important win for the Crimson, not only because the team demonstrated that it can play as well as anyone once things start clicking, but also because the victory allowed Harvard to attain fourth place in the Ivy League as the season enters its final stretch.

Currently, Yale (9-2, 5-0 Ivy League) sits atop the conference, with No. 12 Princeton (8-3, 3-0 Ivy League) sitting just behind the Bulldogs. The team separating the Crimson from the top two is Cornell (7-6, 3-2 Ivy League). Although Harvard and the Big Red share identical conference records, Cornell owns the head-to-head matchup, just narrowly sneaking out of Cambridge with a 10-9 victory that took two overtimes to cement.

Additionally, had Harvard dropped this matchup against Columbia, it would have allowed Brown (5-7, 2-3 Ivy League) – the Crimson’s final regular season opponent this season – to share control over fourth place in the Ivy League.

This was also a much needed win for Harvard since, despite picking up an 11-7 win over Dartmouth (3-8, 1-4 Ivy League) a week after the double-overtime thriller against Cornell, the Crimson suffered another bout of crushing defeats.

The team first traveled to New Haven to take on the top-seeded Bulldogs in a marquee matchup. Although Harvard fought til the very end, Yale held on just enough, coming away with a 13-12 win in the rivalry game.

The following weekend, the Crimson hosted one of the top teams in the nation, No. 2 Boston College (13-2, 5-2 ACC). Having ample experience in a powerhouse conference, the local foe came out firing with power and never took its foot off the gas pedal. By the time the clock struck zeros, the Eagles found themselves emerging from the game with a 17-1 win.

Given the recent string of tough opponents and nail-biting finishes that just have not gone Harvard’s way, the Crimson arrived in New York City searching for a much-needed victory.

As the match began, Harvard jumped out to a quick start and found itself up 4-0 just under 10 minutes in, with the team eager to get back out on the field and prove itself after the last few games. Although the Lions were able to score two goals of their own, senior attacker Charlotte Clark was able to outduel the Lion goalie and squeezed in one last goal with a single second left in the first quarter.

Entering the second frame, Harvard found itself with a solid 5-2 advantage. However, the Lions were determined not to go down without a fight. Mirroring the way the Crimson opened the game, Columbia came out hot in the second quarter, scoring three straight in less than five minutes. With the score now even, the two teams battled for the remainder of the half, each able to put up another goal before the match entered its midway point.

As the teams came out for the third quarter, it was clear that Harvard had a resurgence of energy. Although the Lions were able to keep pace for a bit of time, the 6-6 tie was eventually snapped when the Crimson ripped off three straight goals. Two of these three were scored by sophomore midfielder Callie Hem – the team leader in goals scored (26) and in total points (34).

Although Columbia was able to notch one more goal with two minutes left in the quarter, which brought the score to a relatively close margin at 9-7, it was clear that there had been a significant momentum shift in Harvard’s favor.

This became abundantly clear at the onset of the final frame. Once again, the Crimson came out blazing, but also made sure to not leave the door open for the Lions to make a potential comeback. For the third time this game, Harvard put together an unanswered streak of goals, although this one happened to be the largest of the match at five (three of which came in the first five minutes), doubling the Lions’ total and stretching its lead to 14-7.

Before the final buzzer sounded, Columbia was able to score one last goal, but the Crimson still remained comfortably in control.

As Harvard left New York City, the team returned to Cambridge with an impressive 14-8 victory, but, perhaps more importantly, the Crimson came home with a renewed sense of confidence.

The team is going to need to carry this momentum into its final stretch of the regular season, which includes three games in a week’s time, all at home. Harvard will first take on No. 12 Princeton (8-3, 3-0 Ivy League), another top-seeded opponent, this Saturday. Following this matchup, the Crimson has a three-day turnaround before Boston University (1-13, 0-7 Patriot League) travels across the Charles River for a Tuesday night competition. Finally, Harvard wraps up its regular season play with what is shaping up to be a vital game against Brown. Since the Bears are the team slated only slightly behind Harvard in the standings, it is likely that they will come out with everything they have, clawing for the fourth spot in the Ivy League.

There is a high probability that these final games will determine whether or not the Crimson will get to experience postseason play, meaning that Harvard will need to play hard and smart at every junction, no matter if the opponent is highly ranked, such as Princeton, or struggling to accumulate wins, such as Boston University.

Thus far in the season, the Crimson has proven that they can play with the best in the Ivy League, having lost by only one goal a piece to both top-seeded Yale and third-seeded Cornell.

As Harvard enters this final stretch, the team is going to need to build on its win against Columbia; with three games to go, the Crimson controls its own postseason fate.

–Staff writer Ben Morris can be reached at benjamin.morris@thecrimson.com.