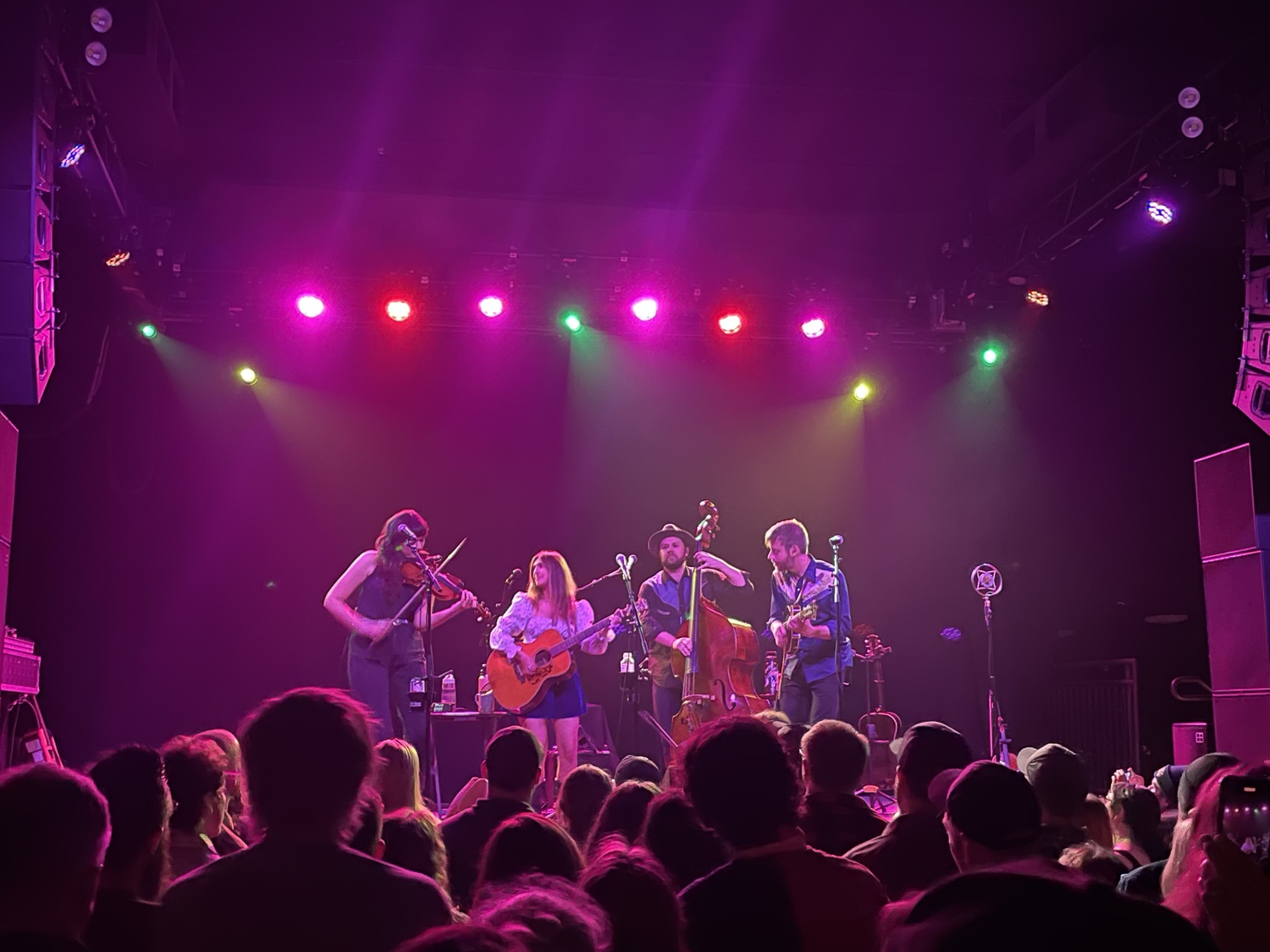 If one were to blend the expressive vocalizing of Tammy Wynette with the gravelly cadence of Dolly Parton, the resulting sound might resemble something like that of singer-songwriter Sierra Ferrell. As part of her “Long Time Coming Tour,” Ferrell gave a stunning performance on Saturday, April 15 at the Sinclair to a crowd of perhaps the highest concentration of plaid, beards, cowboy hats, and overalls in recent Cambridge history. She was joined by Josie Toney (fiddle), Joshua Rilko (mandolin), and Geoff Saunders (bass) for an evening of genre-bending music and animated performances.

Ferrell and her entourage opened with a lively rendition of one of her most popular songs, 2021’s “In Dreams,” incorporating the fiddle into a song often played more slowly and with only guitar. Though opening with one of her most well-loved songs might have seemed like an initially risky move, the concert only improved from there as Ferrell was able to capture the crowd’s attention and energy with songs from across her repertoire — some not yet released.

After upbeat renditions of “Give It Time” and “The Bells in Every Chapel” from her “Long Time Coming” album, Ferrell slowed it down with “Whispering Waltz.” She was accompanied instrumentally by Toney and, bathed in somber blue stage lights, the two artists created a striking harmony between Ferrell’s vocalizing and Toney’s wailing fiddle that at times seemed to mirror the same rich complexities of the human voice. “We brought it up, so now we gotta bring it down,” Ferrell said.

Ferrell’s Parton-esque voice is as unique as her category-defying music, pulling from honky-tonk country, folk, jazz, and even genres of Latin music like tango. From wistful waltzes to jazz-infused country, Ferrell demonstrated her ability to move gracefully across genres. In slower songs, listeners found beauty in her rich vocals and layered harmonies with other members of the band; in faster songs, the allure was in the speed of the artists' fingerwork, the instrumental solos dispersed throughout, and the passion that radiated off the stage.

While Ferrell embodied a commanding presence vocally, Toney, Rilko, and Saunders gave impressive instrumental solos throughout the evening. Perhaps one of the most compelling moments of the concert occurred when the band played “The Snakes Crawl at Night,” a classic country tune written by Charlie Pride, though notably not on any of Ferrell’s albums. Despite the song’s Southern origins, the band imbued it with elements of jazz and Latin melodies to create a lively melting pot of music. The quartet gave one of their most animated performances of the night, complete with stirring solos from each artist — both instrumental and vocal — and the invocation of hissing snakes throughout. The crowd responded with fervor and mirrored the energy of the band, dancing, singing, and hissing along.

Soon after, the band left Ferrell on stage to perform a few solos accompanied by her guitar. She started with “The Garden” and later “Before I Met You” (another “Pride” song) before the three other members of the band returned. Ferrell's solos provided a breath of fresh air and a chance for listeners to hear the strength, complexity, and richness of her voice unaccompanied by backup vocals or instruments. In these moments, it was clear that while the band as a whole was incredibly talented, its strength was derived from Ferrell's vocals. It seems that this sentiment is shared by others in her fan base; while a studio-recorded version of “In Dreams” with Ferrell and a band has been played a little over two million times on Spotify, a video of Ferrell singing the same song accompanied only by two acoustic guitars has been viewed almost six million times on YouTube.

As the evening came to an end, Ferrell appeared delighted by the energy of the crowd, saying, “Can we just message my manager and my booker and say, ‘Listen … Sierra’s gonna stay in Boston for one more week.’” The crowd wasn’t quite yet willing to part from the singer either. After Ferrell attempted to close the concert with a final rendition of “Jeremiah,” chants of “one more song” rang through The Sinclair.

While heavy rain fell outside on a dreary Cambridge night, inside the confines of 52 Church Street, listeners were graced by a talented band, an eclectic amalgamation of genres, and the voice of a prolific artist.