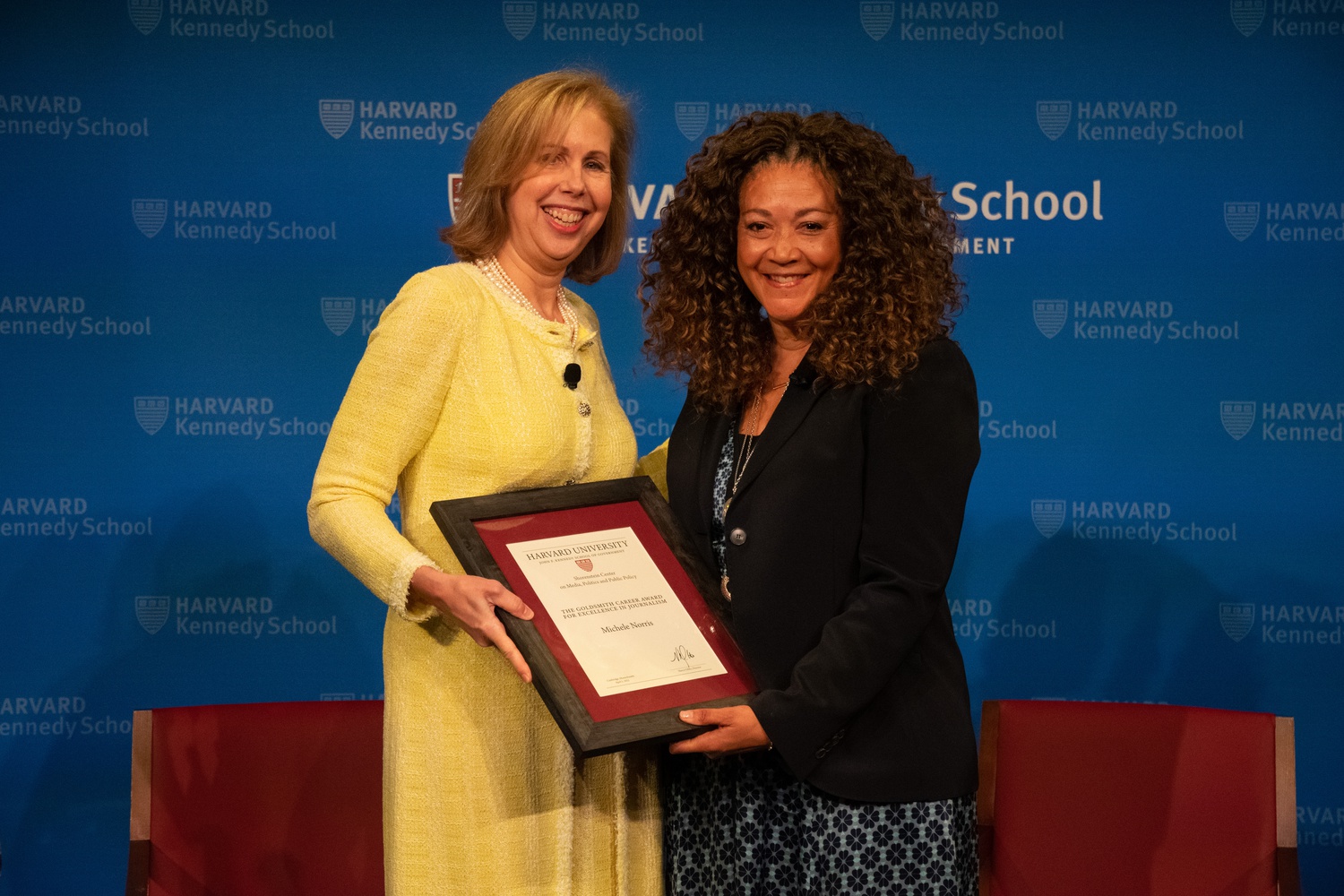 Washington Post columnist Michele L. Norris was awarded the 2022 Goldsmith Career Award for Excellence in Journalism at an event hosted Tuesday by Harvard’s Shorenstein Center and the Harvard Institute of Politics.

Norris, a former host of NPR’s “All Things Considered,” discussed her career, the role of race in reporting, and the future of journalism in a 45-minute conversation with the Shorenstein Center’s director, Nancy R. Gibbs.

At the event, the Shorenstein Center also awarded the Goldsmith Prize for Investigative Reporting to Washington Post reporters Hannah Dreier and Andrew B. Tran for their coverage of climate refugees and the inequity in FEMA’s disaster response.

“The process of reporting these stories was often pretty wrenching and pretty lonely,” Dreier said, noting that few journalists had focused their investigative efforts on FEMA’s aid distribution.

The pair received $25,000 for the award, which honors work that “promotes more effective and ethical conduct” in government. The five finalists — including reporters for ProPublica, the Milwaukee Journal Sentinel, the Wichita Eagle, and the Nashville NPR affiliate WPLN — received $10,000 each.

Goldsmith Book Prizes were awarded to Karen Mossberger, Caroline J. Tolbert, and Scott J. LaCombe, who co-authored the book “Choosing the Future: Technology and Opportunity in Communities” and to Elizabeth H. Becker for her book “You Don’t Belong Here: How Three Women Rewrote the Story of War.”

In discussion with Gibbs, Norris reflected on her career in journalism, which has spanned nearly 40 years.

“I have been told something time and time again — the best of journalism is behind us — and I have refused to believe that that’s true,” Norris said.

Norris also discussed her role in spearheading the Race Card Project, an initiative she founded to inspire conversations about race. The project, which has received over 500,000 submissions, asks people to submit a response capturing their experience with race in America in six words or less.

Norris said she has been surprised by the number of submissions and the diverse array of experiences and racial backgrounds covered in the project.

“One of the many things I have learned is that, when it comes to race, the story we tell is often incomplete,” Norris said. “We write about conflict, but not what is behind that conflict.”

Anjuli R. K. Shere, a Shorenstein Center fellow who attended the event, said she was “interested to hear the perspective” of the award winners.

“The future of journalism is probably individuals because of the crisis within news organizations — the mass layoffs that have happened during the pandemic,” she said. “Just individuals going out and finding stories themselves.”