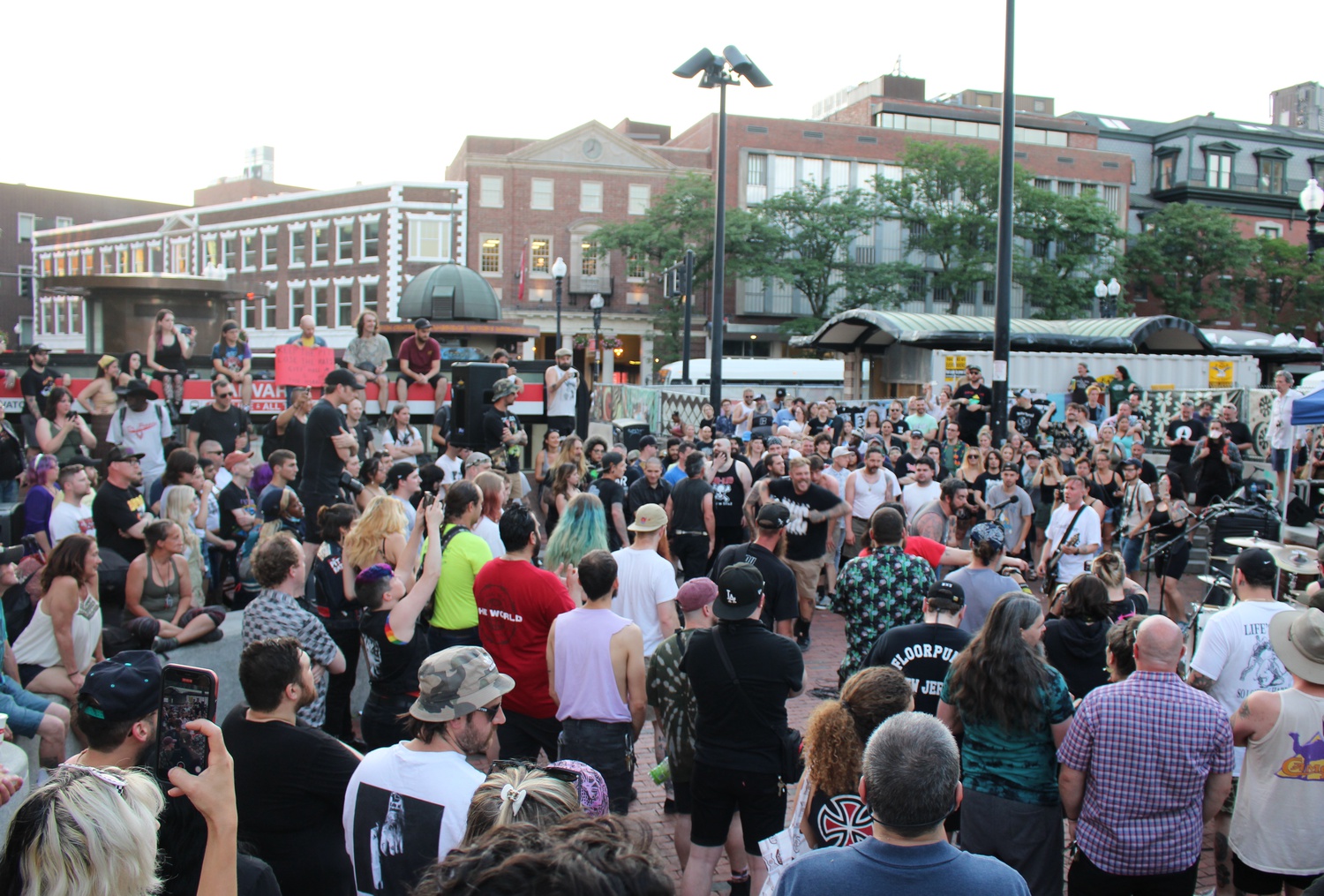 Harvard Square’s Pit — the slightly submerged area located behind the T station entrance — is set to be demolished in July, but for one last time on Saturday, it was transformed into a circle pit.

Pit-A-Palooza, hosted by the City of Cambridge and the Harvard Square Business Association, was not your traditional celebration of life service. A live hardcore rock band blasted the ears of passersby. Leather-clad attendees moshed to the music, pushing and shoving each other. Older self-proclaimed punks stood to the side, demanding the return of marijuana joints to their rightful owners. The smell of spilled beer and second-hand smoke filled the air.

The Pit, built in 1982, quickly became an iconic gathering spot in the ’80s and ’90s for kids who were into “skateboarding, punk rock, hip hop, whatever,” according to Ryan Murphy, who said he used to hang out there.

Adam DuPaul, who also frequented the Pit, said it was a place where like-minded teenagers could find each other before cell phones existed.

“Phones were on the wall — and I didn’t have one,” DuPaul said. “So I’d come down here, not a penny in my pocket, no ID, nothing, and hang out for three, four weeks sometimes.”

Kevin Benoit, who attended Pit-A-Palooza, described the Pit as a “safe haven for a lot of people,” including many runaway youths.

Benoit said he has run into old friends from the Pit over the years, including one person who — at the age of 13 — spoke to him about smoking crack.

“I told him it was a bad idea, it’s not good for you,” Benoit recalled. “He listened because I was one of the people here, so he never touched it.” 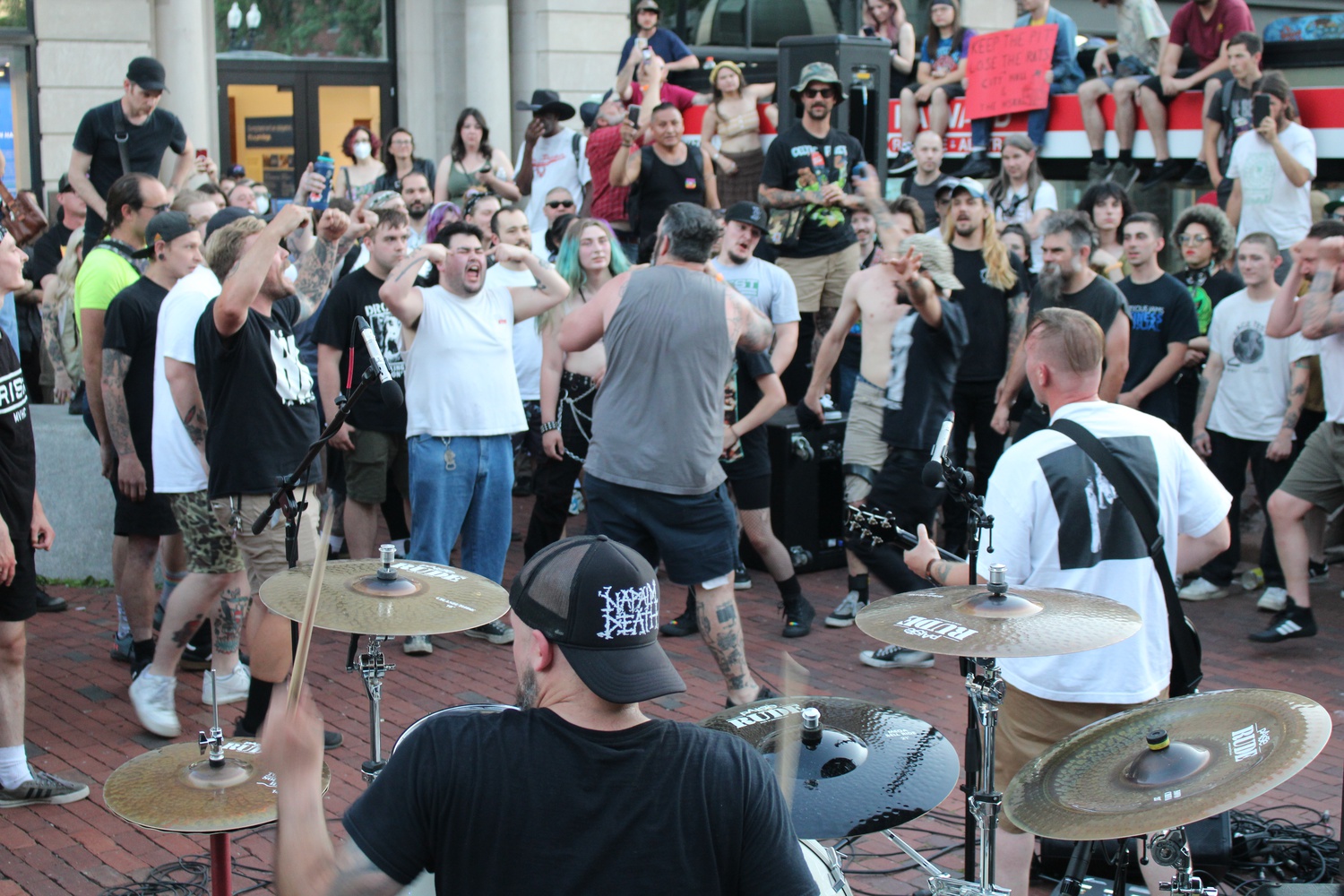 Pit-A-Palooza attendees celebrated the history of the Harvard Square Pit with live music on Saturday. By Miles J. Herszenhorn
Advertisement

In a policy order, members of the Cambridge City Council acknowledged that the Pit could also have a “dark side.”

“In addition to the positive, energized community of The Pit, not all was perfect, and some were victims of violence, substances and sexual assault,” the policy order stated. “Their experiences are the dark side of this otherwise positive experience, and we must honor their pain.

The Pit made headlines in 2001 after Io Nachtwey, a 22-year-old homeless woman, was murdered in the Square by members of a Boston gang. Regular visitors of the Pit knew Nachtwey as a fellow “Pit Kid” who went by the nickname “Rook.”

Dave Unger, who attended the event, reminisced about the time he spent in the Pit during his teenage years.

“I bought some acid from some punk chick here — my first hit of acid ever,” Unger said.

But other veterans of the Pit warned it was also a place where some people got scammed. DuPaul said that on occasion he would sell grass clippings for $400 an ounce to people who came looking to buy drugs.

“I knew that Harvard Yard had mowed their lawn that morning or the day before, so you go to the lawn and you get the clippings,” DuPaul said. “And sometimes they would come back for seconds — because of the pesticides, I’m thinking.”

Cambridge City Councilor Marc C. McGovern compared it to a watering hole frequented by different types of animals in “the savanna in Africa.”

“Under normal circumstances they would all kill each other, but out of necessity they all come together to this watering hole and get along while they drink,” McGovern said. “That was kind of what the Pit was.”

But Harvard Square’s Pit will soon be demolished and turned into a plaza, in part, because of non-compliance issues with the Americans with Disabilities Act, according to McGovern.

“It’s also in rough shape, and there was a desire to renovate it and bring it back to a condition that it can still be a useful place for people,” McGovern added.

But some people at Pit-A-Palooza did not want to see the Pit remodeled.

Ben Simon, a Cambridge resident who attended the event with a sign protesting the demolition, said he does not believe the “real motivation” for demolishing the Pit is to improve accessibility in the Square.

“They want to make it something that caters to tourists and gentrifiers,” Simon said. “They want to get the homeless people out, the freakish punks that used to hang out here out.”

“They want to want to make it a spot that people will feel comfortable getting a fucking Frappuccino and spending their afternoon,” he added. 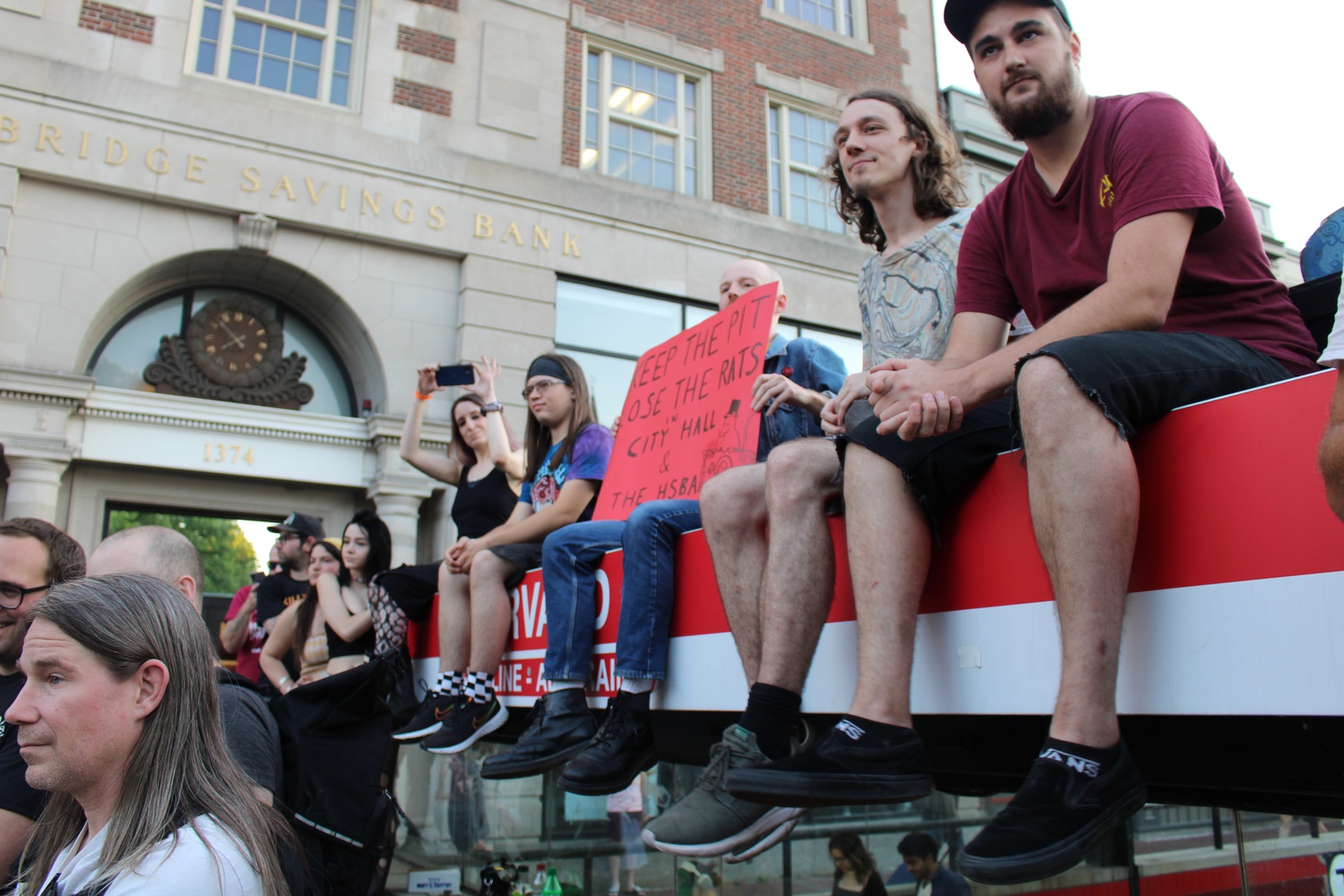 Harvard Square's Pit is scheduled for demolition in July. By Miles J. Herszenhorn

Others were more indifferent to the remodeling.

Pete Dutro, who spent time at the Pit as a teenager, said that “they killed the vibe a long time ago.”

Stephen Helfer, a local resident who attended the event, said the Pit did not leave a strong impression on him.

“I had completely forgotten about the Pit,” Helfer said.

McGovern said the people protesting the Pit’s demolition are not truly committed to it.

“A lot of the folks who are complaining about it — quite honestly — I haven’t seen their faces around here in 20 years,” he said. “They’re reminiscing about something that they don’t even come and support anymore.”

But for some, like Amy Lake, the Pit played an unforgettable role in their lives. Lake was first introduced to her husband at the Pit, with whom she has been together ever since.

When asked if meeting her husband was her fondest memory from the Pit, Lake hesitated.

“That’s my clearest,” she said.