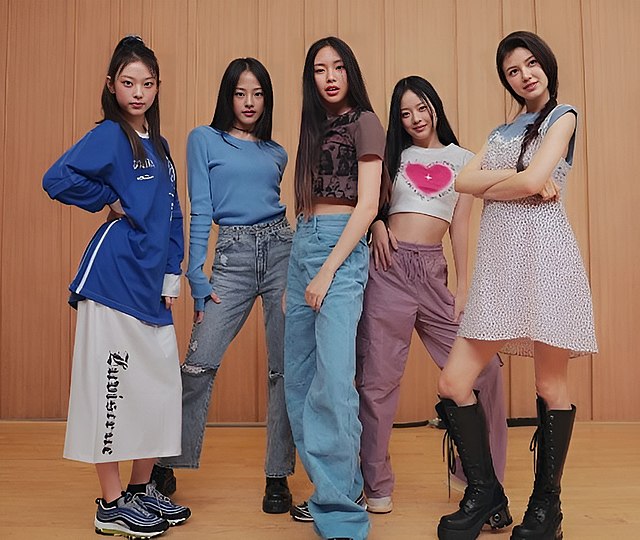 On July 22, K-pop group NewJeans surprise released their debut single “Attention,” a glittery and Y2K-inspired mix of R&B and pop. The group consists of five members and was born out of a 2019 global audition hailing from ADOR, an independent label under HYBE. Prior to their debut, NewJeans remained a mystery to fans: “Attention” was dropped as a stand-alone piece without a teaser or any information about the group, even the members’ names. Perhaps the strategic silence is what propelled them to attention. NewJeans topped domestic charts and made a debut on Billboard Global within nine days of its release.

Authenticity and effortlessness are at the core of “Attention” and NewJeans’s broader artistic identity. The track begins with echoes of chants and claps, setting a rhythmic motif that underlies the rest of the piece. The opening sequence is joined by a rhythmic layer of syncopated beats, which emerges with an effervescent shimmer. Following a whispered countdown, Hyein’s voice enters the mix. While multilayered, the instrumentation is simple and does not overshadow the vocals. Rather, the syncopation brings out the natural fluctuations of the vocal line, emphasizing its freestyle-like and conversational tone.

The heart-on-your-sleeve lyrics reinforce the authenticity of the voices. “You got me looking for attention . . . One thing’s for sure, I know you’re the one,” the members sing in a bold confession. The vocal line in the chorus is especially simple, each member pursuing a clear and airy falsetto in a solo that they pass around. Their tone is pure, straight, and natural with moments of playful vocal dips that add a whimsical touch. Sincerity and confidence shine through both the lyrics and voices that deliver them, which are enhanced by nostalgic synths in the background.

Deeply Y2K-inspired, the musical and visual direction of NewJeans fall in line with “newtro,” or new retro, a trend in South Korea that recalls the past with a contemporary twist. Considering that the age of the members ranges from 14 to 18, the past they are musically citing is before their time. The group reimagines nostalgia for the past they have never lived through ’90s sounds and visual hallmarks like arm warmers, butterfly clips, and arcades.

Min Hee-jin, the head producer and creative director of NewJeans, explained the idea of timelessness that the group pursues: “Just as jeans have withstood the test of time and found popularity among many regardless of their age and gender, NewJeans aspires to become an icon of generations — one you never grow tiresome of putting on.” With “Attention,” NewJeans promises to rediscover and reclaim the past as well as recast it in modern ways.

—Staff writer Bella Kim can be reached at bella.kim@thecrimson.com.