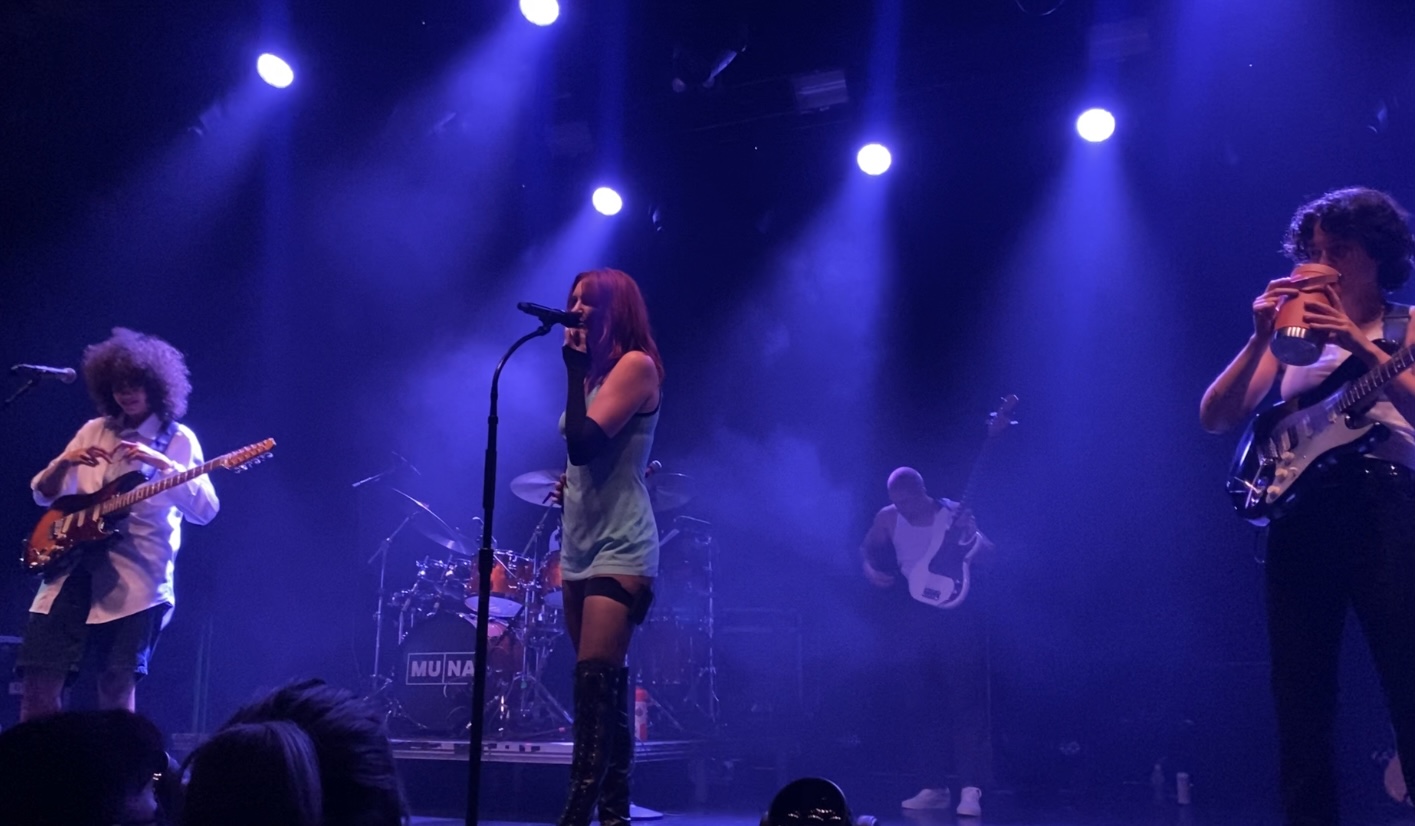 MUNA kicked off their Fall 2022 tour with two show's at the Royale in Boston on Sept. 18 and 19. By Courtesy of Sofia Andrade
By Sofia Andrade, Crimson Staff Writer

MUNA is the greatest band in the world. At least that’s what the band — an acclaimed indie pop three-piece hailing from Los Angeles — wants you to think. It’s evident with their larger-than-life confidence (ironic or not), their unapologetically effervescent songs, and their relentless commitment to creating and performing. With their current fall tour well on the way after a kickoff show in Boston on Sept. 18, they’re sure to convince you of their stardom.

Made up of members Katie Gavin, Josette Maskin, and Naomi McPherson, MUNA has been the go-to band for electro-pop bangers since 2017, though they’ve been around for much longer. Their debut studio album “About U” under RCA Records pushes listeners to the deepest depths of their inner psyche and back again. Bellied by brutally honest lyrics and kaleidoscopic production, it explores love and heartbreak in tracks like “Everything” and “Winterbreak,” yet it also posits an alternative: a “place” where one can go to escape the difficulties of the world, even if just for a second. “I know a place where you don't need protection / “Even if it’s only in my imagination,” Gavin sings on the album’s debut single, one of the first songs she, Maskin, and McPherson wrote together.

In many ways, “I Know a Place” continues to be the band’s mantra. Its themes are present across MUNA’s discography, including the iconic “Saves the World” and a new self-titled record that meets and exceeds expectations for the queer icons. The call to action in the track brings with it an energy that drives MUNA’s concerts and engulfs them in an unmistakable air of community. MUNA shows are a place to let go, to dance and to sing, and to envision brighter, more loving alternatives to what life could be. Their performances are, to quote Gavin at the end of their Sept. 20 show in Washington, D.C., a "queerful joy revolution." 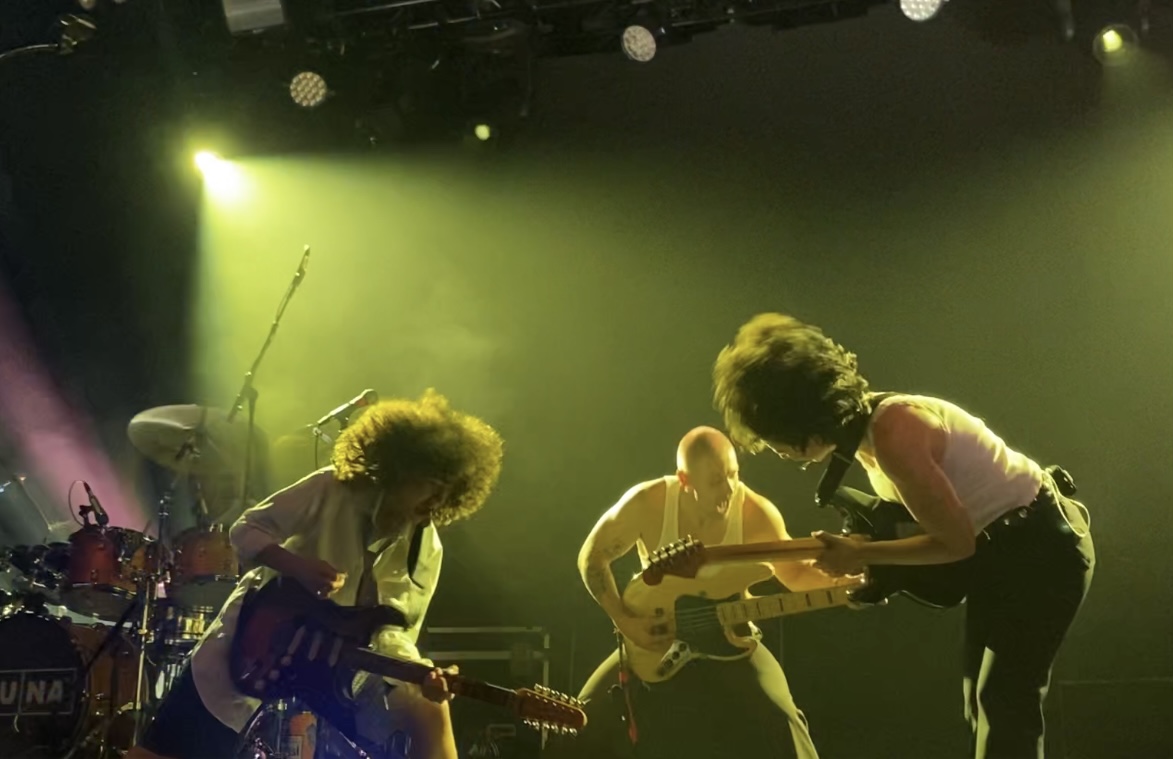 Naomi McPherson, bassist Geo Botelho, and Josette Maskin rock out on the Royale stage. By Courtesy of Sofia Andrade

Sunday’s sold-out Boston show at the Royale was no different. With the help of openers Meet Me at the Altar, a refreshingly fiery punk band for the modern age, MUNA delivered an unforgettable performance rooted in care, fun, and, to quote Gavin, “horniness.”

The band’s stage presence is undeniable, and made the show feel like an intimate night spent with friends, rather than the massive concert it was. McPherson, Gavin, and Maskin danced together, teased each other, and bantered as though they were letting the crowd in on their many jokes. At one point during “No Idea,” “one of the horny ones” from MUNA’s latest album, Gavin and McPherson had a moment on stage inspired by the song’s lustful lyrics. After the song ended, Gavin turned to McPherson, incredulously, “I can’t believe you let me put my finger in your mouth … That was fucking crazy.” 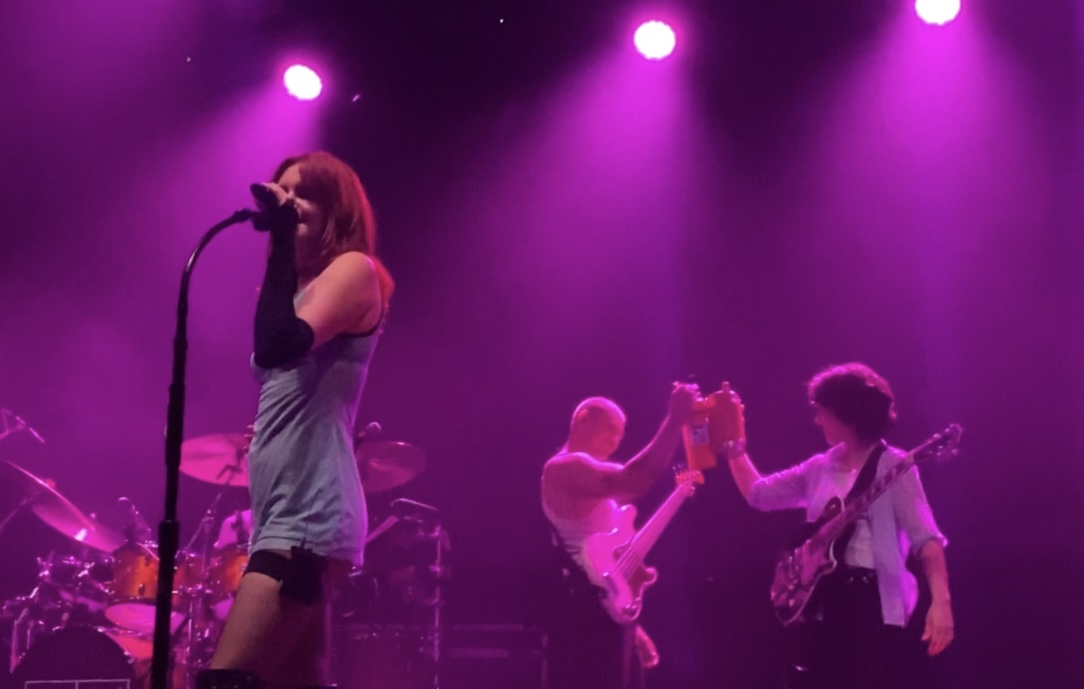 Katie Gavin talks to the Royale crowd with Maskin and Botelho in the background. By Courtesy of Sofia Andrade

Throughout the show, the trio made sure to hit all the right notes, playing songs from across their expansive discography, complete with a cover of the heavily-memed yet adored “Mr. Brightside.” Songs like “Number One Fan,” “Anything But Me,” and “Pink Light” were emotional highlights, showcasing the band’s endless capacity for joy and self-love despite— or even amid— heartbreak. Others, like 2017’s “If U Love Me Now,” which Gavin called “the saddest song in our entire discography,” showed how far the trio has come. But it was "Home By Now" that really sold the show. Maskin, McPherson, and Gavin took over the stage, making sure to reach every corner of the audience with the song's chorus, their fists in the air.

It’s been a big few years for MUNA. After a difficult pandemic year, they became the second artist signed to Phoebe Bridgers’s Saddest Factory Records in May 2021. Their first single on the nascent label, 2021’s “Silk Chiffon” with Bridgers, became a chart-topping hit and indisputable queer anthem. Now, their self-titled album, itself a sort of rebirth for the band, has set MUNA on their biggest headlining tour to date. “The last time we were playing venues this size, we were opening for other people,” McPherson said from their post on stage left. “It's so cool playing shows like this.” 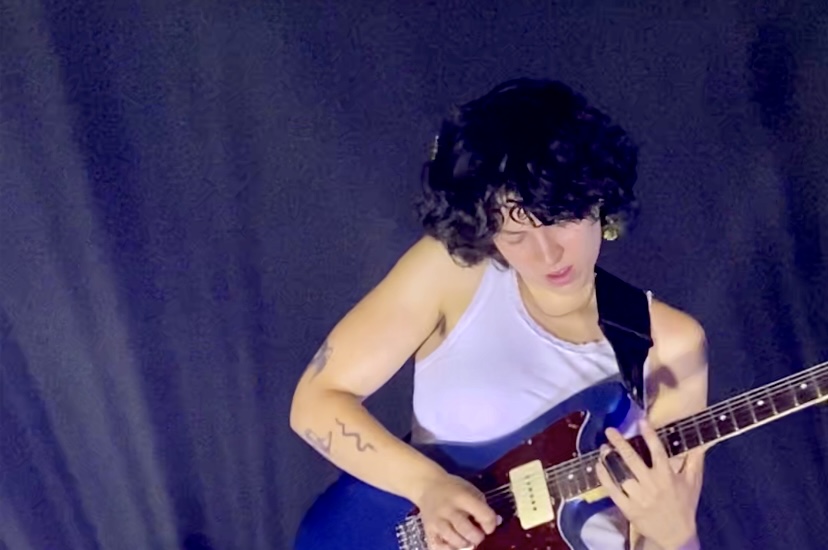 Maskin shreds on her guitar. By Courtesy of Sofia Andrade

That sentiment was shared by the band. Talking about how the show represented the first night of a months-long headlining tour across the U.S., Maskin shared that “it just feels so special.” At another point, she said, “we haven't played a show in a month and this is just the biggest welcome.” Indeed, the crowd at night one of MUNA’s two-night Royale residency was fervent, the roars of adoration nonstop. Some traveled in from out of state, some attended with their exes, and for many, it was their first time seeing MUNA on stage. The majority, though, knew the words to every song and enough about the band to laugh along with their inside jokes, a testament to the community of inclusivity the band has intentionally built.

MUNA is the greatest band in the world. They know it, and now Boston does, too.