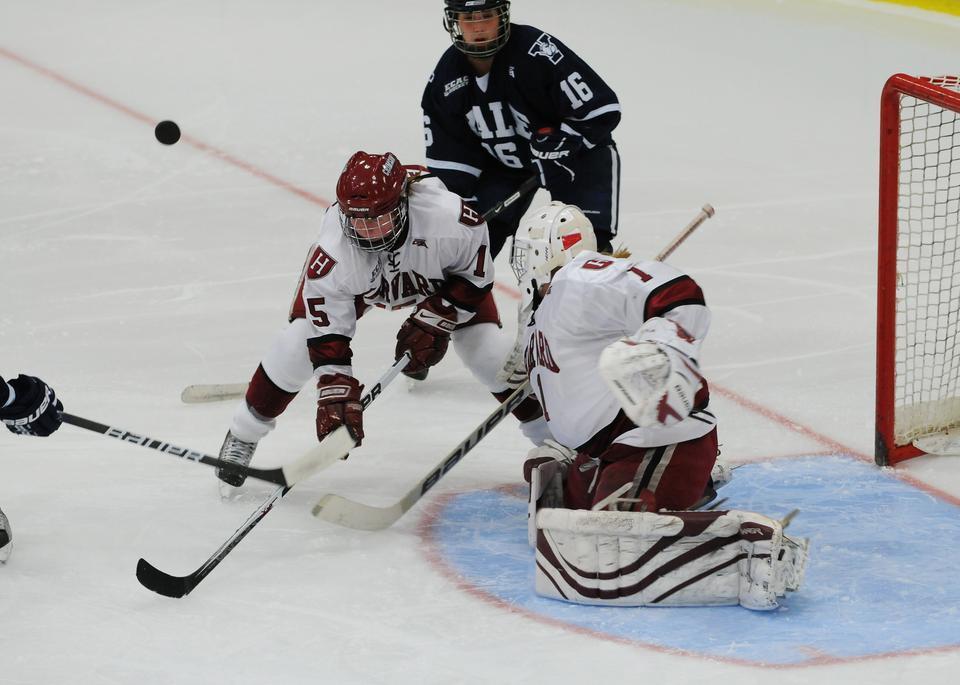 Last Saturday, the Princeton women’s hockey had home-court advantage and a goalie who made 30 saves. Harvard had senior Katharine Chute. The Minnesota native, named “Ms. Hockey” in high school, scored both goals for the Crimson in a 2-2 tie. Playing in her final year for Harvard, Chute hopes that this is only the beginning of a great season for her and her team. In this exclusive interview, Chute looks back on her time in crimson, from embarrassing moments to dancing parents to touchy subjects. Every week, the Full-Court Press gives you the sort of personal scoop that you’re not likely to hear at a typical press conference.

Stats: A two-time ECAC Hockey All-Academic team pick, Chute finished her freshman year with a +15 ranking, scoring the game-winning goal against Clarkson in the ECAC semifinals. Chute was also prolific the two previous seasons, playing in all 65 matchups and scoring five goals each year.

When we're at home, I have toast with peanut butter and banana, rice with pasta sauce and cheese, chicken or fish, some veggies or salad, and lots of water. I used to say I don't have a routine, but apparently I do!

I actually don't listen to much music because it distracts me, so it's a short list. I like Wavin' Flag by K'naan and Remember the Name by Fort Minor. Plus, we have a few team pump-up songs, but I won't divulge those here.

I love to play Minnesota because it's my home state and it's always a hard-fought battle. I love the Midwestern style of play with an emphasis on speed, physicality, and play-making.

Let's just say we've had some pretty outrageous psych ups. And also, every spring there is a figure skating show at our rink and they walk through our locker room to get to the ice. It's always a touchy subject.

5. Most embarrassing moment you've had on the ice.

My freshman or sophomore year, I was starting in one of our Beanpot games, and there was a pretty good crowd. Normally during announcements, we skate through the team along the goal line and then turn up ice and stop on the blue line. Well, it all started out fine, until I realized I was going way too fast heading into the turn...by that point there wasn't much I could do, and I lost an edge and hit the boards with a bang. Everyone was watching. I honestly just laughed at myself! Classic mistake. It must've pumped me up, though, because I remember I played a great game afterwards!

I'm not really sure. My teammates described me as a hare one time, but that may have been more of a personal judgment...

7. Most ridiculous thing you have heard a fan yell at a game you were playing in.

Hmm...I can't normally hear individual comments, but oftentimes I catch some of our parents dancing to the music. Sometimes they're good enough to make it on the Jumbotron.

I'd have to say Cross Country and Track and Field, since [those are the sports] my roommates [participate in]! It'd be quite the change though!

Chaser, because I think they'd get to do the most flying. I wish it were possible!

Joe Mauer of the Minnesota Twins, and I'd bring him to my teammate Lu's house because I know she'd be extremely jealous.