Around the Ivies: Let the Games Begin 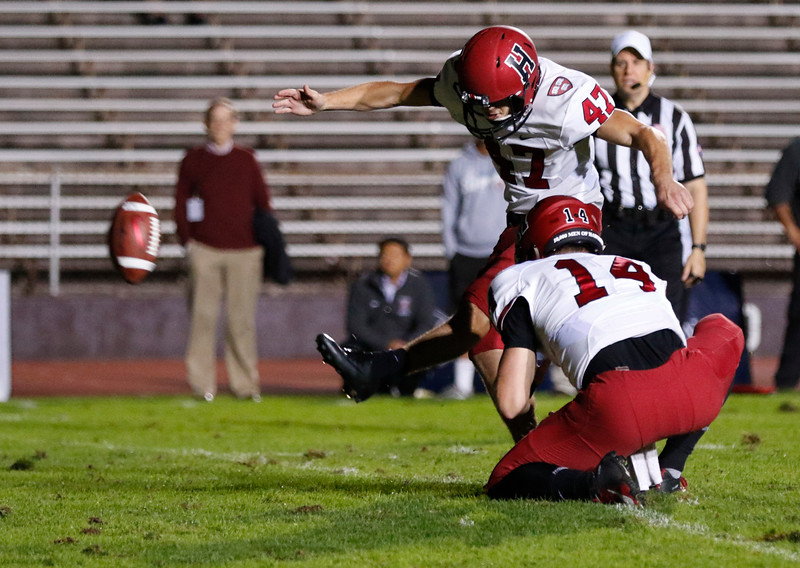 Harvard takes on Brown in a primetime night contest for the second game of the year once again. By Timothy R. O'Meara
By Joseph W. Minatel, Crimson Staff Writer

While Brown might be the team that gains the most from an exploding playing surface, as anything that deviates from the game of football helps their cause, this is not the reason I chose Bane’s quote from the clearly second-best of Nolan’s Batman films to open this column. Yes, the Ivy League football teams opened up play last week against non-conference opponents. Yes, those were official games that are in the final, overall standings. No, they do not affect the Ancient Eight winner whatsoever.

This week, four teams finally play games that will determine the conference champion, with Harvard and Yale each hosting Ivy League foes. Since I feel that I snubbed the best movie of the trilogy in the first paragraph, I will make sure to devote the rest of the article to The Dark Knight, especially with the possibility that the new Joker movie coming out next weekend doesn’t hold up. I have faith, though. Excited for October.

“If you’re good at something, never do it for free.” — Joker

Yale athletics definitely understand this principle better than Gotham’s gangsters and thugs, judging by its central involvement in the recent college admissions scandal. Kudos to being the only Ancient Eight school, which are barred from granting athletic scholarships, to spin the cash flow in the other direction.

The football team, however, did not violate a single NCAA rule. The Bulldog squad that trots out Saturday will be a completely legal opening to Yale and Cornell’s Ivy League debut. Even Harvey Dent has no dirt on a squad that somehow retained 21 of 22 starters from last year’s team. Should help them out.

“You complete me.” — Joker, to Batman

Fun fact: Columbia and Georgetown have a dual degree program between their engineering schools, despite the fact that they are approximately four hours away. You spend three years in the nation’s capital and two in the Big Apple and end up with an A.B. from Georgetown College and a B.S. from Columbia University. Hopefully this weekend’s game doesn’t jeopardize the engineering schools’ relationship. If Vegas is correct, the Gotham Knights shouldn’t have much trouble with the Hoyas.

The Ancient Eight is so exciting because any team can beat any other team in any given week. For Princeton, however, this doesn’t seem to hold true, as the Tigers haven’t been defeated since 2017. Last week, I favored Princeton by 35 points. They went out and won by 42. It’s gonna take a lot to stop this juggernaut. Even the National Guard couldn’t stop Bane, and that was only the second-best Nolan Batman villain, including Liam Neeson. Bucknell is no Batman.

“Madness, as you know, is like gravity. All it takes is a little push.” — Joker

Nobody understands this quick descent into madness better than the University of Pennsylvania Dean of Undergraduate Admissions. Eric Furda, who’s been in the position since 2008, was filmed during the recent Eagles-Lions game voicing his profane frustrations with the Eagles. To be clear, I am in no way criticizing Dean Furda. If I were an Eagles fan this year, I would react similarly. In fact, he seems abnormally sane to me. Luckily for Furda and others, the Quakers are not the Eagles.

“This is what happens when an unstoppable force meets an immovable object.” — Joker

Over the past two seasons, the Big Green Defensive Machine™ (eventually it’ll catch on) has looked like an immovable object. Last week Dartmouth kept Jacksonville in the single digits, allowing only six points. Crimson style mandates that I must write out the text for any number under 10. The way Dartmouth has been playing, my ATIs are going to turn into arthritis.

No one ever goes to Hanover (at least by choice). But for the very few who do, you rarely leave with a lot of points under your belt. Same goes for Colgate.

“You know what I’ve noticed? Nobody panics when things go according to plan.” — Joker

It would very much be according to plan for Harvard to defeat Brown this week. The first game of the week is under Friday Night Lights, and the Crimson haven’t needed Coach Taylor’s inspiration to dominate the Bears in recent matchups.

“Everyone loses their minds! Introduce a little anarchy.” — Joker

Brown would definitely have to produce at least a bit of Ancient Eight anarchy this week to upend Harvard. The Bears squeaked by Bryant and will be looking for its first Ivy League win since 2016. It hasn’t topped the Crimson since 2011, getting used to losing its sharpied-in second game of the year.

“Upset the established order, and everything becomes chaos.” — Joker

For a conference whose academic institutions represent the very idea of established order in higher education, everything often truly does become chaos. Maybe Brown has more of a chance than everyone is giving them, and maybe the Bears’ first game is a sign of true success to come.

“Let’s not blow things out of proportion.” — Joker