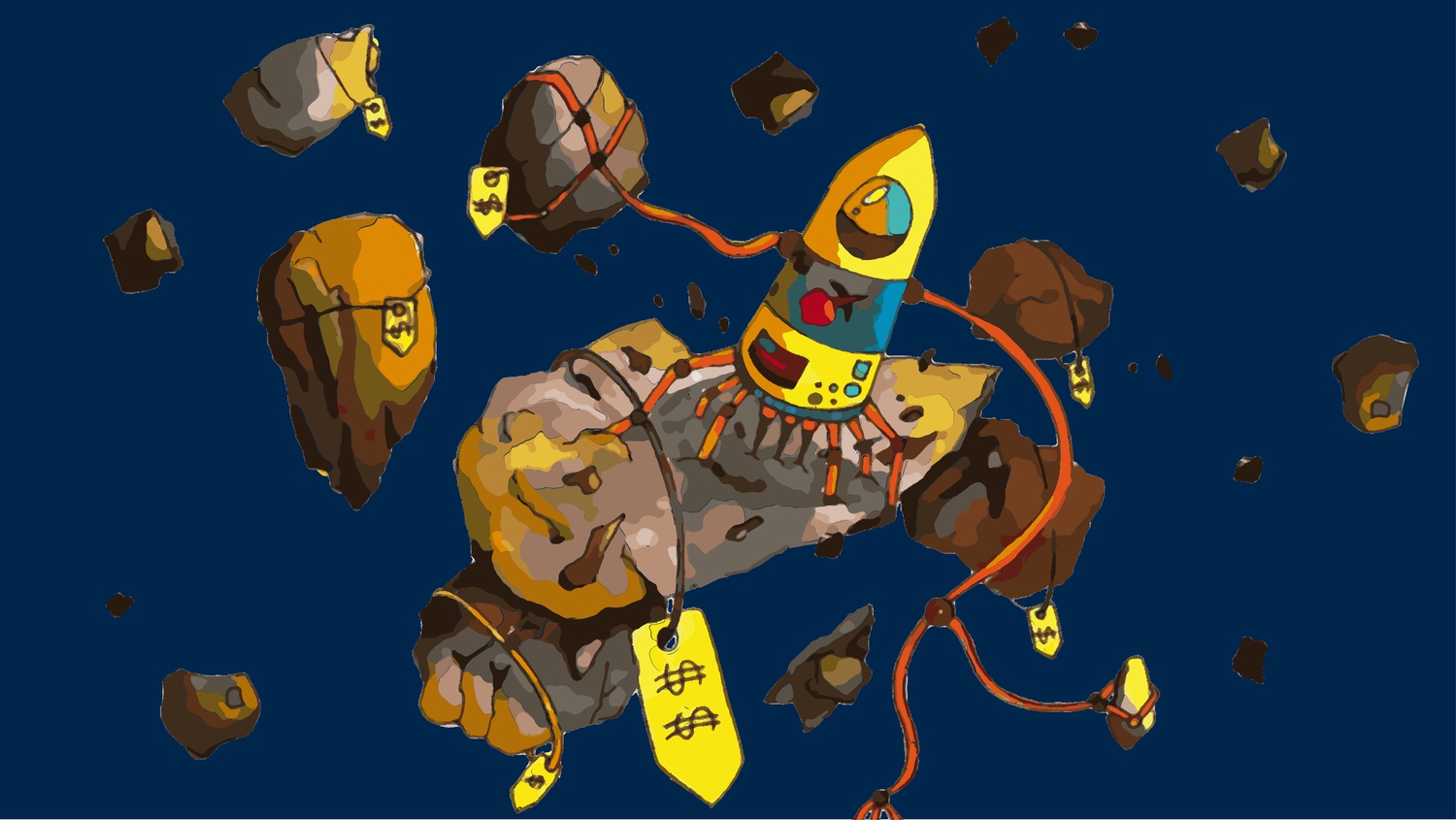 What’s the largest amount of money that you can think of?

The biggest U.S. lottery jackpot of all time was $1.586 billion. The total net worth of the world’s richest man, Jeff Bezos, is estimated to be $116 billion (at the time of publishing). And in 2018, the Gross Domestic Product of the entire world was $85.910 trillion. With those figures in mind, I ask again: what’s the most money that you can imagine?

There is an asteroid between Mars and Jupiter, named 511 Davida, which is estimated to be worth $15.4 quintillion. That’s 15,400,000,000,000,000,000 dollars — in other words, just enough money to afford popcorn at your next trip to the movies. In fact, Davida is one of a few dozen asteroids in our solar system that are valued at over a quintillion dollars; hundreds more are valued in the trillion- and quadrillion-dollar range.

Given those numbers, it should come as no surprise that, since the start of the century, numerous companies have emerged seeking to bring asteroid mining from science fiction to reality.

There are two main ways to accomplish this feat. The first involves launching an unmanned spacecraft equipped with mining gear, which would collect a chunk of an asteroid and bring it back to Earth. The Japanese Aerospace Exploration Agency has proven that this is technically feasible; its Hayabusa mission brought asteroid dust samples back to Earth in 2010, while its Hayabusa 2 mission is expected to bring back larger samples later this year.

The second method is more ambitious. As the research shows, we could hypothetically build a spacecraft that could capture a small asteroid and place it in orbit around the Earth or the Moon. Once it’s that close, we could collect the mineral resources with relative ease; with the right asteroids, this could allow trillions of dollars worth of material to be brought to Earth.

If asteroid mining does take off as the next big industry — as some magazines have predicted — then this would certainly have its benefits; the most obvious is a potentially massive economic boost to us here on Earth. (Looking at the Dow, we could certainly use one right now.)

If asteroid mining were carried out by a government agency like NASA, the unbelievably high profits could be used to support a host of beneficial causes, from funding welfare programs to supporting scientific research. If, on the other hand, asteroid mining was performed by private companies, the monetary benefits would certainly not be as widespread. Even so, this money would be a big boost to the global economy — and governments could still profit off of it through high corporate taxes.

Of course, introducing a massive amount of precious metals into the global economy would steeply devalue those materials, so the overall profits of asteroid mining will probably be far lower than they appear on paper.

But asteroid mining could also help lessen the destruction caused by current mining here on Earth. The Guardian reports that “Extraction and primary processing of metals and other minerals is responsible for 20% of health impacts from air pollution and 26% of global carbon emissions.” If we shift our attention from the Earth to the sky in order to satisfy our needs for certain minerals, we could avoid much of the environmental degradation caused by Earth-based mining today. Plus, if humans were to deplete Earth’s cheap mineral resources — which we are in the process of doing — mining asteroids may one day be viewed as a necessity.

That being said, advocates of asteroid mining must be mindful of the ideology underpinning their movement. I found myself fascinated by Asterank’s interactive table of asteroids. The chart lays out the distance of the solar system’s asteroids from the Sun, the eccentricity of their orbits, and their velocity — so far, all things you might expect to see in an astronomy textbook. But the central two columns stick out like sore thumbs: “Value ($)” and “Est. Profit ($).”

Viewing asteroids through the lens of “How profitable might they be?” can have dangerous implications. If we begin our exploration into space with a profit-oriented mindset, then the next few centuries of space travel will likely be dominated by that perspective; we’ll enter a period of space exploitation, not space exploration. And, if we don’t restrain that mindset, scientists warn that we could use up all the solar system’s essential resources in a matter of centuries.

So, the prospect of asteroid mining offers a turning point for how humanity interacts with the natural universe. Will we allow ourselves to be ruled by greed, quickly gobbling up all the natural resources within reach of our spacecraft? Or will we use space travel as a tool to explore and appreciate our planet’s surroundings, taking only the resources that we truly need? The choice is ours — and it’s a choice that will affect humanity’s future for centuries.

Daniel L. Leonard ’21, a Crimson editorial editor, is a joint History of Science and Philosophy concentrator in Winthrop House. His column appears on alternate Mondays.