Graft and Ash for a Three Monitor Workstation 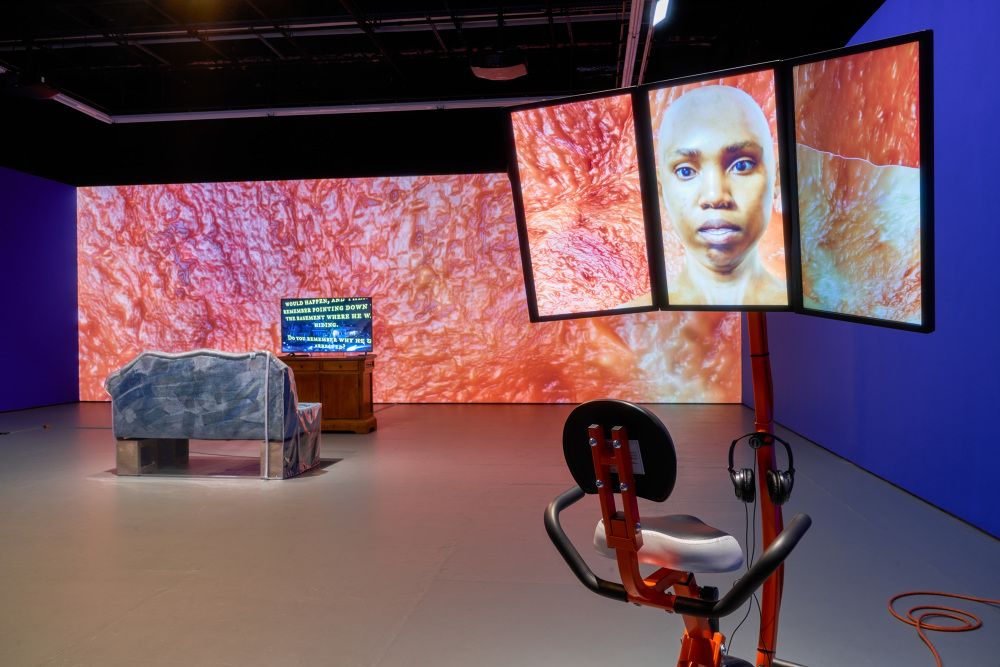 Graft and Ash for a Three Monitor Workstation By Courtesy of Sondra Perry
By Elodie A. Saint-Louis, Crimson Staff Writer

There is one passage from Claudia Rankine’s “Citizen: An American Lyric” that I have been unable to forget since I read the book cover to cover one hazy, sweltering afternoon. It was July in Cambridge and I remember feeling weary, mostly from the heat but also from the state of the world around me. That year everything bubbled over. There were names on top of names on top of names, names that filtered through my body as I chanted and marched on Massachusetts Avenue and in Boston Common. Sandra Bland had died, and the next day I found myself turning 19. I suddenly could not understand the very fact of my being and did not know what my body signified to other people.

Rankine insists that the black body often finds itself in a zone of precarity, one bounded by transgression rendering useless all efforts to move forward and keep going:

“Yes, and the body has memory. The physical carriage hauls more than its weight. The body is the threshold across which each objectionable call passes into consciousness—all the unintimidated, unblinking, and unflappable resilience does not erase the moments lived through, even as we are eternally stupid or everlastingly optimistic, so ready to be inside, among, a part of the games.”

Attempts to combat racism are often predicated on the purposeful forgetting and assimilation of one’s racial and gendered body. One thinks of the oft-repeated suggestion to pull oneself up by one’s bootstraps, as if the body will not longer be objectified or treated as abject if one finds a way to just simply stand up straight. Like Rankine, I find this instinct to “play the game” correctly—that is to engage in the politics of respectability—both naive and exhausting. In “Graft and Ash for a Three Monitor Workstation,” currently on view at the Institute of Contemporary Art in Boston, media artist Sondra Perry engages in the discourse around racial uplift through a clever manipulation of technology, while providing incisive commentary on the hidden labor black bodies are constantly asked to perform.

Perry “appears” in “Graft and Ash” in disembodied form, specifically as an animated head that floats in and out of virtual space. Although constructed from her image, the visible avatar is a collective and representative we, definitively separate from the “real” Perry. This “unified” Perry addresses the viewer and surrounding gallery space in both automated spoken word and movement, its eyes and head spanning three screens arranged as a triptych. The multiplicity of Perry’s form reveals an underlying struggle to be embodied, to become grounded in a physical self that eventually finds itself disrupted and undermined.

Exhaustion, for Perry, becomes an emphatic space of provocation and intervention. The formal linchpin is the Pantone-orange exercise bike mounted beneath the trio of monitors, taken from a station designed to help workers “incorporate physical activity during their workday.” The viewer must physically contort their body in order to fit inside the machine, which allows Perry to directly interfere with—and therefore complicate—their physical relationship to the gallery space as well as the work of art. This discomfort also places the viewer in a position of vulnerability, a state critical to maintaining the stakes of Perry’s political and artistic claims.

Tucked awkwardly into the “workstation,” peering into Perry’s eerie head, I thought about black people’s relationship to embodiment across time and space, in the past, present, and future. The fact that mourning in black life seems hinged upon a profound desire to return Home—home being one’s body—is no great surprise. The very idea of blackness began across the Atlantic—that vast and incomprehensible body of water—and the black body has found itself fragmented and commodified ever since.

Citing a 2015 study in the “Journal of Behavioral Medicine” on the effect of “the just world belief” on psychological responses to perceived discrimination, the Perry avatar criticizes that black people must constantly prove their worth and reach their full potential through hard work. “Productivity is painful and we haven’t been feeling well. Just being who we are is extremely risky, she explains. Working to appease, to not stand out, not only requires a massive amount of effort, but is also linked to higher rates of chronic illness. Labor, framed as productivity, is then akin to violence.

Perry’s work asks what happens when black bodies interact with technology and virtual representations. Emerging software and hardware may offer new possibilities, but also continues to perpetuate existing biases and subjectivities. Hand-dispensers have difficulty recognizing dark skin. Reports suggest that predictive analytics software used by police officers is based on programmed predilection for blacks. And when constructing the virtual model for “Graft and Ash,” Perry found that her body type was unavailable as an existing template.

What if the futuristic black body—as cyborg, bot, or avatar—wasn’t predicated on optimism, and instead, as with Perry and her workstation, functioned as a corrective and disruptive force? “We are not as helpful or Caucasian as we sound,” the Perry avatar says toward the end of the video. In another moment, it proclaims that “we are a DIY, not all a representative thing, which makes being a being impossible, or whatever.” The ambivalence of this “whatever” feels so right, and perfectly sums up the weariness, tenacity, and dejection that come with inhabiting a body.