The Near Myth of Cultural Appropriation

A problem of neurosis and misdiagnosis 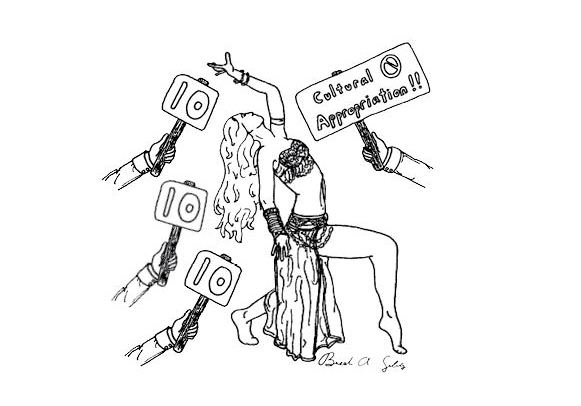 I don’t think I’ve ever personally encountered a case of cultural appropriation during my time here.

Of course, that’s not to say cultural appropriation doesn’t exist. We just happen to go to a school that tends not to host parties revolving around blackface, sombreros, and war bonnets, and live in a society that generally looks unfavorably upon those things.

By Breslin A. Sibley

Yet virtually any casual Internet surfing will yield cries of appropriation everywhere. The very definition of cultural appropriation—taking up parts of a culture other than your own for the purposes of ridiculing it—has been expanded in the social justice lexicon to mean little more than identity policing.

Take music: the most active arena for these largely meaningless criticisms by the appropriators of cultural appropriation. White rapper Iggy Azalea is criticized for “affecting a culturally black accent and vernacular and flaunting physical features, like a large rump.” Isn’t loving and respecting the diversity of bodies something that this crowd generally supports?

For “adding in a racial element while she copied the dance moves of strippers and bellowed her love of drugs” in her VMA-twerking performance, Miley Cyrus was denounced by a writer for the Guardian who ludicrously sought to equate the event with the nonrealization of Martin Luther King’s Dream. “Cyrus’s act was less a homage to hip-hop and more a minstrel show,” the headline blared.

Whatever sins the singers may have committed against our sensibilities, I find it impossible to mention them alongside minstrels and the struggles of the Civil Rights era, much less associate the two.

Of course, common to all these frequently trotted out equivalences is the absence of justification for their extremism—as if axiomatic, appropriation is treated as not only morally repugnant in its own right, but also as one and the same with racism itself. To even make mention of this missing logical linkage is to be guilty of “tone policing”—and the sands pile further on the buried heads.

The usefulness of the concept of cultural appropriation—to identify and denounce those who hijack other cultural elements for the purpose of mocking and jeering—is instead lost in a sea of self-indulgent denunciations that articulate neither a discernible principle nor actual harm.

Without explicit statement (for doing so would only make the argument’s flimsiness obvious to all) these shallow articles proffer a single, self-contradicting demand: that each race keep to themselves, and that traits traditionally associated with one cultural group remain with that group alone. It’s the same, ugly to-each-their-own conception of race we’ve long known, only now dressed in the frills and flourishes of political correctness.

How unfortunate that this disturbing trend has come to be associated with liberalism, when its core tenet is the freedom of ideas, allowing the best ones to triumph based on their merit. Instead, appropriators of cultural appropriation focus entirely on the style, not the substance.

It’s not enough that those who assimilate elements of other cultures are immediately assumed to be racist unless they claim otherwise, but even those who voice a sincere, clear, and well-intentioned interest are assumed to be insidious liars, their voices discounted and their intents assumed for them.

“Tokenization,” the critics proclaim. White people are simply “assuming everything but the burden,” co-opting blackness without having to assume any to deal with any of its socially imposed burdens. In the same paragraph, a blanket assertion is usually proffered that these people also don’t denounce those unfair prejudices, the implication being that they are secretly and sinisterly approving of them despite their apparent appreciation.

Not speaking about a moral wrong within any given speech or song is assumed to be complicity in these circles, which is, to use an overused word, problematic, since there are such an impossibly high number moral wrongs than we could plausibly denounce in a single setting. Yet that is the very standard by which Taylor Swift is condemned for inviting Fetty Wap to the stage and publicly announcing her admiration for Kendrick Lamar. Oh, the horror.

Look at any of the plethora of these articles populating and polluting your newsfeeds, and you’ll find the same fallacious logic pattern: white person (usually a woman, interestingly enough) is juxtaposed with a non-white cultural element—hence cultural appropriation, and thus the perpetuation of racism.