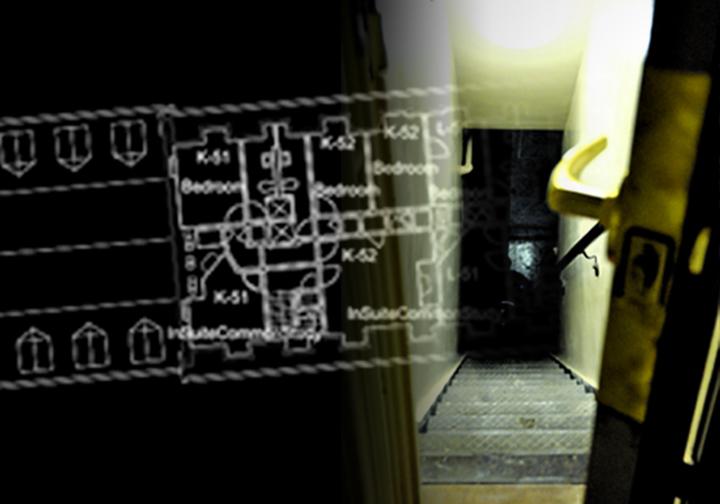 Hoi Q. Nguyen ’10 was expecting a low-key shift while working one day in the Dunster House library a year ago.

As he sat at the desk near the entrance, with a view of the entirety of the library in front of him, he heard the sound of a knob turning from behind—an odd occurrence, because the library doors are usually propped open.

Caught off guard, Nguyen turned around to find the bookshelves opening up and a person nonchalantly walking into the library from behind its walls.

“I can imagine people going in there and doing shady business,” said Nguyen, who added that many undergraduates—including some Dunster residents themselves—don’t know about the swinging shelves.

From library walls opening up to unsuspecting residents to hidden rooms concealed behind seemingly unusable doors, such eccentric architectural features of the College’s neo-Georgian Houses are a surprising, but unique, aspect of the undergraduate experience. From their construction in the early 1930s to today, the stoic charm of these buildings has come to embody Harvard’s identity, both among its student body and to the outside world.

“I think in the case of the Harvard buildings, it was just an enduring sense of spatial wonder that led some patron to put a little extra charm in the houses,” said Harvard Graduate School of Design Professor K. Michael Hays.

But with House renewal—the estimated $1 billion project to physically reconstruct and modernize the College’s 12 upperclassman Houses—slated to begin in three years, undergraduates, tutors, and House Masters all voiced concerns over whether the initiative will leave intact the neo-Georgian Houses’ architectural oddities, which they say have contributed to the character of the Houses over the last eight decades.

Residents who stumble upon elusive passageways and rooms in the neo-Georgian Houses—which include Adams, Cabot, Dunster, Eliot, Kirkland, Leverett (McKinlock), Lowell, Quincy (Old), and Winthrop Houses—often become the gatekeepers of these hidden spaces.

When Adams resident Toomas Laarits ’10 moved into C-57 last year, he and his roommates settled into what they thought would be a triple. A week into the school year, a senior whom Laarits had never met asked him for access to some “storage space” in his bedroom.

To his surprise, the senior opened a metal door in Laarits’ room that Laarits had previously overlooked, which led to a concealed bedroom. The triple in Adams C-57 was actually a quad.

After clearing out golf clubs and other vestiges of residents past, Laarits and his roommates decided to furnish the space, installing a chandelier in order to transform the dusty room—which prior residents of C-57 had used for storage—into a weekend party spot.

“Sometimes when we had parties there, people would come up to me the next day and say, ‘Did we go into a wall last night?’” Laarits said. “And then I’d say to them, ‘No—don’t know what you’re talking about.’”

While Adams residents have used the distinctive features of their rooms for personal use, some Kirklanders have incorporated their spaces into House-wide traditions.

Kirkland B-51 resident Michelle E. Seslar ’11 said her room hosts a “time-honored” Kirkland event, which she wasn’t “at liberty to expand upon,” as a result of a unique architectural configuration that allows the room to expand into a neighboring entryway.

In addition to the connecting entryway, the dwellers of B-51 have made use of a secret stairwell—which is otherwise concealed behind an activated fire door—to conveniently gain access to another Kirkland room.

The women of B-51 have established a quirky protocol for entering the adjoining suite, which is inhabited by several Kirkland men.

“The rule is, you’re supposed to knock, yell [the resident’s] name, and wait for a response,” said B-51 resident Basima A. Tewfik ’11. She added that when she once failed to follow this specific sequence, she had to provide candy corn to make up for the infraction.

Harvard’s Houses have become a hallmark of the nearly four centuries-old institution, despite the fact that they were only constructed relatively recently, in the first half of the 20th century.

The neo-Georgian style, which derives its name from the first four British monarchs of the House of Hanover (Georges I-IV), takes its inspiration from the highly symmetrical and ordered style of Georgian architecture in 18th- and 19th-century England.

Neo-Georgian architecture in the early 1900s eschewed features of modern architecture such as steel and cement, favoring instead the stately red brick and sash windows that were more characteristic of an earlier time.

But seemingly inexplicable secret rooms and hidden doorways may have once served a contemporary purpose for residents of Harvard College.

In 1932, when Adams House completed its conversion into an upperclassman house, Americans were still struggling against the constraints of more than a decade of Prohibition. Hidden rooms, including the one in Adams C-57, could have functioned as a hideout for producing and consuming moonshine liquor, as was a common practice in buildings across the country at the time.

Secret staircases, such as the one in Kirkland B-51, could have served as service stairs. Unlike the public stairs in plain view in several Houses, servants most likely traversed those staircases hidden from sight as they waited on their wealthy undergraduate patrons.

But, according to Hays, architectural quirks like moving bookshelves and tucked-away rooms were probably built more for aesthetic than practical reasons.

“Who wouldn’t want a secret room or secret passage?” he said. “My guess is that these features in the Harvard houses are for pure pleasure—more elaborate versions of reading alcoves and window seats that were also enjoyed.”

According to Hays, the priorities of architects who designed and constructed neo-Georgian buildings in the first half of the 20th century were markedly different from those of architects today.

“In past times, architects and their patrons expected their buildings to have more mystery and wit than we do today,” Hays said.

The College’s nine neo-Georgian houses have withstood decades of wear and tear since they were constructed between 1910 and 1930, making them prime candidates for extensive reconstruction.

They have since been named historical landmarks by the City of Cambridge and, according to the Office of Student Life, will maintain their historic facades, even though their interiors are expected to be completely revamped.

The Report on Harvard House Renewal, released by the College administration in April 2009, stressed the need to upgrade the Houses for 21st-century living, while still maintaining their unique “Harvard aura.”

But with the loss of the physical space within Harvard’s historical walls comes not just the potential loss of quirky architectural features, but also the loss of stories of past inhabitants that are inextricably tied to House spirit.

“[Internal renovations] will inevitably affect House spirit negatively,” said current Eliot House Master Lino Pertile. “The distinctive nature of various Houses has to do with the design of the House—the feel of it. The more you flatten out this distinctiveness, the more [the Houses] become the same, and so the more difficult it is to have House spirit.”

Some argue that the proposed changes to the Houses necessarily stray far from the initial neo-Georgian conception of House life in the 1930s.

At the time, aristocratic white men— who donned black coats and ties and enjoyed the services of in-House servants—lived in the Houses. Today, women and students of diverse ethnic and socioeconomic backgrounds comprise Harvard’s undergraduate population.

The under-utilized squash courts and empty in-House pools of many Houses may be replaced by modern amenities. The Pfoho House Committee has proposed including a bowling alley, which is also supported by House Master Nicholas A. Christakis.

Still, as the process of House renewal moves forward, Jonathan Levi, an architecture professor at the GSD, emphasized the importance of having a forward-looking approach to redesigning the College’s unique residences—just as the original architects had nearly eight decades ago.

“My hope is that the administration and students will take into account the future—the needs of the future, and how the University of the future needs to express itself,” Levi said. “The past is only so beautiful as it is because people at the time were emboldened to think what the future meant for them, and we have to take on that charge ourselves.”

“It takes leadership to look beyond the myopia of the past,” he added.

—Staff writer Bita M. Assad can be reached at bassad@fas.harvard.edu.

—Staff writer Ahmed N. Mabruk can be reached at amabruk@fas.harvard.edu.