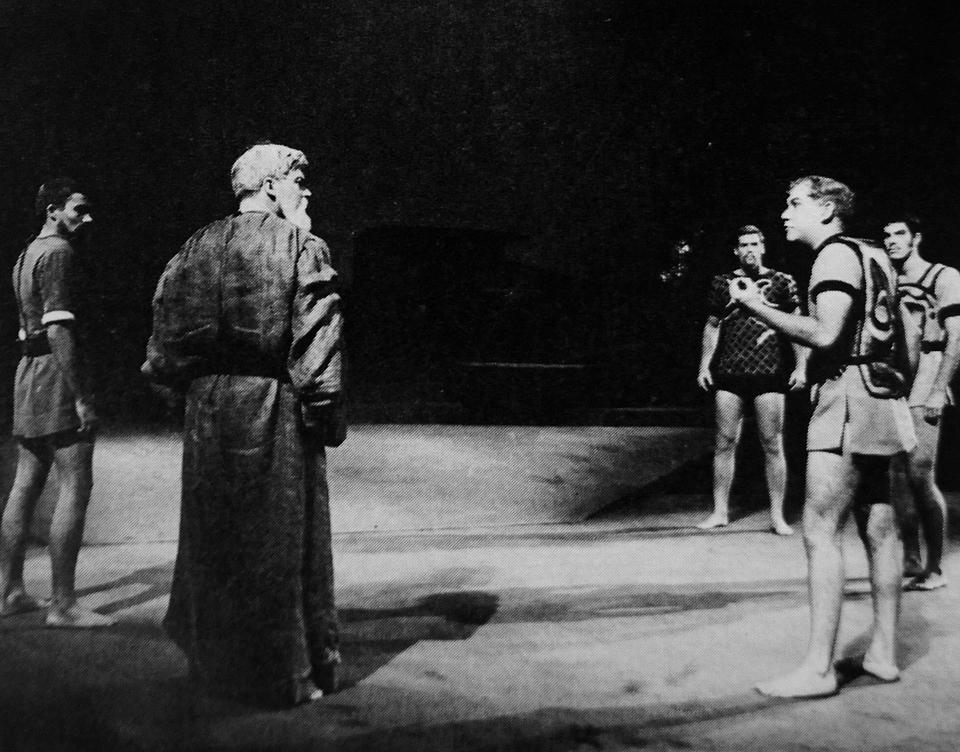 “Take but degree away, untune that string, and hark what discord follows,” says a Harvard student acting as Ulysses, a character in “Troilus and Cressida.”
By Erika P. Pierson, Crimson Staff Writer

In the late 1950s, George C. Izenour, a pioneer of theater technology, was invited to a conference in New York City to consult on the construction of the New York Metropolitan Opera House. Izenour told his audience of top theater specialists about his ideas for a black box theater, specialized rigging systems, moving seat wagons, and electronic lighting boards.

“Everyone pooh-poohed him and told him he was crazy,” said Donald R. Soule, the original technical director at the Loeb Drama Center and assistant to Izenour. “The only person he seemed to impress was Harvard English professor Robert Chapman. Chapman called him up the next day and I answered the phone.”

Shortly thereafter, Izenour and Robert H. Chapman, who would become the first director of the Loeb, met in a small New Haven coffee shop where, on the back of a napkin, Izenour drew up the plans for what would become the Loeb.

While the theater scene on campus was thriving even before the completion of the Loeb in 1960, the state-of-the-art facility opened up new opportunities and eventually the chance for students to work alongside a professional theater company.

‘EVERYTHING ON OUR OWN’

Before the Loeb was constructed, student productions were a highly self-sufficient affair.

“We were extremely independent,” said Joel F. Henning ’61, former president of the Harvard Dramatic Club. “Was that was fun? Yes, absolutely. We got to do everything on our own, but the Loeb Drama Center changed all of that.”

Students involved in productions rented costumes, sets, and lighting equipment without help from the College. But this hands-on learning experience also led to some headaches.

“I forgot that Memorial Drive had huge oak trees hanging over it,” Henning said. “We were trucking a set to Agassiz and one of the oaks knocked it right off the truck into the middle of Memorial Drive.”

With the Loeb’s on-site scene shop and new rigging technology, students would no longer have to rely on rentals. However, access to such expensive and advanced equipment came with a price—a new non-student chain of command.

“We wanted to do some summer productions so we had to go be interviewed by President Pusey,” Charles W. Hayford ’63 said. “We didn’t really have control over the building.”

“Now, this is an institution. I couldn’t just say, ‘Hey let’s just do XYZ play,’” Henning said. “You had to go to Chapman, apply, and present all your ideas.”

Despite increased University control over the building and the introduction of professionals to run the space, alumni insisted that for the most part the Loeb was a positive addition to the dramatic arts on campus.

“It was a little more structured and a little bit more institutionalized. There were other [non-student] minds, but very creative minds, which were coming up with proposals,” Henning said. “But was it agony? Was it a hopeless bureaucracy? Certainly not.”

Alumni and former Loeb staff said the facility provided students with opportunities to learn from its cutting-edge facilities—and later from more experienced thespians.

In the fall of 1960, the first production, Shakespeare’s “Troilus and Cressida,” premiered on the Loeb Mainstage and presented students with an enormous learning opportunity.

“We were befuddled as we came nearer and nearer to the opening. The set just wasn’t looking right,” Henning said. The new space exposed students to dilemmas they had never seen in the dining halls and other spaces they had previously used. “We realized that the auditorium was steeply raked and the set didn’t extend far enough. We spent the next 24 hours painting the entire floor.”

But students weren’t the only ones excited about the Loeb’s dramatic possibilities.

In 1980, the American Repertory Theatre, a professional theater company founded by Robert S. Brustein, who also established the Yale Repertory Theatre, began using the Loeb for productions. Today the company is primarily housed in the Loeb, and most of the offices in the building are occupied not by students, but by the A.R.T.

Some alumni said they were shocked by this change, which raised doubts as to the purpose of the facility.

“At the time of its opening, if any of the Harvard leadership had in the backs of their minds–or the fronts of their minds–of bringing in a professional company, they kept it to themselves,” Henning said.

But with time, members of the HDC—now the Harvard-Radcliffe Dramatic Club—came to see the advantages of sharing space with the A.R.T.

“Initially, the students were reticent to have them and it was understandable; after all, it was their home and their baby. To have a strange group, especially coming from Yale, it was hard for them to get used to,” said Soule, the first technical director of the Loeb.  “But in time they realized the benefits of having this professional company.”

Soule said that even with the thriving theater community on campus, students could not realistically keep the building functioning 24/7.

“It’s the kind of situation that benefits both parties,” said J. Michael Griggs, current Loeb technical director and HRDC advisor. “For the professionals it’s a way to get space and have someone soak up the cost, and the students get the benefit of having professionals to learn from.”

Overall, those involved in the Loeb over the past 50 years agreed that the facility has primarily expanded the scope of student theater at Harvard.

“There was hardly a moment when there weren’t students working there,” Soule said. “There was an incredible amount of enthusiasm that appears to be going even to this day.”