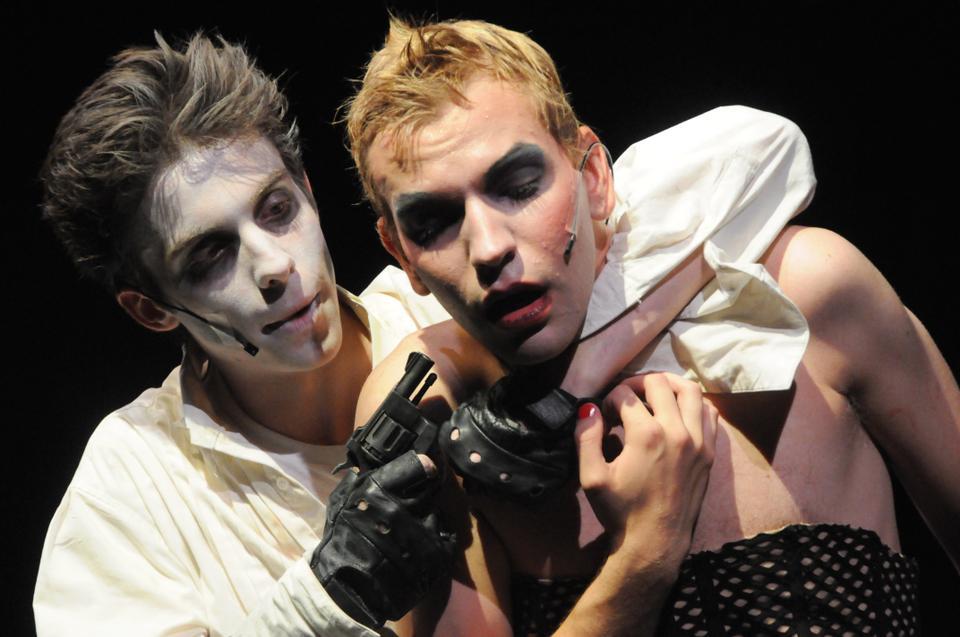 Walking into “The Rocky Horror Show,” the musical upon which the infamous cult film, “The Rocky Horror Picture Show,” is based, audiences more or less know what to expect: silly names, comedic horror, and blatantly sexual songs and dance numbers. But predictability doesn’t detract from the experience of the show; it only emphasizes the importance of each individual production’s audiovisual spectacle to its success.

Accordingly, the Harvard-Radcliffe Summer Theater production, directed by Matthew C. Stone ’11, a Crimson arts writer, was one of the more spectacular shows put on in the Loeb Experimental Theater in recent years. The musical—which played two revival performances on September 1 and 2—made the fullest possible use of the Ex’s spare black box space, employing elements like film and graffiti outside the theater to draw its audience in.

The kitsch started early with previews for films like “It Came From Outer Space” (“Sights never before seen by human eyes!”) and “Dracula” (“Back from the grave, back to thrill you and chill you!”) projected onto the curtain pre-show. Then, a scantily-dressed usherette (Meagan A. Michelson ’10) introduced the show with a come-hither rendition of “Science Fiction/Double Feature,” exhorting the audience to come see a “late-night double-feature picture show.”

The plot of the show itself is simple enough: a newly-engaged couple—the middle-class, decidedly dull Brad (Stone) and Janet (Bridget P. Haile ’11)—suffer a busted tire on the highway and are forced to seek help at an ominous-looking mansion inhabited by mad scientist/transvestite Dr. Frank N. Furter (Roy A. Kimmey III ’09) and his equally strange servants. From that point on, mischief ensues, as the pair are drawn into a world of sexual debauchery, violence, and intrigue—all played out, of course, through darkly comical songs and dance routines.

That description alone makes it clear why the production depends in great measure on the full-throttle enthusiasm of the actors. The plot is wispy at best, with minimal exposition, and the set-up is so ludicrous that the whole façade threatens to collapse into embarrassing self-parody if the performers fail to embrace it. Fortunately, the cast of this rendition by and large took up the challenge. Though the individual singing and acting varied in quality, every actor crooned and gyrated around the stage with enough gusto to compensate.

The acting, secondary though it was, did have its high points as well. Haile as Janet in particular nailed her transition from naïve, simpering girl to confident, hypersexual woman—especially in standout tune “Touch-A, Touch Me,” in which she describes her sexual awakening. Kimmey’s Frank N. Furter was over-the-top almost to a fault, but like many elements in the production, was saved by the sheer passion of his performance. Some of the actors had trouble finding the right tone for the spoken sections of the show, and as a result came off disconcertingly earnest. But more often than not, the cast hit the comedic sweet spot.

Some of the best comedy came from the show’s famed audience participation, in which fans yell lines in response to the action onstage. In this case—lacking the built-in crowd of fanatics—most of it was clearly simulated, the invention of production staff planted in and around the seats. Nonetheless, the audience’s heckling of Brad and Janet provided some of the show’s biggest laughs. After Janet tells Brad, “I’m coming with you,” one audience member crowed, “That’ll be a first!” However, some of the participation did seem genuine; the crowd responded unhesitatingly to an early request to “Give me an R! Give me an O!” and so on.

Musically, the show had high and low points. The cast’s interpretation of the musical’s most famous tune, “The Time Warp,” was one of the former, with chaotic solo dance routines and an energetic chorus of “Let’s do the time warp again!” But other songs, like “Eddie’s Teddy,” didn’t have quite enough laughs to balance out the sheer silliness of the music. That problem wasn’t helped by some technical difficulties with the microphones, which caused many lyrics to be unintelligible.

“Rocky Horror” needs to be spectacular to work, and this production aimed high with extravagantly sexual dance routines and jazzy live-band accompaniment. Unfortunately, it didn’t always keep up the tempo. When the all-singing, all-dancing spectacle died down, the show felt a little flat. The rest of the time, though, this production was campy, over-the-top, and plenty of fun, exactly like “Rocky Horror” should be.