Out of Africa, Back to the Quad 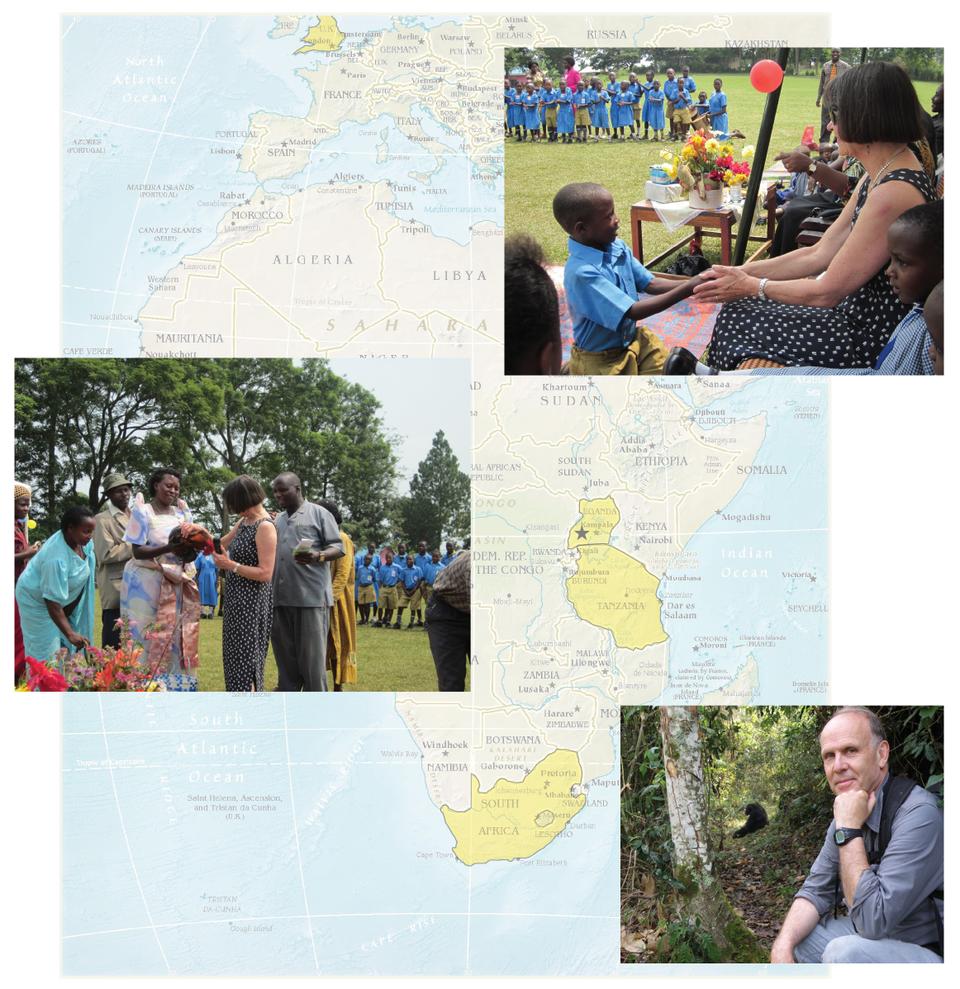 Animals as gifts aren’t new to Currier House Masters Richard W. Wrangham and Elizabeth A. Ross, but though they appreciate the sentiment, they don’t quite know what to do with them.

Over the years, Wrangham and Ross have received many animals at ceremonies in Uganda, including a bull three years ago. Ross helped facilitate the installation of electricity at an elementary school in southwest Uganda, and at a ceremony celebrating the advancement last June, she received a gift: a live chicken.

The electricity is just one initiative of the Kasiisi Project, an organization founded by Ross that is devoted to improving education and ecological conservation efforts in Kibale National Park, located in rural western Uganda.

Ross created the project in 1997 in an effort to encourage local Ugandans to preserve the Kibale Forest, where Wrangham has conducted research on chimpanzees for over 25 years.

During the House Masters’ sabbatical last year, when they were based in Cambridge, England, they spent significant time in Uganda, Tanzania, and other countries in order to pursue their research and conservation efforts abroad.

During that year, while her husband wrote about eight research articles, Ross initiated the transformation of the Kasiisi Project from a non-governmental organization largely managed by Ross into a community-based organization run by local Ugandans.

In January and February, instead of overseeing Currier House as the Quad was blanketed in snow, Wrangham and Ross lived in the Makerere University Biological Field Station in Uganda. The site is one of the oldest chimpanzee research stations in the world, according to Human Evolutionary Biology Lecturer Zarin P. Machanda, and Wrangham has conducted research there for over 25 years.

Researchers, including Wrangham, have been able to observe many chimpanzees for their entire life, and local Ugandan field assistants observe the chimps on a daily basis.

The research collected over the years contributed to some of the articles Wrangham wrote with graduate students while on sabbatical.

One of these articles concerns juvenile chimpanzees and demonstrates that while males will use short sticks as a weapon, females carry them around—just like young human girls play with dolls. According to Wrangham, this is the first example of a non-human using something as a doll.

This example of “imaginary play,” as Ross referred to it, requires that data be collected over a long time horizon, meaning the forest must remain intact so the chimpanzees can thrive.

While they were not involved in Currier House life, the Masters acted on their deep ties to communities in Africa.

Wrangham’s need for Ugandan locals to conserve the forest provided the impetus for Ross’ founding of the Kasiisi Project, which began only at a single school but is now at 14 schools serving some 9,980 students.

“We do everything you can imagine to help primary schools,” Ross said.

According to Michelle A. Sirois ’12, who worked with the Kasiisi Project this summer, the project has taught students about conservation and has also improved literacy and initiated health and sanitary programs at local schools.

Caroline D. J. Riss, the interim field director for the Kasiisi Project, echoed Sirois’ statement about Wrangham and Ross’ presence in Uganda. Since they have been going to Uganda for over 20 years, sometimes with their three sons, they have an “unbelievable presence around Kibale National Park,” Riss wrote in an email. “Dr. Ross and Professor Wrangham cannot go anywhere without being stopped by villagers, researchers, friends and acquaintances for greetings and thanks.”

Emily Otali, the project manager of the Kibale Chimpanzee Project who named her daughter after Ross, was a former Ph.D. student of  Wrangham’s and is now chair of the Scholarship Committee for the Kasiisi Project.

According to Otali, “Richard is the more quiet person and leaves Elizabeth to deal with everything,” but the local Ugandans say that Wrangham is the most “honest white person ever.”

Machanda said that Wrangham and Ross are very relaxed when they are in Uganda.

“He kind of lets it go a little bit. We’ll just have beers on the front porch and we can watch the animals go by,” Machanda said. “You can see their stress levels decrease,” especially Wrangham’s.

Although Ross is very busy managing the Kasiisi Project while she is in Uganda—“going to schools, meeting with parents and scholars, checking out the accounts, supervising and appraising all the project’s activities,” Otali wrote—she makes time to cook, and do “girly things,” like getting pedicures and dinner with Otali.

Locals come to Ross to ask for help, usually asking for money, and though Ross cannot give money to everyone, she does her best to help when possible, Otali wrote.

For Wrangham, “the single most exciting experience was living with the hunter-gatherers for 10 days.”

In Tanzania, Wrangham lived with a group of hunter-gatherers called the Hadza and worked on filming a documentary, as they are the last hunter-gatherers whose way of life has remained intact over the years.

Although Wrangham said it is always hard coming back from sabbatical, where he got to set his own agenda, “it is wonderful being back in every way.”

Wrangham and Ross said that the first two years as House masters were a steep learning curve, but coming back now was familiar.

Before their departure, Wrangham and Ross introduced Cavallaro and Marques at open houses and a stein club.

While on sabbatical, Wrangham and Ross were not completely removed from House life. They maintained a blog for their Currier students and returned for commencement.

“We wanted to say goodbye to our seniors,” Wrangham said.

Those in the House said they were thrilled that Wrangham and Ross returned this year.

“I love having Richard and Elizabeth here,” Alex J. Breinin ’12 said. “I love hearing about their experiences in Africa and back home in Europe.”

Chris W. Danello ’12 agreed that it is nice to have Wrangham and Ross back in Currier, and said that the transition was aided by the fact that, “We have the best house administrator at Harvard.”

Danello, though, had another reason he was glad Wrangham and Ross were back from sabbatical.

“The other difference in having Richard and Elizabeth back is I hear a lot more about chimpanzees at dinner,” he said, “And, frankly, as a college student, that helps me understand my roommates a lot better.”