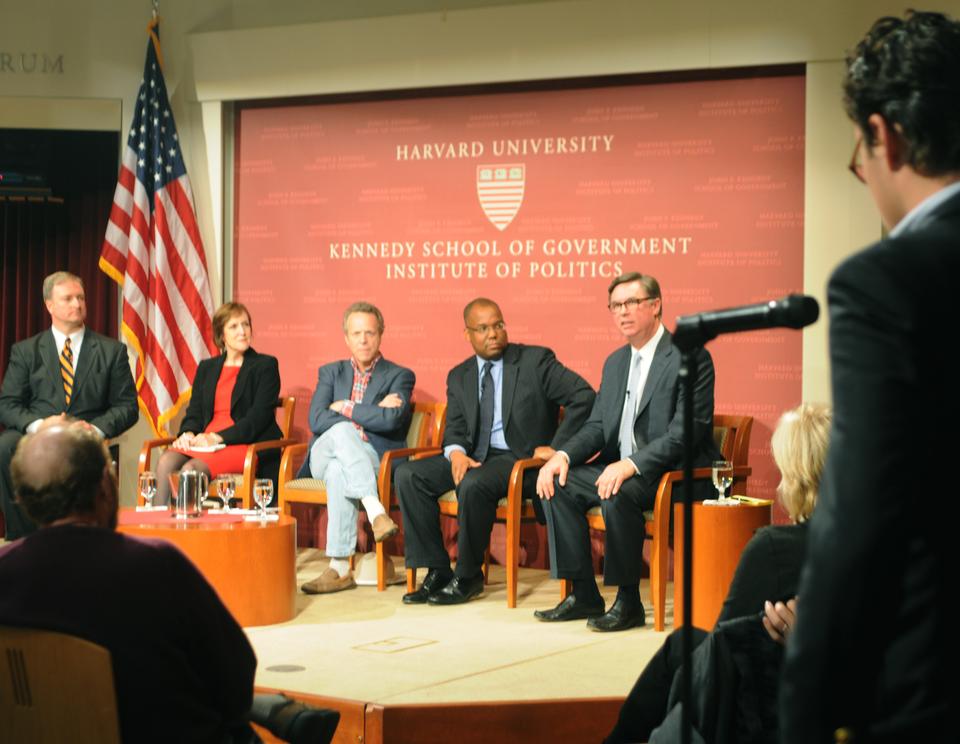 Harvard Institute of Politics holds a forum called “Campaign 2012: How Americans Will Select Their Next President,” which focus on the possiblity of a third party option in the upcoming presidential election.
By Dillon van Auken, Contributing Writer

A third party candidate might have a much better shot at winning the 2012 presidential election than most citizens believe, experts in campaign media and communications said at the Institute of Politics on Monday.

The speakers identified Americans’ growing discontent with Washington partisanship and gridlock in Congress as factors that make a third party ticket more viable.

“People always say about a third party when we bring this up, ‘Oh, this isn’t going to happen,” said Mark McKinnon, former chief media advisor to President George W. Bush’s campaigns and a fellow at the Harvard Kennedy School. “Just because it hasn’t happened in American politics doesn’t mean it won’t now.”

“It feels like the center of gravity of politics has changed,” Tumulty said.

She noted that the Consumer Confidence Index, which measures citizens’ outlook on the economy, is currently at a low which it last reached in 1980 and 1992—both years in which an incumbent president was thrown out of office.

Each of those years also saw campaigns by significant third party candidates: John B. Anderson in 1980 and H. Ross Perot in 1992.

But McKinnon said that a 2012 third party option might fare even better than Perot, who garnered 19 percent of the popular vote in 1992, because confidence in government today is lower than it was 20 years ago.

A recent poll by New York Times/CBS found that 89 percent of Americans say they do not trust the government.

Kahlil Byrd, CEO of an organization called Americans Elect which hopes to put a third party candidate selected by online pollees on all state ballots in 2012, pointed out the increasing influence of technology on elections.

Byrd, a 2003 Kennedy School graduate, identified ballot access as the most significant barrier for prospective third party candidates. By helping nontraditional candidates overcome this barrier, he said he hopes Americans Elect will lead many more citizens to seriously consider a presidential run.

David M. Hafferty ’13, who leads a Harvard branch of Americans Elect, said he hopes to extend the organization’s prominence on campus by sending emails and speaking to students.

“This panel got me thinking there may be some better way to elect our politicians so we aren’t as frustrated in the future,” said Jackson F. Cashion ’13, an IOP Forum staffer who is also an inactive Crimson editor.

McKinnon forecasted that more candidates who have not yet declared their intent to run will still join the 2012 presidential field.

“I think a lot of interesting people are going to show up.” said McKinnon.