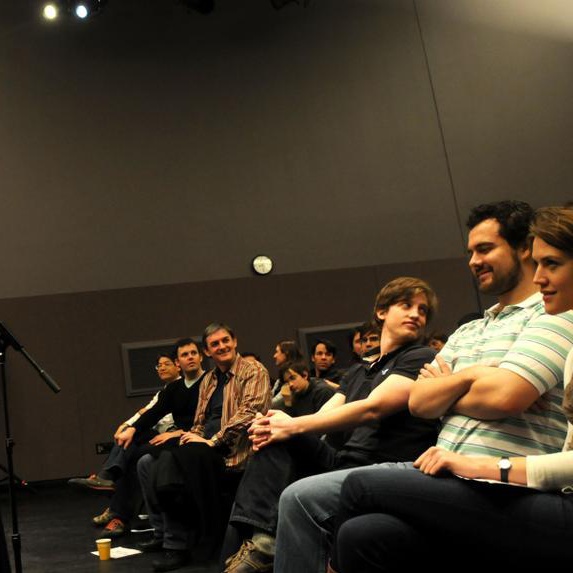 En route from the United Kingdom to the Philippines and Japan, the Tierney Sutton Band made a stop to grace the stage of Sanders Theatre last Friday—a prelude to a celebration of 40 years of jazz at Harvard presented by the Office of Arts at Harvard (OFA). Last Thursday, preceding their Friday night concert, the Tierney Sutton Band and their eponymous vocalist led a small master class in the New College Theatre for several Harvard undergraduates and other jazz admirers. This Harvard master class and public performance represented a joint collaboration between the OFA and the Celebrity Series of Boston. During their visit to campus, the Tierney Sutton Band performed some of their hit songs while sharing their distinct jazz philosophy.

In her master class, Tierney Sutton incorporated her voice as another instrument in her jazz ensemble, never once considering herself as above the talents of her instrumentalists. This attitude was embodied to the fullest at Sanders Theatre on Friday evening—the band’s cooperation showing itself brilliantly in their performance.

Throughout the evening, vocalist Tierney Sutton, pianist Christian Jacob, bassist Kevin Axt, and drummer Ray Brinker sat within arms reach of each other, embodying their philosophy of playing with rather than next to each other, as well as representing over seventeen years of arranging together. Though the ensemble was small, they had no trouble filling Sanders’ large performance space.

The performance was in all respects a beautiful collaboration. Sutton’s versatile solo in the band’s second piece gradually softened and receded into the heart of the instrumentalists’ rising melody, but her body language nevertheless expressed her continued participation with the band. Each musician had several moments during the performance to shine, with the band exploring nearly every combination of solo and group melodies.

A somewhat unusual development during the band’s performance was a series of jazz pieces addressing the less romantic aspects of love: an odd contrast to February’s Valentine’s Day and the band’s positive stories from their nearly two-decade working relationship. However, the evening’s tone lightened toward the end of the show with upbeat rhythms and whimsical lyricality. Rarely did Sutton miss an opportunity to express her admiration and appreciation for her fellow band members, insisting that, in her opinion, they are truly among the very best jazz instrumentalists in the world.

The Tierney Sutton Band performed at Sanders Theatre at the invitation of The Celebrity Series of Boston—whose staff contacted Harvard’s Learning From Performers Program Manager Thomas S. Lee about the idea of a Harvard master class on jazz performance. “I jumped at the chance because … we’ve done a lot of work with jazz artists over the years [but] haven’t had many jazz vocalists—that was something that really appealed to me,” Lee said.

Lee invited several Harvard undergraduate jazz musicians to participate in the Thursday evening master class. Upstairs in the New College Theatre, Sutton and the band explained their philosophy behind jazz performance as well as some of their techniques and methods for playing together. Between each piece played by the undergraduate ensemble, the visiting artists offered their advice on how jazz ensembles can collaborate.

“I really appreciated how she allowed herself to immerse herself in the rest of the band”, said Andrew S. Kennard ’13. “I got a different take about what it means to play with a vocalist. They play as a unit. It was a different perspective.”

Although the two jazz ensembles only had a limited amount of time to play together, student vocalist Samara R. Oster ’13 described how their evening together gave her a chance to reflect on her own jazz style. “I think the different things she brought to the master class, talking about pitch and dynamic … helped me take into consideration [what] I wanted to take from her advice and put into my singing regularly,” Oster said.

The Tierney Sutton Band’s visit to campus comes just a few months ahead of the OFA’s “40 Years of Jazz at Harvard: A Celebration” from April 7-10. The OFA will host the return of previous visiting jazz musicians for three days of commemoration, conversation, and music. Collaborating with the OFA to bring students and jazz musicians together, the Tierney Sutton Band has prepared Harvard for a celebration that is a part of a growing history of honoring jazz on Harvard’s campus.