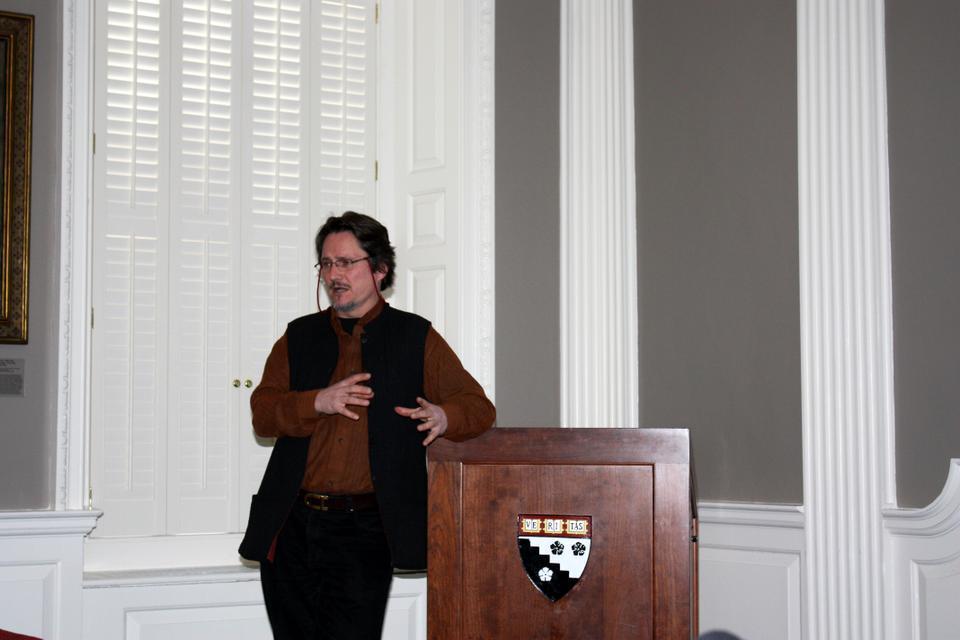 Creating an effective documentary is a decidedly difficult task; one must carefully consider both the story and its intended audience, and along the way, balance the variety of perspectives that comprise the finished product. In 2009, documentary filmmaker Michael Sheridan attempted this complex undertaking, and worked to capture on film the true conditions of war-stricken Afghanistan. To achieve a more realistic representation of the underdeveloped nation, Sheridan trained a group of Afghani students in the art of documentary filmmaking, so that their stories could be told in their own voices.

On February 17, Sheridan visited Harvard to discuss this project in a talk at the Harvard Graduate School of Education (HGSE). Introducing the filmmaker was Scott Ruescher, Program Coordinator for HGSE’s Arts in Education Program. Ruescher praised Sheridan’s work: “ [it] engages with public stories, challenges the status quo, and attempts to improve lives,” he said. These characteristics certainly describe Sheridan’s work in Afghanistan, which focused on providing locals with a solid education in effective visual storytelling.

When embarking on his journey, Sheridan knew which types of students he most wanted to teach. “I was looking for people who were in careers which already involved telling a story, such as writing, journalism, or broadcasting,” he said. In search of local men and women with diverse perspectives, Sheridan launched a five-week intensive documentary training program with a crew of local experts. “I was the only person not from Afghanistan,” he said, a fact he felt added legitimacy to his endeavor.

To recruit this team of locals, Sheridan, aided by a translator, conducted a series of interviews with Kabul natives. Sheridan was pleasantly surprised with the turnout he received for the interviews, particularly since the development of artistic ideas can be difficult in a society as restrictive as Afghanistan’s. In fact, one individual’s tale of just getting to the interview seemed worthy of a documentary in itself. “There was this one guy who tried to get to us by train and then car, but he encountered a land battle on his way in. He had to return home to rent a motorbike in order to ride over the hills to reach us.” The personal stories that emerged even before the training started underscored for Sheridan the significance and impact of his project.

Yet creating a documentary is never easy, even with a plethora of fascinating stories at one’s disposal. “The five weeks were intense,” said Sheridan, “especially since a number of the men and women had never even turned on a video camera.” The training covered all of the technical knowledge needed to make a documentary, including how to frame, capture, edit, and most importantly, add sound to film. “80% of good storytelling is in the ears,” Sheridan said.

To help his students develop their storytelling abilities, Sheridan devised a set of creative exercises, such as filming people playing cards. “We edited their raw footage together overnight, so they could see how their shots moved together and how what they were filming could be turned into a real story.” The education was meant to empower Sheridan’s students to become better storytellers as the days progressed.

As their skill in crafting cinematic narratives developed, Sheridan encouraged his students to reach out to one particular area of society restricted to him: women. “There would always be a missing subject in any of the films I made—women,” he said. Understanding the need to build strong relationships with other townspeople, the students formed bonds with women in their villages, eventually capturing some of their unique perspectives on film. In this way, Sheridan’s students achieved something that the Western filmmaker could only have dreamed of doing: getting to the heart of the issues that face Afghani people of all backgrounds.

To celebrate the completion of the film collection, Sheridan held a screening in Kabul. “Entertainment is severely limited in Afghanistan, and this event represented a brand new opportunity for many people in the area.” During his talk, Sheridan screened some of the movies, each conveying a compelling perspective on life in Kabul.

The films prompted audience member Julia Van Dyke  to inquire about the possibility of Sheridan attempting similar projects in the future. “Do you see this vision being played out in other countries?” she asked Sheridan. “My mission is to work with the model in other developing places, such as Somalia,” the filmmaker replied. “But when I returned from Afghanistan, I was exhausted just keeping this project going,” he said. Given the scope of Sheridan’s endeavor, a little fatigue is understandable. Documentary filmmaking is, in itself, a challenging task; to combine practical technical education with culturally-meaningful storytelling represents an even more formidable accomplishment.