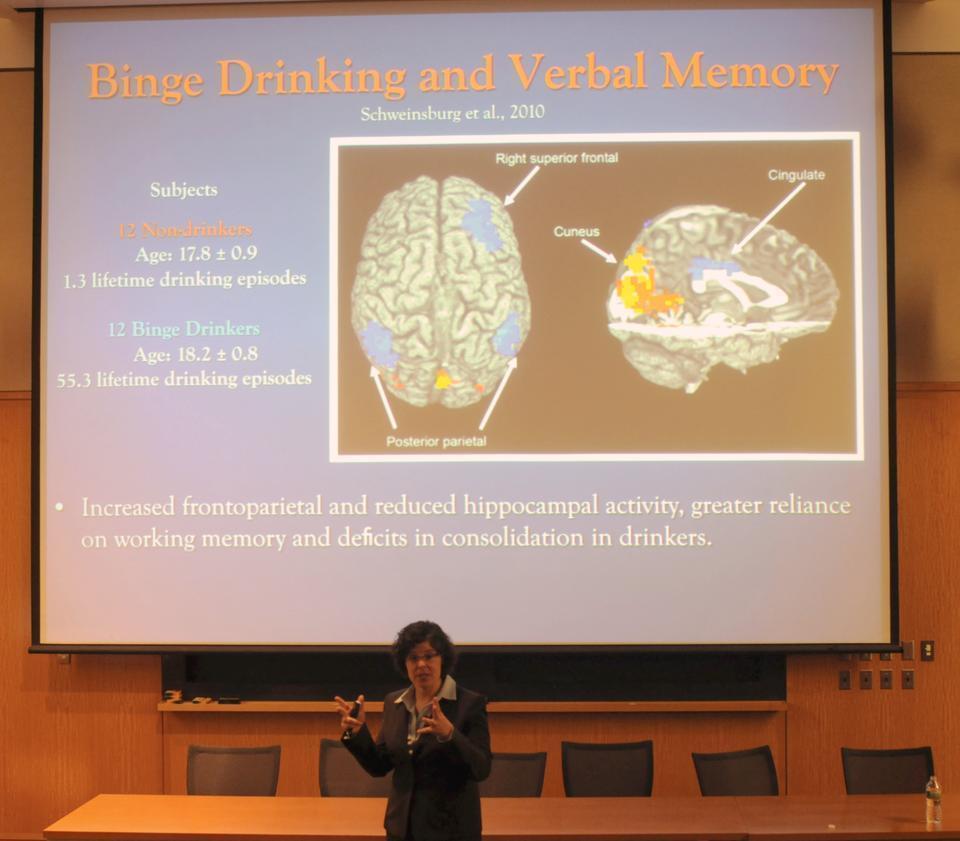 Dr. Marisa Silveri speaks about the influence of GABA, a neurotransmitter that affects impulsivity, on binge drinking.
By Candance B Samuel, Contributing Writer

Silveri’s lecture elaborated on the most startling effects of alcohol consumption on the adolescent brain, ranging from a potential 10 percent reduction in memory function to a heightened risk of alcoholism.

“It’s a no-brainer that alcohol will affect brain development,” she said.

The increased vulnerability of young adults to alcohol-related brain damage coincides with an increase in alcohol consumption rates of over 70 percent between ages 13 and 23—a confluence of circumstances Silveri called “ironic.”

She cited several key factors as putting young adults, particularly college students, at increased risk for alcohol abuse, the most notable of which was increased impulsivity and reduced decision-making abilities.

“Most adults use signs of drowsiness or disorientation to know when it’s time to stop drinking,” Silveri said. “It takes adolescents a lot more alcohol to get to that point.”

Silveri added that cultural and societal factors may also have a “significant” influence on drinking habits.

“There is a big psychosocial component to all of this that we cannot capture in our experiments,” she said.

The lecture, which attracted approximately 20 students yesterday evening, was part of the College’s continuing efforts to educate students on the risks of alcohol overconsumption.

Student admissions to University Health Services for alcohol-related reasons have risen in recent years: the number of students admitted to UHS due to alcohol last semester almost matched the total number of cases for the entire previous year.

College and UHS administrators have refused to release alcohol admittance statistics for 2010, citing College policy, even though the Office of Alcohol and Other Drug Services released the total number of students admitted to UHS due to alcohol—102—in the fall of 2009.

Despite a slew of somber statistics, Silveri also outlined the plethora of opportunities for intervention. For example, the brain’s regenerative abilities in conjunction with extended periods of abstinence from alcohol allow the brain to recover from the worst effects of binge drinking, she said.

Nonetheless, Silveri emphasized the necessity of education as the central mode of abuse prevention.

“We are at the point where we can show damage to the brain,” she said. “That is a lot more convincing than just showing a bunch of slides with cells.”