The Class of 2015 receives a rainy welcome to campus. 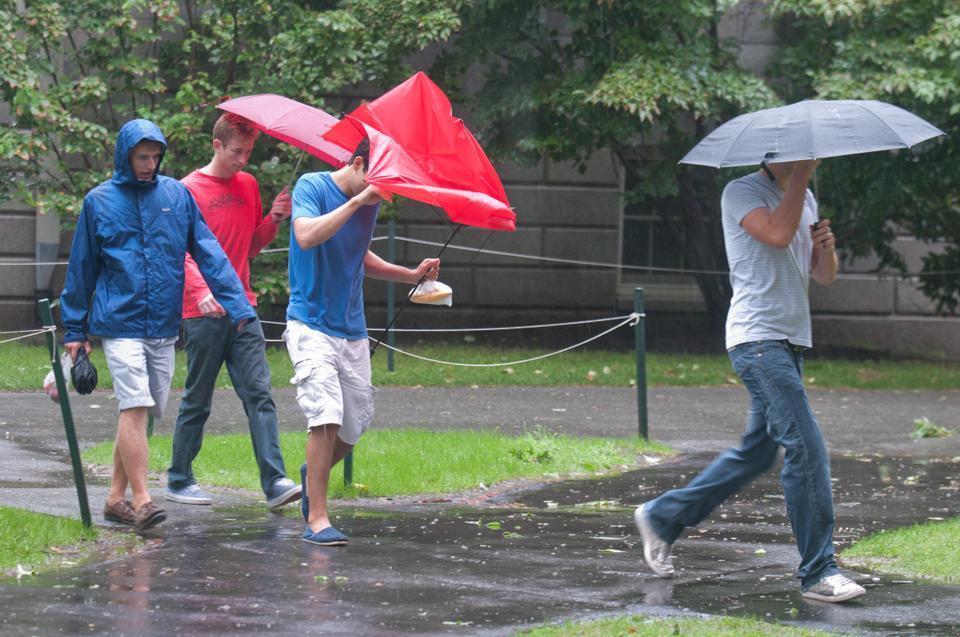 Students travel through the Yard outside Widener library after the heart of the storm passed.
By Julie R. Barzilay, Crimson Staff Writer

The classic trifecta of freshman conversation starters (Name? Dorm? Hometown?) expanded to include a few Irene-related inquiries this weekend when the hurricane led to the postponement of several Opening Days events. In particular, with the cancelation of the annual First Chance Dance, the question of the hour became: “what did you do instead of the dance?”

Keenan Monks ’15 and Tyreke White ’15 rose to the challenge and hosted a “No Chance Dance” in Thayer Common Room on Saturday night, with close to 30 first-years from several dorms dancing and playing pool in the basement.

Upstairs, Erik Olsen ’15 said that there were many mellower alternatives, including a “‘Modern Family,’ Apples-to-Apples, and cookies study break” thrown by his proctors as the winds roared outside.

Proctors in Holworthy funded snacks for another “No Chance Dance” incarnation, which Nicholas Merrill ’15 said migrated upstairs after the basement grew too crowded and hot.

“We wrote to all the proctors and urged them to come take out games and DVDs. We had a run on ‘The Office,’” Dean of Freshmen Thomas A. Dingman ’67 said. “The class was terrific in terms of showing their understanding and resourcefulness, and people seemed to be creating their own entertainment.”

The First Chance Dance has not yet been rescheduled.

Elliot A. Wilson ’15 said he and his friends braved the pre-hurricane rains to take a mini “dorm tour,” visiting friends in Weld, Lionel, Pennypacker, Grays, and other dorms. He noted that the friends were a combination of suitemates, Dorm Crew friends, and students who met through Google+ before school started.

“We also went on a bridge across the Charles and saw that the sky was actually green,” he said, which confirmed tales he had heard of the sky turning green before a hurricane.

Kate Haveles ’15 and her suitemates, who waited with hordes of students to get into the Freshman Arts Pageant on Saturday, planned a movie marathon in Lionel instead of the Dance, which she said was “kind of a bonding experience for our dorm.”

Though the annual Sex Signals presentation was postponed—tentatively rescheduled for sometime next week—many Opening Days events went through as planned, like salsa dancing lessons, cookie-decorating parties, and “Glee” screenings.

“We did a survey of the freshmen last year and used the results of that to fine-tune the program,” Dingman said. “[Opening Days Committee co-chairs] Katie Steele and Laura Johnson have had their ear to the ground a lot, and I think the program has only gotten better even though the weather threw a real wrench in our plans,” he added.

The week has also been filled with Boston exploration, party-seeking, and first-time experiences for many first-years.

“I ordered my first Starbucks this week,” said Haley Adams ’15, who hails from a small town in Illinois with a population of 7,500. “And every day here, I meet 50 new people. Everyone’s so nice and interesting.”

This weekend’s weather sent several seniors into bouts of nostalgia as they recalled their infamous freshman year move-in blackout, in which stormy weather knocked out power and necessitated an impromptu slumber party in the Science Center.

“They were showing ‘Top Gun’ in the auditorium, and there were tons of kids wandering around in huddles,” recalls Collin A. Jones ’12. “We were freshmen, we moved in masses.”

“I think it gave us something to talk about the first week,” said Elliott J. Rosenbaum ’12. “And it’s funny for us coming totally full circle now, moving in during a weather crisis.”