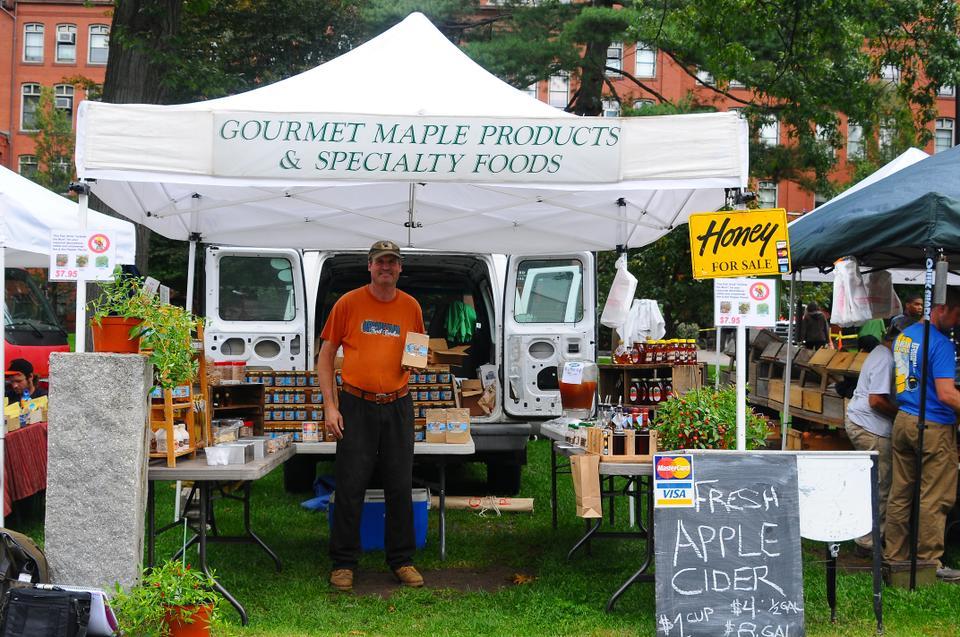 Walking through the rows of booths selling everything from organic eggplants to locally-made chocolate, Stefanie Chorianopoulos ’15 munches on an apple from Ward’s Berry Farm on her way to lecture in Northwest Labs. Chorianopoulos, who grew up near the farm’s Sharon, Mass., location and remembers going apple picking there as a child, buys a small bag of apples from its stand at the Farmers’ Market at Harvard each week.

With vendors offering products including produce, maple syrup, and local seafood, the Farmers’ Market held each fall has become an opportunity for Harvard University Dining Services to reach out to smaller farms.

Begun as a project of HUDS and the HUDS Food Literacy Project, the Farmers’ Market at Harvard opened in 2005, with its sister market held in Allston on Fridays beginning three years later.

The construction on the Science Center Plaza this fall has temporarily moved the Cambridge-location to a spot in front of the Harvard Museum of Natural History on Oxford St. Despite a drop in foot traffic each Tuesday, vendors, students, and market organizers say that the event provides an opportunity to make connections between students and local farmers too small to be vendors for Harvard’s dining halls.

“We try to have a good mix of vendors, creating a good environment for the consumer,” says Louisa C. Denison ’11, the Food Literacy Project coordinator.

“FACE TO FACE WITH A FARMER”

Over the past decade, HUDS has increasingly focused on offering local foods—which it defines as from within a 250-mile radius of Cambridge—in its dining halls and on-campus restaurants. But with 13 undergraduate dining halls, 14 retail dining locations, and its own catering operation, HUDS must rely more on suppliers able to provide for such a large-scale operation.

These two competing priorities have often made it difficult for smaller local farms to have a presence in Harvard’s ecosystem. The two farmers markets provide this opportunity for vendors to sell products that they could not provide on such a large scale to Harvard’s more institutional dining services.

For example, Ward’s Berry Farm has provided squash to Harvard’s dining halls, but sells a wider range of produce at the weekly farmers’ market.

Other regular vendors at the market include Lanni Orchards, a farm in Lunenburg, Mass.; When Pigs Fly, a bakery in Somerville, Mass.; and Cape Ann Fresh Catch, a fishery based in Gloucester, Mass.

Dave J. Purpura, the owner Plato’s Harvest Organic Farm in Middleboro, Mass., is the only organic produce vendor at Harvard’s Farmer’s Market. He owns a farm that is not at the size or scale where he can wholesale food. Harvard’s market is one of only two that Purpura attends each week.

“I like to tell people how to do things,” Purpura says as he explains the best way to eat some of his produce to another customer. “It’s all about being able to talk to the person. They’re paying the person that made their food. It’s not going into some corporate hole.”

Vendors pay a nominal fee to participate in the market for costs like landscaping, city permits, and advertising, but apart from that, anything else the vendor makes is his own.

“There is no middle man,” Denison said.

This direct connection between seller and customer has made the Farmers’ Market appealing to both sides.

“I think it’s pretty cool because that makes it accessible to students and postdocs like me who are too busy to go shopping,” Kathryn E Goldfarb, a postdoctoral fellow, based in nearby CGIS, says.

The farm-to-table aspects of the farmers’ market system is similarly important for Dale Wentworth, who worked in the business sector before starting The Warren Farm & Sugarhouse in North Brookfield, Mass., nearly two decades ago. At the Harvard market, Wentworth sells the farm’s maple syrup, which he has learned to preserve and make a year-round crop.

“The Farmer’s Market concept works so well because you get to be face to face with a farmer,” Wentworth says.

The small farms that participate in Harvard’s weekly markets introduce students and staff in Cambridge to the wider offerings available locally. The Farmers’ Market tries to showcase, through its products and vendors, Harvard’s distinct New England location.

“[We try to show] what diverse products Massachusetts has,” Denison says.

Denison describes it as a “nice reminder” that we live “in the midst of a fairly agricultural region,” she says. “It’s a very physical, tangible reminder.”

“It feels like some of the local culture is brought to me,” Nicole C. Hirschhorn ’16 says as she eyed the Sicilian Green Olive & Hot Cherry Peppers bread at the When Pigs Fly tent.

The local food offered at Harvard’s markets is a chance for Harvard affiliates to connect more closely with their food than they could in a dining hall or grocery store, vendors say.

“It gives people a greater understanding of where their food comes from, in a completely basic sense,” Wentworth says.

From June to October, the Farmers’ Market has become a staple for many at Harvard.

“I wish it was every month,” Christine S. Benoit, a procurement manager at the Faculty of Arts and Sciences Finance Office said. “I have it on the calendar. My coworkers definitely come down here all the time. The fridge is always full on Tuesday.”