‘Blonde’ Has All the Fun 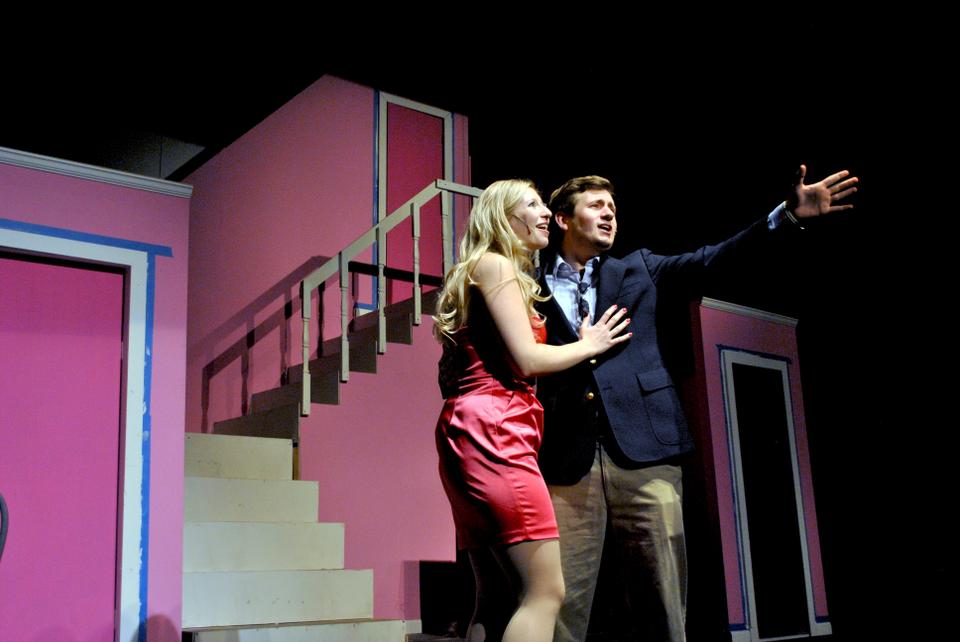 “All that pink you’re wearing…is that even legal?” asked Vivienne Kensington, a condescending Harvard Law School student, and a character in “Legally Blonde; The Musical.” The Law School and its stereotypically drab student body would prove to be no match for the effervescent and stylish Elle Woods, the main character in the show. The Harvard-Radcliffe Dramatic Club’s rendition of the popular Harvard tale—which was directed and choreographed by Haley L. Bennett ’13 and Alex M. Willis ’14—provided a farcical view one of the country’s most prestigious academic institutions. The production, which ran from April 12 to April 15, boasted a strong cast that, through the actors’ energetic performances, poked fun both at Harvard’s status and at the stereotypical “dumb blonde.” This self-awareness factored heavily into the production’s overall success, despite a number of technical setbacks during the show.

“Legally Blonde: The Musical” follows vapid sorority girl Elle Woods (Lily R. Glimcher ’14) as she journeys from the steps of UCLA’s Delta Nu house to the hallowed halls of Harvard Law School to win back her one true love, Warner Huntington III (Adam J. Conner ’14, a Crimson business editor). With the help of her friends, Paulette (Amy K. Sparrow ’15) and Emmett (Anise Molina ’14), Woods soon finds that she has what it takes to win a murder trial and succeed in one of the nation’s best law schools. “What, like it’s hard?” says Woods nonchalantly when reminded of the difficulty of gaining admission to Harvard.

The ensemble as a whole was nothing short of excellent. The cast’s strong vocals enhanced the already engaging script, and bright, airy songs set the tone for the show. The portrayal of Woods’ law professor by Eric Padilla ’14 was particularly impressive: he was able to convincingly imitate the demeanor of a morally reprehensible and egomaniacal lawyer while still delivering one of the best vocal performances in the production. Padilla, Sparrow, and Molina gave distinctly inspired performances—so much so that they overshadowed Glimcher—the lead—for most of the show. But it was the collective strength of the cast that made the production flourish. In addition to stellar vocal numbers, the cast also succeeded in translating the humor in the musical from the script page to the main stage. The combination of perfect comedic timing and an element of self-deprecation—think Harvardians in tweed jackets with English accents—provided a whole slew of jokes that brought the house down.

The show also boasted a tremendous amount of energy, which was due in part to Bennett and Willis’s choreography. Musical numbers like “What You Want” and “Whipped Into Shape” required a large number of actors to complete a complex series of steps in unison—a challenge that the cast not only executed, but knocked out of the park. In “Whipped Into Shape,” jailbirds and exercise junkies performed an intense workout routine and jumped ropes with militaristic precision. The perfect execution of this choreography added to the fun of the production and ratcheted up the energy to the musical without making the action seem too chaotic. Not all of the energy came from the dancing: the show also includes real dogs in the production. Dakota Allen (Woods’ dog Bruiser) and Molly Yum (Paulette’s dog Rufus) never ceased to excite as they ran across the stage and dutifully play their parts as attentive and cute canine companions.

Though the cast gave a rousing performance, an element of this achievement was lost due to microphone issues and sometimes clumsy transitions between scenes. It was difficult to hear some of the dialogue between Woods and Huntington in the beginning of the production, so elements of the not-so-tragic breakup of the two were completely lost. On more than one occasion, one of the walls of the set crashed against something on stage during a scene change—mishaps that, although they did not interfere with the action on stage, did prove to be distracting.

“Legally Blonde: The Musical” was a fun and funny reboot of the movie with the same name. An excellent cast, adorable dogs, and well-coordinated jump rope routines allowed the HRDC’s production to bring Woods’ sparkle and shine back to Harvard, and liven up her journey toward becoming, as she says, “someone serious, someone lawyerly—someone who wears black when nobody’s dead!”

—Staff writer Charlotte D. Smith can be reached at charlottesmith@college.harvard.edu