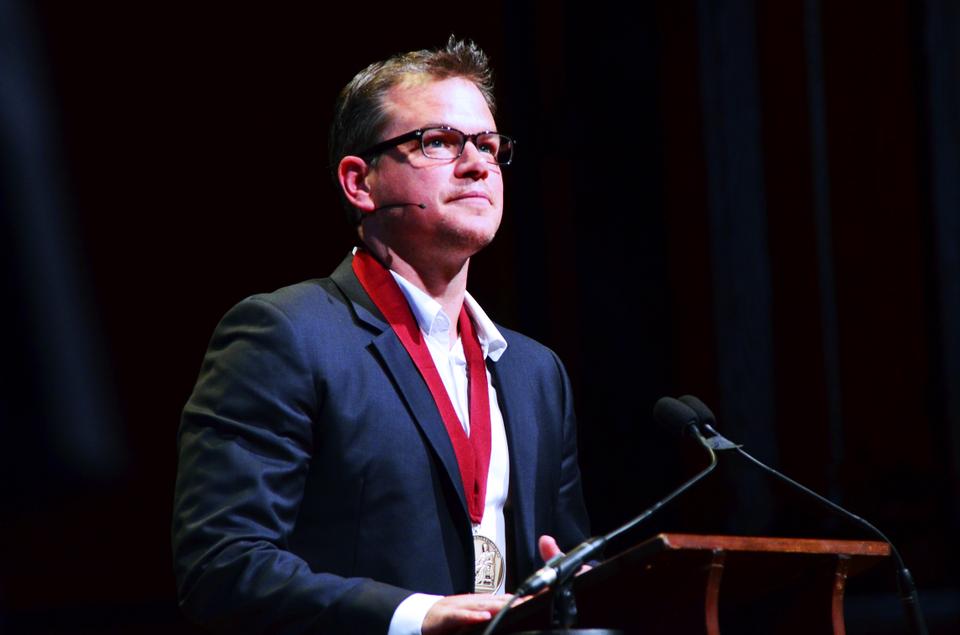 Matt Damon ('88-'92) expresses his gratitude towards being awarded the 2013 Harvard Arts Medal at the kickoff event of ArtsFirst Weekend in Sanders Theater on Thursday. Damon, esteemed actor and philanthropist, was interviewed about his undergraduate life, dramatic career, and nonprofit by John Lithgow '67, the founder of ArtsFirst and well-respected actor.
By Gina K. Hackett, Crimson Staff Writer

Speaking before a Sanders Theatre crowd on Thursday, Academy Award-winning actor and filmmaker Matt Damon, a Cambridge native formerly of the Class of 1992, said he was glad to be home in the wake of the Boston Marathon bombings.

“Particularly right now, it’s good to be back in Boston,” Damon said.

Damon came to Harvard Thursday to accept the 2013 Harvard Arts Medal at a ceremony marking the start of the weekend's Arts First festival.

In a conversation with fellow actor and Arts First co-founder John A. Lithgow ’67, Damon regaled the crowd with stories of his start in acting and screenwriting, partially attributing his success to his local upbringing.

“I’m really proud to come from here,” Damon said. “Of all the accolades and movies and all that stuff, whenever someone says my name, they say the name of this university too, and that means a lot to me. I’ve always tried to live my life in a way that honored that and a way that deserved that.”

Damon grew up in Central Square and attended Cambridge Rindge and Latin School—the same high school that Dzhokhar Tsarnaev, one of the alleged marathon bombers, also attended years later. Damon went on to attend Harvard, and before dropping out to pursue his acting career, wrote the first draft of the screenplay for the film “Good Will Hunting” in a Harvard playwriting class.

Lithgow, who introduced Damon at the start of the ceremony, also acclaimed Damon’s local ties.

“He is a child of Boston,” Lithgow said. “The fact that he’s here at this particular moment in Boston’s history makes his visit this year particularly poignant.”

“As we feel inspired by the people in Boston and by the power of the arts to heal and renew us, we are especially grateful for the wonder of our ongoing dialogue with Matt Damon on and off the screen,” Faust said.

A committee of faculty, alumni, and administrators nominated Damon for the award on account of his acclaimed acting career and his efforts to use his success in the arts to serve others. Damon is a strong advocate for improving water quality worldwide, reforming education, and finding a cure for AIDS.

Attendees said they were impressed by Damon.

“He’s a really humble guy,” Yacoub H. Kureh ’13 said. “The way he talks about philanthropy, you can tell it’s not something he just does on the side, like some other celebrities.”

Suvai Gunasekaran ’13 agreed, saying, “you could really tell how much he cared about the Boston community.”

As the crowd exited Sanders after the ceremony, student volunteers collected donations for people affected by last week’s violence in Boston.