Reflections on the Boston Bombings and Manhunt 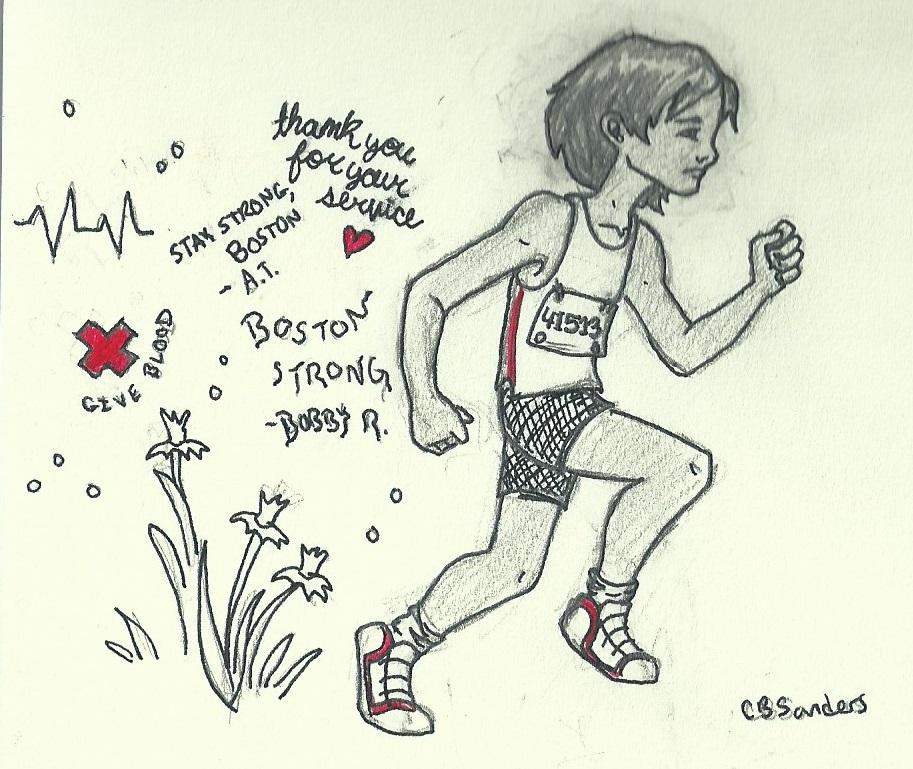 This piece is part of a series of online-only Roundtables. This new content form from The Crimson Editorial Board seeks to present a diverse array of high-quality student opinion on thought-provoking issues.

Why Our Country is Great

When I first learned that the suspects of the Boston Marathon bombings were young, white men, I was secretly happy. With images of bearded, dark-skinned Arab men often associated with terrorism, the captured paler faces were a breath of fresh air amid a very tense week.

However, when news surfaced that federal officials did not read the 19-year-old suspect Dzhokhar Tsarnaev, a naturalized American citizen, his Miranda rights before interrogation, I was disconcerted.

Beyond their respective weapons of choice, reported religious views, and mental health statuses, with the first being the only truly known fact in the case of Tsarnaev—not much.

Neither Lanza's or Cho's shooting sprees were ever labeled "terrorist attacks," yet the bombings that Tsarnaev and his brother are suspected of have been labeled by officials in all levels of the U.S. government, including even the president.

Yes, Tsarnaev and his brother are guilty of the bombings, and yes, they probably intended to inject terror into the national pulse. However, when the deeply American ideal of "innocent until proven guilty" is quickly swapped out for precarious reasons such as the possibility of an affiliation with fundamental religious views, I wonder whether we really are living out the spirit of what we were patriotically chanting at the first Bruins game after last Monday's tragic events: "U.S.A."

By refusing to read Tsarnaev's Miranda rights, the federal government not only risks the possibility that Tsarnaev's pre-Miranda confession may not be permissible in court, but it also further perpetuates the inconsistent use of the term "terrorist" by both the government and the media.

In the midst of sporadic MessageMe notifications and discontent with the Harvard administration, we should also critically examine the actions of our federal government throughout the affairs of last week. Just as the critique of Harvard's conduct was not wholly negative, we can still praise the efforts of the first responders and service men and women while criticizing other decisions by the government. And just as we Harvard students rose to fill in the gaps of our school's response, we too can also fill in the gaps of our nation's discourse about last week's events by engaging and challenging each other in conversation and actively fighting against negative stereotypes and for American rights.

This is more than a politically correct correction of terms. This is a defense of what makes this land so great. America became #BostonStrong to stand in solidarity for its country and countrymen. Let us also stand as one for its values.

Ruth Fong ’15 is a computer science concentrator in Mather House.

Terror Through My Lens

“Explosions at the Marathon. Boylston. You okay?”

With that short text message, my Monday afternoon took a dramatic turn. From over 3,000 miles across the continent, my father was the first to fill me in on the horrific events that were disrupting the 117th Boston Marathon. I replied quickly, letting him know that I was safe, and then immediately drove a Zipcar toward Copley Square.

I have been taking photographs for a long time and have been a photographer for The Harvard Crimson for nearly two years. The familiar grid of my viewfinder lends order to my surroundings. Photography helps me relax. But on Monday, April 15, what I saw through my camera didn’t feel the same.

As I got out of my car, I saw shock on the faces around me. I scanned the crowd, and my lens focused on a pile of bloodstained clothes, the gaunt face of an older runner, the empty gaze of a young child. I soon reached the police line, and my camera caught the glance of a state policeman, a carbine rifle held close to his breast. As I held down the shutter, under the stiff brim of his hat, I caught a glimpse of fear in his eyes.

I continued to take photographs as the events of the week unfolded. When Governor Patrick announced the capture of those responsible, I was at the press conference. Later, when drunken college students descended upon Boston Common to celebrate the capture, I was in the middle of the crowd. But even then, as Celtics flags rippled in the wind and chants of “U.S.A.!” rose and fell, the view through my camera was not quite as ordered as before.

I am lucky to not count any friends among the injured or deceased, but I did not come out of last week unchanged. For me, the memory of an extraordinarily emotional week returns each time I bring my camera to my face. Though his image is fading, I still see the fearful eyes of the state police officer in Copley Square, and I understand the meaning of terrorism.

Mark Kelsey ’15, a Crimson multimedia executive, is an economics concentrator in Cabot House.

I was a witness to the hunt for the Tsarnaev brothers as both a potential victim and a horrified onlooker. I had originally planned to leave Boston to go to a conference in Chicago with Harvard's Intercollegiate Model United Nations team before the attacks, but weather delays resulted in my departure being rescheduled to 3 a.m. the night of the attacks. As I walked through a silent campus to the taxis in Harvard Square, I was incredibly grateful for the police presence I saw. The knowledge that someone nearby has both the motivation and means to kill you is a horrifying thought, and the presence of law enforcement was reassuring as I traveled to the airport.

Once I arrived in Chicago, I was greeted by an incredible display of concern and sympathy for the people of Boston. But I was also greeted by online op-eds and articles, notably by Harvard’s Stephen Walt. He argued that the response was too heavy-handed. Walt noted that the cost could be “about $1 billion” (although he later reported estimates of about $300 million) and lamented that a “19 year-old amateur could paralyze an entire American metropolis.”

I agree with his characterization of American counter-terror operations. When we set out to punish terrorism, we go the whole way, regardless of location— Boston, Afghanistan, Yemen, or Somalia. I would not want it any other way. It is precisely because we are such a great nation that terror impacts us so much. The security and peace American citizens enjoy is so great that an extremely zealous response is the only acceptable option to infringement upon them. Were we to punish terror less, it would imply that the freedom, peace, and lives destroyed in an attack on America are less valuable. The response that I saw the night of the manhunt was made precisely because Americans value security and peace so highly. To attack them is a terrible crime, and to protect them is an affirmation of their value.

We live in a bubble – one much larger than this campus, and even all of Boston. It is a pretense of safety that extends across the country, and one we manage to convince ourselves of each day. Each time we hear of conflict abroad that conveniently disappears or read reports of casualties 10,000 miles away, the bubble seems to spread its reach a bit further. We continuously and subconsciously make the assumption that we are safe and getting safer every day.

Now, however, that safety is shattered, our trust is torn apart. I’ve just begun to realize how much my wellbeing depends on the goodwill of those around me. Entering a crowded lecture hall or stepping into Harvard Yard is, in a way, becoming a target. It only takes one to kill, causing such chaos and tumult as we’re only just recovering from. And to make that bet—to chance the odds that everyone around you means no harm—is truly terrifying.

We make that bet all the time, though, and for the most part we come out okay. Last week was a terrible one for humanity, and one that we should never forget. But as we now reflect, this week can be a heartening one. This city has banded together beyond all expectation, and the nation has been ceaseless in its support. We give each other daffodils and share each other’s prayers. We cry and laugh and love, together. We help each other heal.

So thank you, policemen and protectors—you’ve done an incredible job, and we in Boston can’t praise you enough. But we all should thank each other, too. Boston is strong, but so is the rest of this beautiful country, and everyone in it. We protect each other—that’s what truly makes us safe.

Joseph Botros ’15, The Crimson’s technology manager, is a molecular and cellular biology major in Mather House.

Bring Out the Best in Boston

Shivering uncontrollably, the woman standing next to me trembled before collapsing onto the asphalt of Commonwealth Avenue.  All around me, runners violently shuddered and fell deliriously onto one another.  Screams of "medic" punctuated the endless stream of sirens on their way to Copley Square that were passing the crowd of thousands of dehydrated and exhausted marathoners that were trapped behind police barriers in the underpass underneath Massachusetts Avenue.  And then there were those crying.  Tears of terror for their families at the finish line just 8 blocks away, and tears of defeat as the word spread through the crowd that we would not be able to finish our first marathon.

Shock set in.  People began to jump barriers, some to seek out family members, others convinced that the thousand-strong crowd was the next target of a bomb.  Cell phones passed between runners along with nervous whispers of what was happening.  We were handed garbage bags to wear to attempt to keep warm.  Finally people began to walk through offering water out of pitchers into Dixie cups they had hastily grabbed from their bathrooms.  After an hour, we saw the crowd begin to move, with calls for those unable to walk to come to the side for bus assistance.  The crowd thinned by more than half as we walked over a mile to the buses with our bags, and to the area where we stood meekly by name, looking for our relatives.

Monday brought out the absolute best in every single person in Boston in many ways.  Standing in the crowd behind the police barriers, people from the nearby houses came down to offer us warmth, clothing, food and water.  Some even offered to take people inside who needed to make phone calls, while others with Verizon service moved through the crowd offering their phones to those who needed them.  Several runners themselves pulled off their outer layers to wrap the woman who had collapsed and huddled around her to keep her warm.  And on Berkeley Street, volunteers stayed behind to take care of the thousands of runners who began to pass through, dazed from the day's events, emotions running raw through their damaged muscles.  I will never forget the tears and terror that have since become a part of my everyday life, but I will also never forget the strength and resolve that the city of Boston has shown to overcome.  In the words of David Ortiz, "This is our f-----g city, and nobody is going to dictate our freedom."

Mark R. Jahnke ‘13, an FM Staff Writer and Crimson Publishing Associate, is a Near Eastern Languages and Civilizations concentrator in Pforzheimer House.